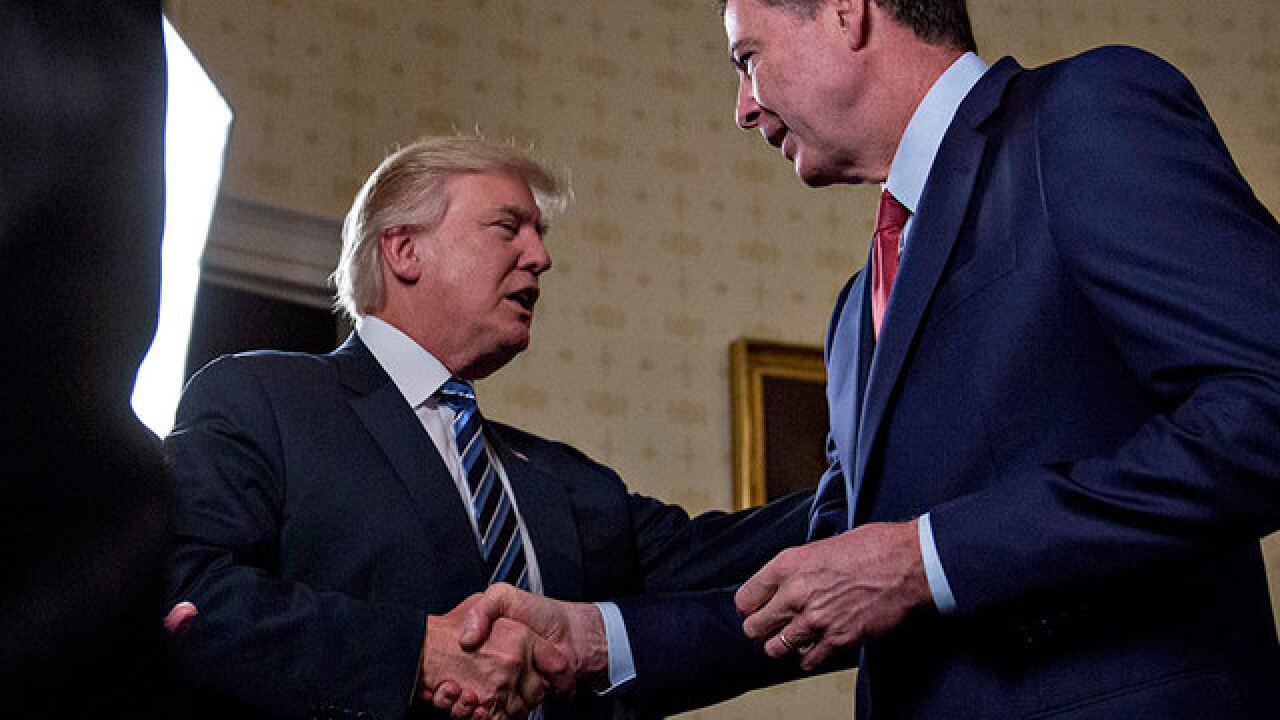 Image copyright 2017 Getty Images. All rights reserved. This material may not be published, broadcast, rewritten, or redistributed.
<p>President Donald Trump shakes hands with James Comey, director of the Federal Bureau of Investigation, during an Inaugural Law Enforcement Officers and First Responders Reception in the Blue Room of the White House on Jan. 22, 2017, in Washington, D.C.(Photo by Andrew Harrer-Pool/Getty Images)</p>

President Donald Trump repeatedly tried to woo former FBI Director James Comey through phone calls, private sit-downs and even a hug, according to a published account of their relationship by a Comey friend.

Benjamn Wittes, who runs a blog called Lawfare and describes himself as a Comey confidant, shared an extensive readout on his site Thursday of what he says Comey told him about his relationship with Trump. Wittes describes Comey as bothered by Trump's efforts to chit-chat with the FBI director, who traditionally is supposed to maintain a formal, clearly defined relationship with the president.

Wittes' allegations, first told to The New York Times, revolve mostly around what he learned directly from Comey at a lunch with him at the FBI in late March, Wittes says.

"While I am not in the habit of discussing with reporters my confidential communications with friends, I decided that the things Comey had told me needed to be made public," he wrote, adding that he was not speaking at "Comey's request."

Wittes claims that Comey repeatedly tried to "train" the Trump administration to only contact him through proper channels and said the White House was negligent about how involved a president should be in specific investigations.

"Comey was preoccupied throughout this period with the need to protect the FBI from these inquiries on investigative matters from the White House," he wrote. "Comey understood Trump's people as having neither knowledge of nor respect for the independence of the law enforcement function. And he saw it as an ongoing task on his part to protect the rest of the bureau from improper contacts and interferences from a group of people he did not regard as honorable."

Stories have emerged at a near daily rate about the Comey-Trump relationship ever since Trump fired him from the agency last week, leading to some of the public pressure for a special prosecutor to be named. Asked Thursday at a press conference if he had ever asked Comey to not investigate his former national security adviser, Michael Flynn, Trump issued a blanket denial: "No, no, next question."

Wittes said two specific incidents represented attempts by Trump to "compromise (Comey) or implicate him" by exposing him as too close with the President.

The first was when Trump invited law enforcement officials to the Oval Office to express his thanks for their work at the inauguration just days before. Comey was reluctant to attend, Wittes says, and tried his best to not have any personal conversation with Trump even when he did. At one point, Wittes relays, Comey stood in a position so that his blue blazer would blend in with the office's blue drapes in an effort for Trump to not notice him.

That tactic was unsuccessful; Trump later called him out by name, leading to a greeting captured on camera.

"Comey took the long walk across the room determined, he told me, that there was not going to be a hug. Bad enough that he was there; bad enough that there would be a handshake; he emphatically did not want any show of warmth," Wittes writes.

"Comey was disgusted. He regarded the episode as a physical attempt to show closeness and warmth in a fashion calculated to compromise him before Democrats who already mistrusted him."

Wittes also shared Comey's side of a phone call the FBI director had with the President, which Comey described "as weird for how substance-less it was" and included "an undercurrent of Trump's trying to get him to kiss the ring."

Wittes also exposes some possible tension between Comey and Deputy Attorney General Rod Rosenstein, who recommended to Trump that Comey be fired.

"His reservations were palpable. 'Rod is a survivor,' he said," Wittes recalls. "And you don't get to survive that long across administrations without making compromises. 'So I have concerns,'" he quotes Comey as saying.