The 10 Senate seats most likely to switch parties in 2018 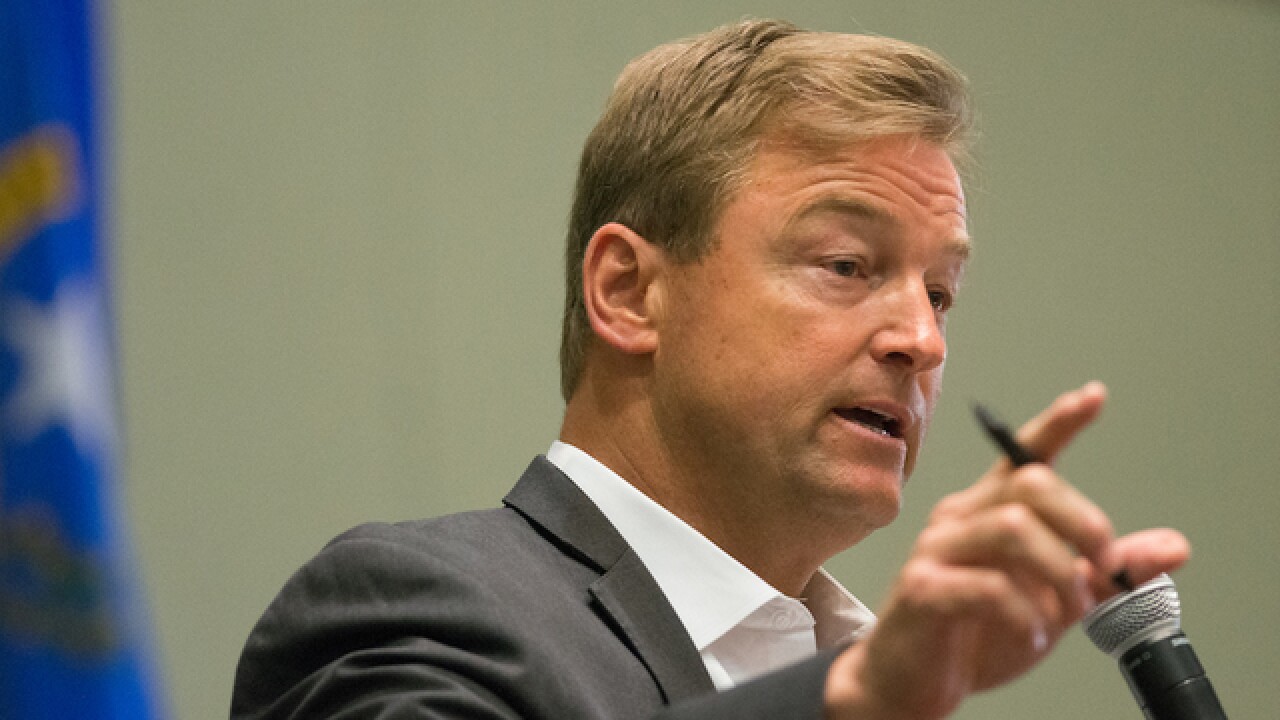 The GOP's Senate recruiting challenges -- failing to land candidates in some states, attracting too many candidates in others, while two vulnerable incumbents are also targeted from within -- mean the party faces a long list of internal battles. Only after those are settled can the GOP fully turn its attention to unseating Senate Democrats in the 2018 midterm elections.

The across-the-board primary battles are complicating what should be a hugely advantageous map for Republicans. Democratic senators are running for re-election in 10 -- that's right, 10 -- states that President Donald Trump won in 2016. The GOP, meanwhile, only has two members who currently look like they could be in real jeopardy.

At stake is control of the Senate, where the GOP currently holds 52 of 100 seats.

Here is CNN's first Senate race ranking of the 10 seats most likely to flip in 2018:

It's one of the earliest races to take shape -- and it's all bad news for Heller.

Danny Tarkanian, who has lost five campaigns over the last decade but won the GOP nomination in four of those five races, is taking on Heller in the Republican primary. And Rep. Jacky Rosen was hand-picked by Harry Reid to challenge Heller in the general election.

Heller also cast a potentially damaging vote for the Senate GOP's health care bill, sticking with party leadership (and with Trump, who had said while sitting beside Heller at a meeting before the vote: "He wants to remain a senator, doesn't he?")

Still, that vote could haunt Heller in 2018 -- particularly because it looked like a flip-flop after Heller stood weeks earlier with popular Republican Gov. Brian Sandoval at a news conference and denounced the House's version of the Obamacare repeal effort. He has also delivered confusing and contradictory answers on whether he supports Planned Parenthood funding.

The health care gymnastics complicate what already looked like a tough race. Heller was elected with just 46% of the vote in 2012. Four years later, Nevada was among the only swing states to favor Hillary Clinton over Trump.

Missouri attorney general Josh Hawley is moving toward a run against McCaskill. He's well-regarded by donors and operatives. And now that several Republicans who were widely expected to run, including Rep. Ann Wagner, have decided against entering the race, he could be looking at a clearer field.

The Republican tilt and Hawley's status as a top-tier challenger make this perhaps the GOP's strongest pick-up opportunity.

Just like McCaskill benefited from Todd Akin's now-infamous comments about "legitimate rape" in 2012, Donnelly benefitted when his Republican opponent, state treasurer Richard Mourdock, asserted in a debate that pregnancies resulting from rape are "God's will."

Neither of the two Republicans running against Donnelly -- Reps. Luke Messer and Todd Rokita -- are likely to make such a mistake in 2018.

However, this primary battle will be nasty and personal. Rokita and Messer have already called each other "unhinged." Rokita attacked Messer for moving his family to Washington after being elected to Congress, and criticized a contract Messer's wife has for part-time legal work for the city of Fishers.

Already, it has split Trump world, with Trump supporters in the state backing Rokita while Pence's allies are behind Messer. Democrats' hope is that their fight leaves the winner politically damaged headed into the fall.

If you had any doubt about this state's heavily Republican leanings, Gov. Jim Justice erased it when he switched parties at a rally alongside Trump -- who carried West Virginia with 68% of the vote -- last week.

But Manchin isn't your average Democrat.

Perhaps more than any other senator, he was helped by Trump's victory. A world in which Manchin spent two years casting votes for a Clinton agenda would have put him in much graver danger than one where he has kept a cordial relationship with Trump and maintained his own centrist brand, while enjoying the freedom to oppose the GOP's politically unpopular health care effort.

RELATED - Joe Manchin: 'Don't give a s--t' about attacks

Before Flake can even worry about a Democratic challenger, he has to sweat a potentially formidable primary from his own party.

Flake's publication of an anti-Trump conservative tome has state treasurer Jeff DeWit and former Arizona Republican chairman Robert Graham both looking hard at a run against him. And Trump, who pledged in the fall to spend $10 million of his own money to unseat Flake, is clearly holding the grudge -- with DeWit and Graham both in regular contact with the White House.

If Flake makes it to the general election, his willingness to criticize Trump could appeal to moderate voters. But Democrats will contrast him with Arizona Sen. John McCain and argue that while McCain cast a vote on health care that actually stymied Trump's agenda, Flake has voted with the President on key issues.

Still, it's a red-leaning state. And while Democrats expect a strong challenger -- Rep. Kyrsten Sinema and Phoenix Mayor Greg Stanton are usually the first names to come up -- they don't have one yet.

Tester is up for re-election in a state where Trump won 56% of the vote. So it seemed like a major pickup opportunity for Republicans -- that is, until Greg Gianforte body-slammed a reporter on the eve of his special election victory in a House race.

You're saying: Wait, what?

Here's how it's all connected: Gianforte was a top prospect to run for Montana governor in 2020. But after his body-slam of The Guardian's Ben Jacobs, he's seen politically as damaged goods. So Montana attorney general Tim Fox -- who was likely to run against Tester -- now has his eyes on the governor's office instead.

Now, Republicans have turned to state auditor Matt Rosendale to take on Tester in the battle of the two best flat-tops in politics.

Something to watch with Rosendale: Billings Judge Russell Fagg, who is considering entering the race, recently took a shot at Rosendale for moving from Maryland to Montana 16 years ago -- saying his own "four generations of Montana roots, all the way back to the late 1800s" make him better qualified to represent the state.

On paper, it seems Heitkamp ought to be at the very top of this list. She's a Democrat who barely eked out a victory in 2012 running for re-election in a state where Trump won 64% of the vote.

However, Heitkamp -- who hasn't officially announced she's running for re-election herself, but is fundraising like a candidate -- has $3 million in the bank, she's held events all across a state with a small enough population that retail politics works, and she doesn't have a Republican opponent.

The most buzzed-about prospects are state Sen. Tom Campbell and Rep. Kevin Cramer. But until one -- or another Republican with a profile in North Dakota and/or money to spend -- jumps in, Heitkamp is in a strong position.

So far, Marine Corps veteran and businessman Kevin Nicholson is in the race, while state Sen. Leah Vukmir, businessman Eric Hovde and others are weighing bids of their own.

The well-known Brown's populist, anti-free trade brand fits Ohio's white working-class voters better than Hillary Clinton's message did in 2016. But this is still a state where Trump won by 9 percentage points.

Brown is headed into a likely rematch against state treasurer Josh Mandel. Why this is a precarious race for Brown: Mandel has $3.3 million in the bank and national Republicans have shown they are willing to spend heavily on Ohio -- even to back a candidate they don't love.

This one's all about Florida Gov. Rick Scott. In an extraordinarily expensive state, Scott -- whose term as governor ends next year -- could pump tens of millions of his own dollars into a race against the tough, well-known incumbent Nelson.

Scott is clearly interested in maintaining a voice in national politics. In May, he launched his "New Republican" super PAC. And Trump has lobbied Scott to run against Nelson.

The question is whether the two-term executive is interested in being just one of 100 -- and the junior senator to Florida's Marco Rubio.

If Scott enters the race, this one rockets up the list.

In Pennsylvania, Democratic Sen. Bob Casey is waiting to see how the Republican field shakes out in a state Trump narrowly won in 2016. Meanwhile, Texas Sen. Ted Cruz was actually outraised by Democratic Rep. Beto O'Rourke in 2017's second quarter -- showing that, if things really break right for Democrats, O'Rourke could be an online fundraising darling headed into the fall of 2018.