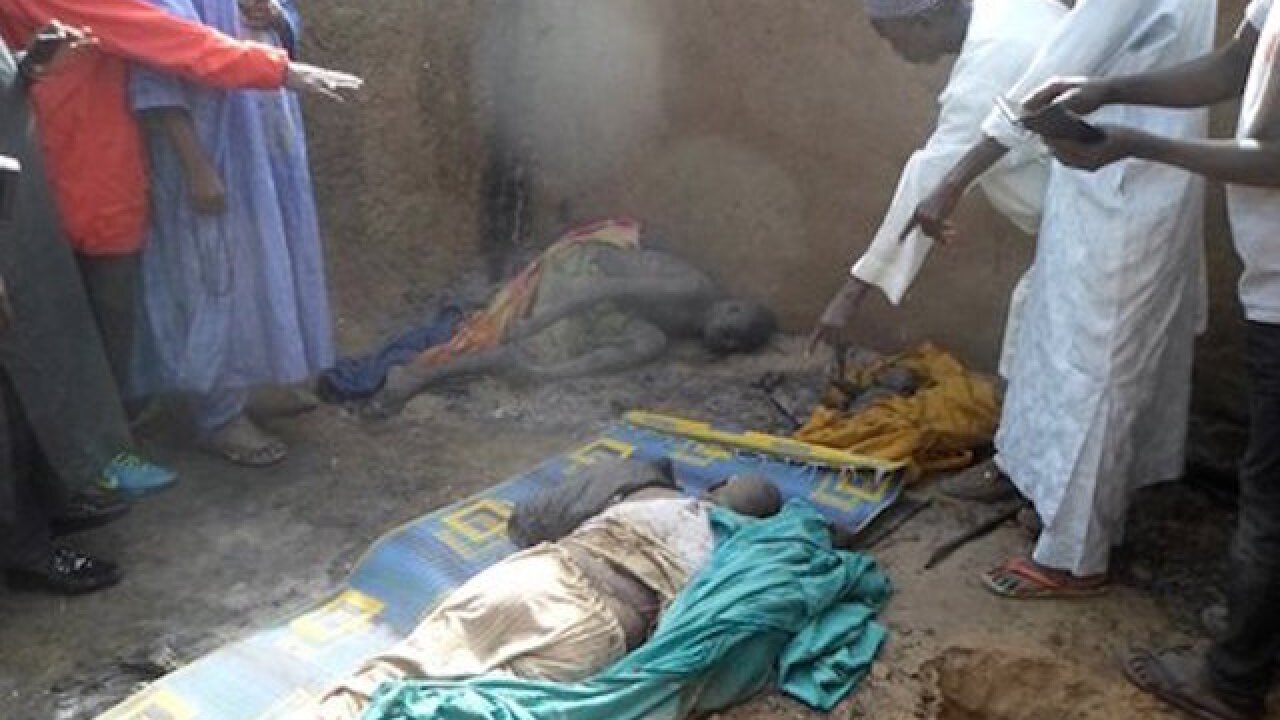 Jossy Ola
<p>People gather around the body of a man and his children killed following an attack by Boko Haram in Dalori village 5 kilometers (3 miles) from Maiduguri, Nigeria, Sunday Jan. 31, 2016. A survivor hidden in a tree says he watched Boko Haram extremists firebomb huts and listened to the screams of children among people burned to death in the latest attack by Nigeriaí s homegrown Islamic extremists. (AP Photo/Jossy Ola)</p>

DALORI, Nigeria (AP) — A survivor hidden in a tree says he watched Boko Haram extremists firebomb huts and heard the screams of children burning to death, among 86 people officials say died in the latest attack by Nigeria's homegrown Islamic extremists.

Scores of charred corpses and bodies with bullet wounds littered the streets from Saturday night's attack on Dalori village and two nearby camps housing 25,000 refugees, according to survivors and soldiers at the scene just 5 kilometers (3 miles) from Maiduguri, the birthplace of Boko Haram and the biggest city in Nigeria's northeast.

The shooting, burning and explosions from three suicide bombers continued for nearly four hours in the unprotected area, survivor Alamin Bakura said, weeping on a telephone call to The Associated Press. He said several of his family members were killed or wounded.

The violence continued as three female suicide bombers blew up among people who managed to flee to neighboring Gamori village, killing many people, according to a soldier at the scene who insisted on anonymity because he is not authorized to speak to journalists.

Troops arrived at Dalori around 8:40 p.m. Saturday but were unable to overcome the attackers, who were better armed, said soldiers who spoke on condition of anonymity because they were not authorized to speak to the press. The Boko Haram fighters only retreated after reinforcements arrived with heavier weapons, they said.

Journalists visited the carnage Sunday and spoke to survivors who complained it had taken too long for help to arrive from nearby Maiduguri, the military headquarters of the fight to curb Boko Haram. They said they fear another attack.

Eighty-six bodies were collected by Sunday afternoon, according to Mohammed Kanar, area coordinator of the National Emergency Management Agency. Another 62 people are being treated for burns, said Abba Musa of the State Specialist Hospital in Maiduguri.

Boko Haram has been attacking soft targets, increasingly with suicide bombers, since the military last year drove them out of towns and villages in northeastern Nigeria.

The 6-year Islamic uprising has killed about 20,000 people and driven 2.5 million from their homes.