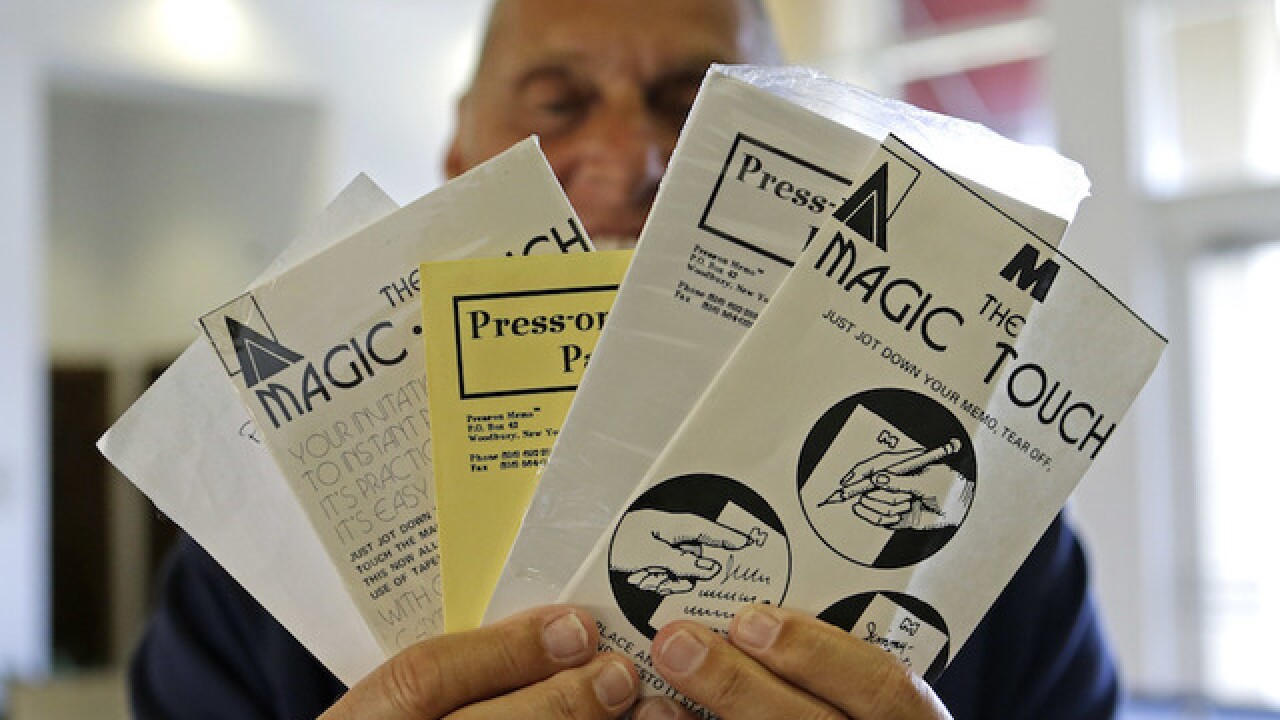 FORT LAUDERDALE, Fla. (AP) — Alan Amron has invented a battery-powered squirt gun, a digital photo frame, even a laser system that may someday provide a visible first-down line for fans inside NFL stadiums. He holds 40 U.S. patents, but he's most interested in an invention for which he gets no credit: the Post-it Note, that ubiquitous sticky-back product made into a worldwide success by the 3M Company.

Amron, 67, says he invented what he called the Press-on Memo in 1973, a full year before 3M scientists developed what later became known as the Post-it Note. Although Amron settled a previous lawsuit against 3M, he's suing again in federal court in Fort Lauderdale. He says the company breached its previous agreement not to take credit. The settlement is confidential.

Now Amron wants $400 million in damages — and something he says is even more important to him.

"l just want them to admit that l am the inventor and that they will stop saying that they are the inventor," Amron said in a recent interview. "Every single day that they keep claiming they invented it damages my reputation and defames me."

3M, based in Maplewood, Minnesota, is one of the 30 companies that make up the Dow Jones Industrial Average on the New York Stock Exchange. The maker of Scotch tape, Ace bandages, sandpaper, films, office products, window insulation, paint remover and hundreds of other products earned more than $30 billion in revenue in 2015, according to the company's website.

The company says Post-it Notes were invented by 3M scientists Arthur Fry and Spencer Silver, both members of the National Inventors Hall of Fame. Silver came up with the adhesive — one that could be used over and over yet not mar surfaces to which it attached — and Fry the idea of using it for the small, yellow squares of paper to become sticky-back notes.

"3M developed Post-it Notes without any input or inspiration from Mr. Amron and it is false and misleading for him to state or suggest that he created, invented, or had any role in the product's development," said company spokeswoman Donna L. Fleming Runyon in an email.

On Friday, Runyon added that 3M was within its rights under the previous settlement to claim credit for creating the Post-it Note.

"There was nothing in the settlement agreement that limited what 3M could say," she said.

Fry, now 84 and retired, is named as a defendant in Amron's lawsuit, but Silver is not. Fry did not respond to an email and a phone message seeking comment. Silver also is retired, Runyon said.

The history of invention is full of people competing for credit for the same idea, and often things come about because smart people are working separately. Take the microchip: Texas Instruments and Fairchild Semiconductor battled for a decade in court over who came first and deserved the patent, deciding amid the wrangling it was best to work out a licensing deal for both companies.

Amron said his idea in 1973 came about with chewing gum. He was looking for a way to stick a note on his refrigerator for his wife and used gum, providing inspiration for the adhesive he would use on his Press-on Memo. That year he took the sticky notes to a New York trade show and met briefly with two 3M executives, Amron said, but nothing came of the meeting.

Fry and Silver came up with what 3M originally called the Press 'n' Peel memo pad in 1974, but it wasn't brought to the market until 1977 and didn't really take off until 1980, when it was renamed the Post-it Note. It's now one of the top-selling items in 3M's consumer products division, which in 2015 earned $4.4 billion for all products, company figures show.

Post-it Notes have become so iconic that in the 1997 movie "Romy and Michele's High School Reunion," the title characters, played by Lisa Kudrow and Mira Sorvino, claim credit for inventing them to impress their former classmates.

It was also in 1997 that Amron sued 3M claiming he was the true inventor. The case was settled, and Amron agreed to release the company from any future claims, which intellectual property lawyers say could make his new Florida lawsuit difficult to win.

"I would predict what he has left perhaps is the enforcement of a settlement agreement but not the claims he is pursuing," said Miami attorney Jeffrey Feldman, who is not involved in the case. "The first thing I would want to know is whether or not there was an agreement between them regarding who was allowed to say what."

Amron said the agreement was that neither could claim credit because, years earlier, a Swiss inventor had supposedly devised a similar product. But that turned out to be a less-useful adhesive, not the entire sticky note, and Amron said he felt 3M used the Swiss tale to trick him into the settlement — and is now breaching that deal by claiming credit for the product.

No trial date is set for Amron's lawsuit. Runyon said 3M will file a dismissal motion next week on an amended version of his complaint, based in part on the prior settlement of similar claims. A federal judge has ordered both sides into mediation to possibly reach a agreement and set various legal deadlines through December of this year.