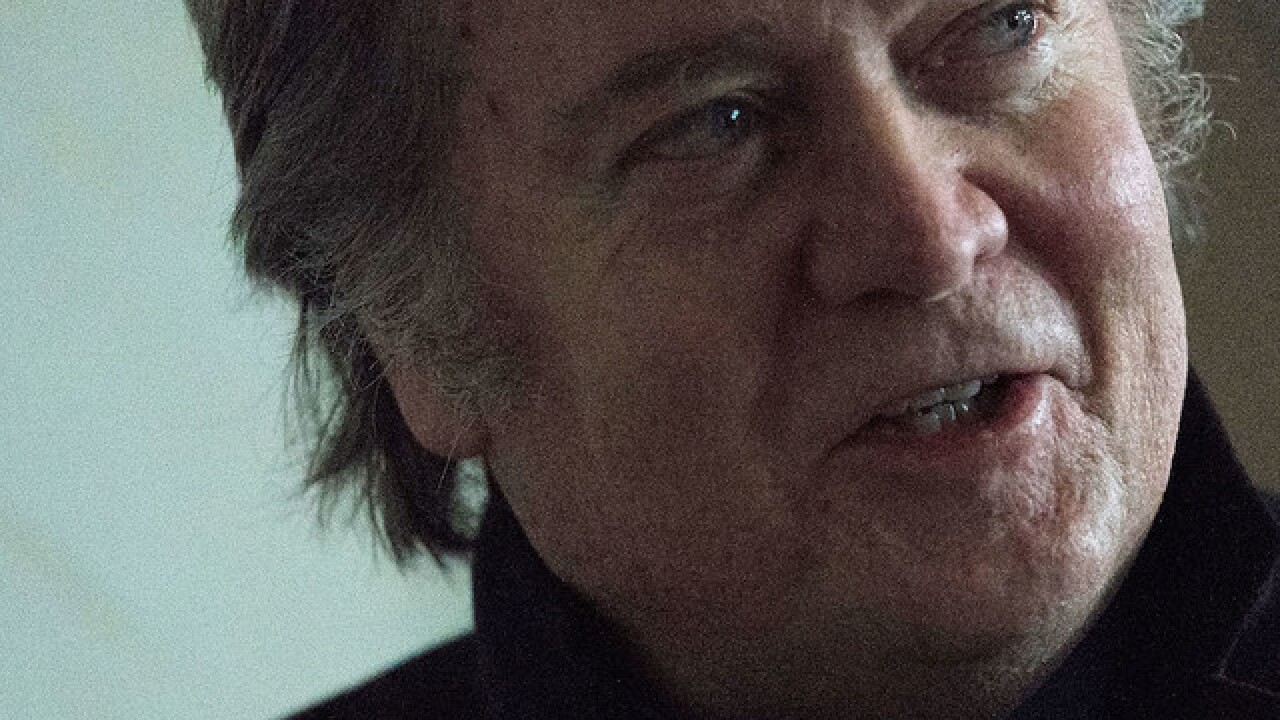 Amid a tense feud with Congress, Steve Bannon appeared Thursday for a hearing before the House Intelligence Committee - hours after the White House informed lawmakers he would not be answering key questions pertinent to the Russia investigation.

But Bannon declined to answer questions from members about a range of topics after the 2016 campaign season, referring to a list of roughly two dozen questions authorized by the White House that he could answer, according to two sources.

The White House sent a letter to Capitol Hill late Wednesday laying out its explanation for why Trump's transition period falls under its authority to assert executive privilege, a move intended to shield Bannon from answering questions about that time period, according to a person familiar with the discussions.

But House members from both parties have so far rejected that broad interpretation of executive privilege, raising the stakes for Bannon's standoff with Congress.

Lawmakers from both parties said Bannon should be held in contempt if he failed to appear for the scheduled interview Thursday morning, a date that has already been pushed back three times as the committee has fought with Bannon's lawyer and the White House over the scope of the lawmakers' questions.

"We have to hold him in contempt" if he fails to show up, one GOP source said.

Bannon was hit with a subpoena during his initial testimony last month for refusing to discuss questions about his time in the White House and the presidential transition, angering lawmakers from both parties for claiming he had to reserve the right for the White House to invoke executive privilege. The subpoena is still pending.

Bannon is one of several key Trump associates whose testimony has been delayed before the House panel. The others include Corey Lewandowski, the President's former campaign manager, who told the panel in his testimony last month that he wasn't prepared to answer questions about matters after he was dismissed from the campaign in June 2016. While Democrats have demanded Lewandowski be hit with a subpoena to reappear before the panel to answer more questions, Republicans have resisted.

"I don't think he needs to be subpoenaed," Florida's GOP Rep. Tom Rooney, a key member of the panel, said of Lewandowski. "I think he came in and answered eight hours' worth of questions based on the letter we sent him and his employment with the Trump Organization and Trump campaign. ... We did not ask him to come in to answer questions about his time as a private citizen -- so I think that's clearly a difference between him and Steve Bannon."

But on Bannon, Republicans have joined Democrats in expressing anger over his refusal to answer questions.

Bannon's legal team and the White House have negotiated with the House's lawyers about his return appearance and what questions he could answer, while pushing back the deadline of the subpoena as the talks dragged on. When last week's deadline was moved back for another week, Rep. Adam Schiff of California said the White House had offered a list of 14 yes-or-no questions Bannon could answer. (He would have answered "no" to all of them, Schiff said.)

A source familiar with Bannon's thinking had said previously that he was prepared to be held in contempt for defying the House panel.

Schiff, the ranking Democrat on the panel, told CNN Wednesday evening that he has urged Republicans not to agree to limit the scope of the questions Bannon could answer -- and he has called on the panel to be prepared to hold Bannon in contempt.

"We have told them they shouldn't agree to any restrictions apart from the proper exercise of executive privilege, which has not been invoked by any witness to date," Schiff said.

Rep. Mike Conaway, the Texas Republican leading the committee's Russia investigation, told CNN Tuesday evening that there appears to be an agreement between the House counsel and Bannon's side for his return testimony. But Conaway wouldn't say what questions Bannon may answer -- and he declined to say if he'd agree to hold Bannon in contempt if he refused to answer questions.

Bannon's decision not to talk about those periods with Congress has come as his team has indicated his willingness to answer any questions that special counsel Robert Mueller may have, a stance that has further annoyed lawmakers in both parties.

Republicans say they're particularly at odds with Bannon's stance that executive privilege could extend to the transition period, and say they're worried about the precedent it would set.

But Democrats charge that Conaway and House Intelligence Chairman Devin Nunes, R-California, haven't shown a willingness yet to hold Bannon accountable for flouting Congress if he ignores the subpoena.

"If they don't force him to answer legitimate questions, they will be ceding Congress' authority, and we'll be setting a very, very dangerous precedent that people can just tell Congress what they will and will not answer, and will show no resolve to use our subpoena power to get to the bottom of what's going on," said Rep. Eric Swalwell, a California Democrat.