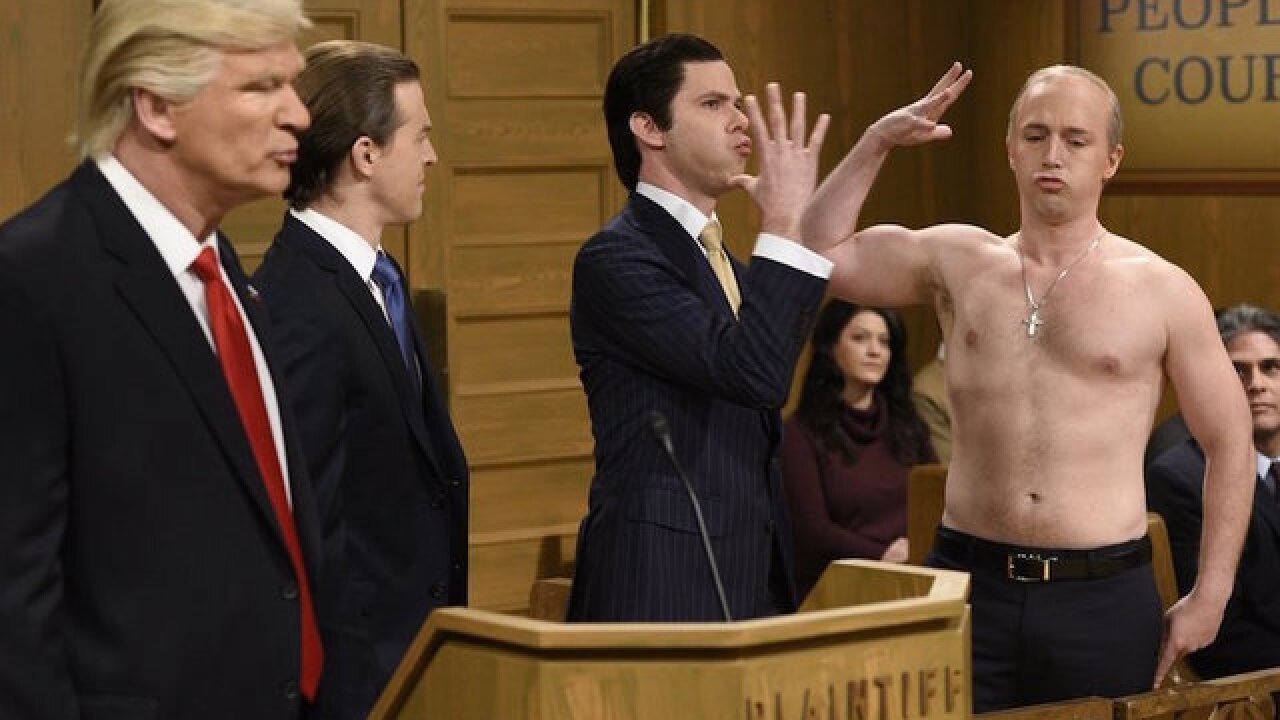 © 2017 Cable News Network, Inc.
Will Heath/NBC
<p>President Donald Trump said &quot;see you in court&quot; -- and &quot;Saturday Night Live&quot; obliged. The NBC show brought back Alec Baldwin, this time as both its host and to lampoon the leader of the free world, for a sketch that had the President having his day in court over his blocked travel ban.</p>

The NBC show brought back Alec Baldwin, this time as both its host and to lampoon the leader of the free world, for a sketch that had the President having his day in court over his blocked travel ban.

The sketch had Baldwin's Trump taking on the 9th Circuit Court of Appeals judges who declined to reinstate the travel ban.

"Mr. Trump, you understand that this is a TV court, right?" said "The People's Court" judge, who was played by Cecily Strong.

The fake Trump began his case by saying that he signed, but didn't read, the "tremendous" travel ban and that he wanted it reinstated.

This then led to him bringing out a character witness: a bare-chested Russian President Vladimir Putin, played by Beck Bennett.

Away from mocking Trump, Baldwin hosted the NBC variety series for a 17th time, a record for the show.

Baldwin's schtick went as far as the "SNL" title cards, one of which that had the actor wearing a red "Make America Laugh Again" hat.

Baldwin got some help taking on the Trump administration thanks to the return of Melissa McCarthy as White House press secretary Sean Spicer.

One week after McCarthy made waves as a screaming, Super Soaker wielding Spicer, the actress opened the show again berating the White House press corps.

Referring to herself as "Spicy," McCarthy's Spicer used props to explain the travel ban, as well as a leaf blower on one of the reporters at the press conference.

"You know what that was? That was me blowing away their dishonesty," the fake Spicer said.

McCarthy's Spicer also read from a list of terrorist attacks that aren't being covered by the media, including "The Slaughter at Fraggle Rock" and "The Night They Drove Old Dixie Down."

The sketch ended with McCarthy's Spicer riding the podium of the briefing room into the reporters, causing them to run throughout the room.

"Spicy" then turned toward the camera and said the show's signature phrase, "Live from New York... It's Saturday Night!"