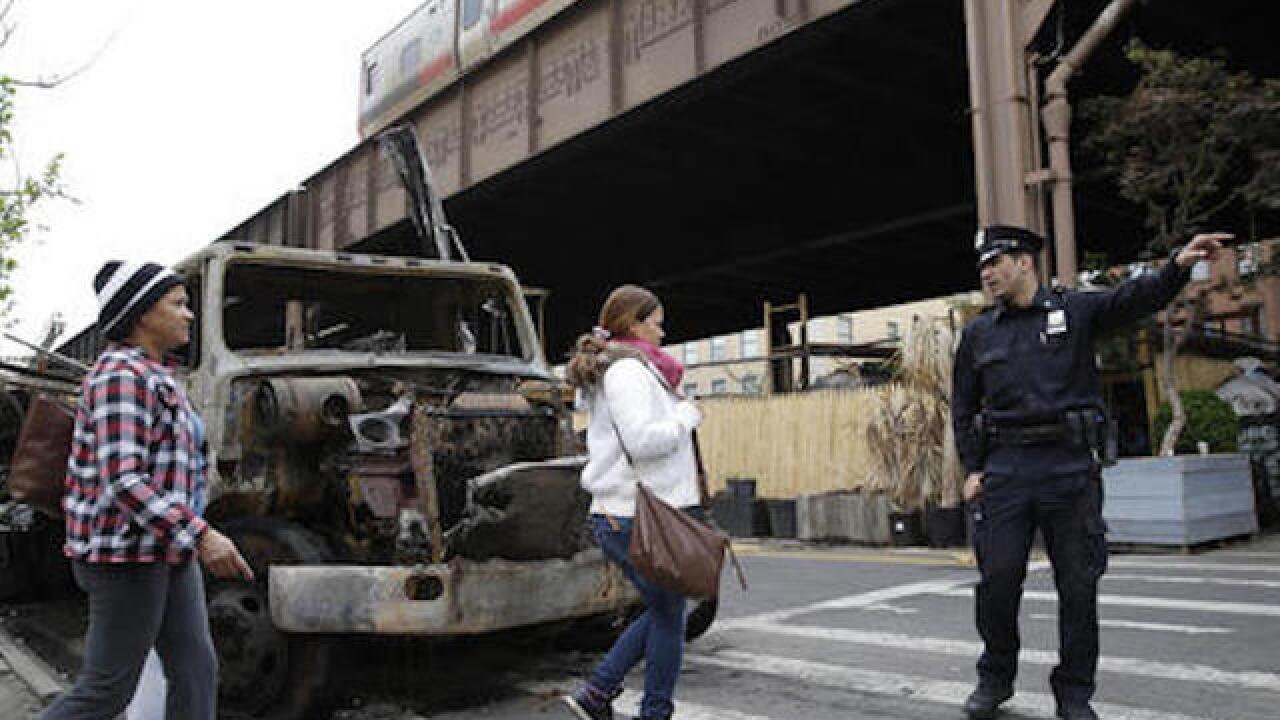 Copyright Associated Press
Seth Wenig
<p>As a Metro-North train passes over, a police officer directs pedestrians around the site of an extinguished fire in New York, Wednesday, May 18, 2016. Commuters into and out of New York's famed Grand Central Terminal faced crippling delays Wednesday, a day after a raging fire broke out beneath elevated train tracks in the city, officials said. (AP Photo/Seth Wenig)</p>

NEW YORK (AP) — An estimated 150,000 commuters into and out of New York's famed Grand Central Terminal faced crippling delays Wednesday, one day after a raging fire broke out beneath elevated train tracks in the city, officials said.

The blaze Tuesday night at a garden center underneath Metro-North tracks north of the station in Manhattan's East Harlem section halted train service and left thousands of commuters stranded on their way home.

Metro-North said two of the four tracks in the area of the fire were operational for Wednesday's morning rush. Trains were slowed from their normal 60 mph to 30 mph as repairs continue.

The fire caused damage to a center column beneath the elevated tracks.

"You can see the damaged column in the center. We have to take the load off that structure ... and transfer it to other places so that the center beam can be supported so the two inside tracks can go back into service," MTA Chairman and CEO Thomas Prendergast told WNYW's "Good Day New York" on Wednesday morning.

The MTA said about 150,000 commuters were affected by the disruption. But they seemed to take the inconvenience in stride.

"I had to stand the whole time. I was only delayed like 30 minutes," said Mike Joshi, who got on at Southport, Connecticut, headed to New York for his teaching job in Brooklyn.

Commuters were warned to expect long delays and crowded conditions, and officials encouraged customers to work from home or find alternate travel plans.

"Crews inspected all elements, including the supports, track, power and signal, and ran test trains to ensure safety" before reopening the tracks, according to a statement released by the Metropolitan Transportation Authority early Wednesday.

The commuter line is running on a Saturday schedule and is at 60 percent capacity, MTA spokeswoman Meredith Daniels said.

More than 150 firefighters responded to the blaze, which officials said also involved construction debris and several trailers and vehicles and may have blown off bolts from the tracks.

"The fire was so hot that they could hear the rivets, the bolts popping," Cuomo said.

Buildings on both sides of the street were evacuated.

"I opened my window to climb down on my fire escape, and the smoke started getting more heavier," Antone Rosas told the television station.

One firefighter suffered a minor injury when he slipped, but no civilians were hurt.

"They got in there, they contained the fire to this one area," said James Leonard, chief of department for the Fire Department of New York. "Hopefully, we contained the damage, and we can get the people back on the railroad."