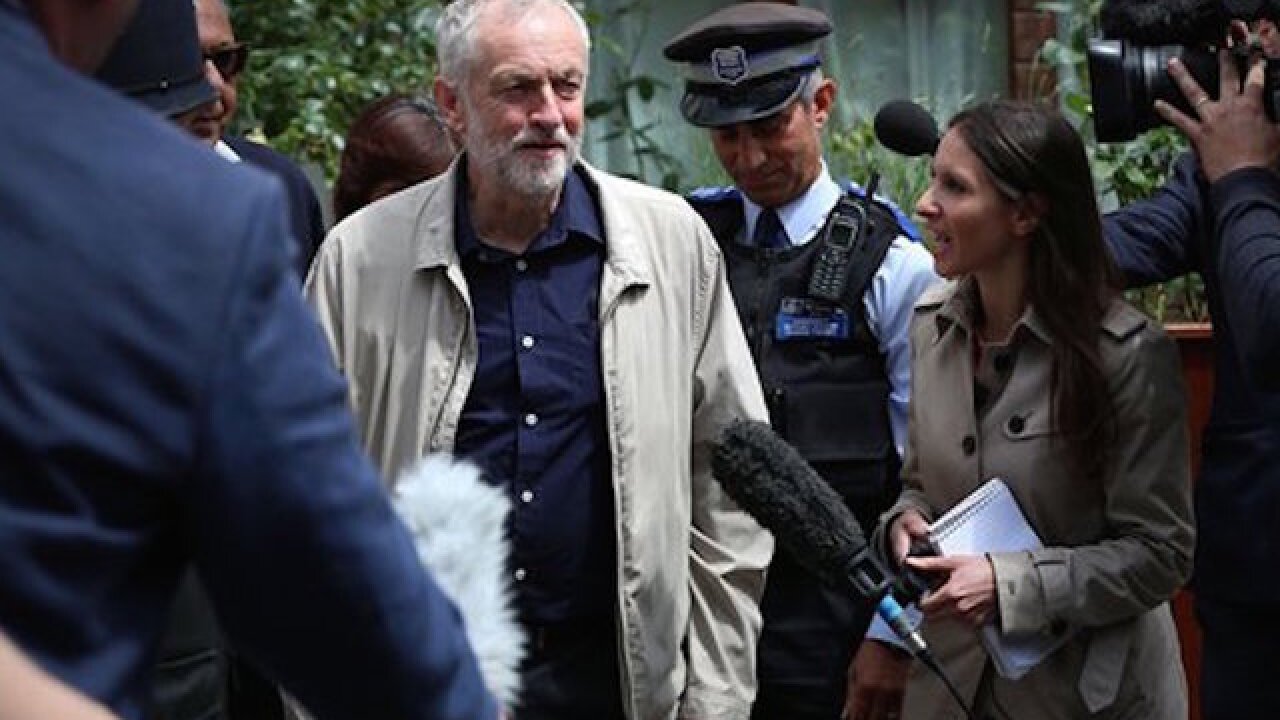 Isabel Infantes
<p>Labour party leader Jeremy Corbyn faces the media as he leaves his house in London, Sunday June 26, 2016. Corbyn seems to be facing a revolt by some members of his shadow cabinet, as a string of shadow ministers have quit Sunday citing his leadership during the EU referendum campaign. (Isabel Infantes / PA via AP) UNITED KINGDOM OUT - NO SALES - NO ARCHIVES</p>

LONDON (AP) — Britain faced unending political chaos Sunday as Scotland's leader declared the Scottish parliament might try to block Britain's exit from the European Union and lawmakers in the opposition Labour Party revolted against their chief for his lackluster efforts to convince British voters to stay in the bloc.

On the continent, European leaders stepped up the pressure on Britain to begin its extrication from the 28-nation EU immediately rather than wait several months as British Prime Minister David Cameron prefers. Cameron, head of the failed 'remain' side in Britain's historic referendum, announced Friday that he will step down by October and will not take part in the negotiations with the EU.

As at least eight top Labour figures resigned Sunday in protest, party leader Jeremy Corbyn could even become the next senior figure on the 'remain side' to lose his job.

The U.K-wide vote to leave the EU was very unpopular in Scotland, where 62 percent voted to stay, and Scottish leader Nicola Sturgeon said Sunday that she would consider advising the Scottish Parliament to try to block the move by withholding its "legislative consent" for a British exit, often called a Brexit.

"If the Scottish Parliament was judging this on the basis of what's right for Scotland, then the option of saying 'We're not going to vote for something that is against Scotland's interests,' of course, that is on the table," she said of the possibility of withholding consent.

Sturgeon said she believes Scotland's consent is required for the move but conceded the British government would likely take "a very different view."

The Scottish question looms large because Sturgeon has also said another referendum on Scottish independence from Britain is "highly likely" as a result of Britain's decision to leave the EU.

Sturgeon, along with leaders in Northern Ireland, is seeking ways to keep ties with the EU despite the Brexit vote. Northern Ireland voters also indicated a preference for staying in the bloc.

In Northern Ireland, Deputy First Minister Martin McGuinness said his priority is forging "special arrangements" to enable Northern Ireland to maintain its EU ties. Some Brexit opponents have also talked of trying to use Northern Ireland's Assembly to try to block Britain's departure from the EU.

"In the weeks and months ahead, we will be working with both the Scottish government and the Northern Ireland executive on all these matters," she told BBC. "But ultimately it is (the British) parliament's decision."

Britain's Parliament is expected to approve Brexit based on the results of the non-binding referendum vote Thursday. The 52-48 percent vote in favor of exiting from the EU has already cut short Cameron's career and now is threatening the future of Labour's Corbyn.

The embattled opposition leader, criticized by many for doing a weak job presenting the party's position favoring EU membership, for the first time faces an open revolt.

Eight members in Labour's so-called "shadow cabinet" — senior figures who advise the Labour leader on topics such as the economy or health care — resigned Sunday after Corbyn fired shadow foreign secretary Hilary Benn overnight. The dissidents want Corbyn, who represents the far-left wing of the Labour party, out before the next general election, which may happen sooner than expected because of the Brexit turmoil.

"I do not believe you have the capacity to shape the answers our country is demanding and I believe that if we are to form the next government, a change of leadership is essential," she wrote bluntly to Corbyn.

Corbyn did not respond publicly to the coordinated assault on his leadership, but senior allies said he would remain party leader and still has strong support among the party's rank-and-file members. He still has the support of more than half of his shadow cabinet and plans to fill the vacated positions.

Cameron, meanwhile, has said he will resign when a new leader of the Conservative Party is chosen before a party conference in October.

It's possible the new Conservative party leader, who would become the country's prime minister, would call a "snap election" to validate his or her position. Corbyn's opponents want a different leader in place for Labour in case that happens.

Meanwhile, anguish over the vote affected many of the 1.2 million British expats living elsewhere in Europe.

Tad Dawson, a 51-year-old pub owner who has lived in Spain since the 1990s, says his future is suddenly very uncertain.

"We're very scared because I've been here 23 years. I've got my house. My kids were born here, they went to a British-Spanish school. I've got a bar. I've got a lot to lose," Dawson said at his pub in Benidorm, which was decked out with red-and-white English flags.

"The Brexit hangover has only just begun," said Charlie Miller, a 24-year-old from West Berkshire who works in advertising in Dubai.