Decision on DACA will come on Tuesday, White House says 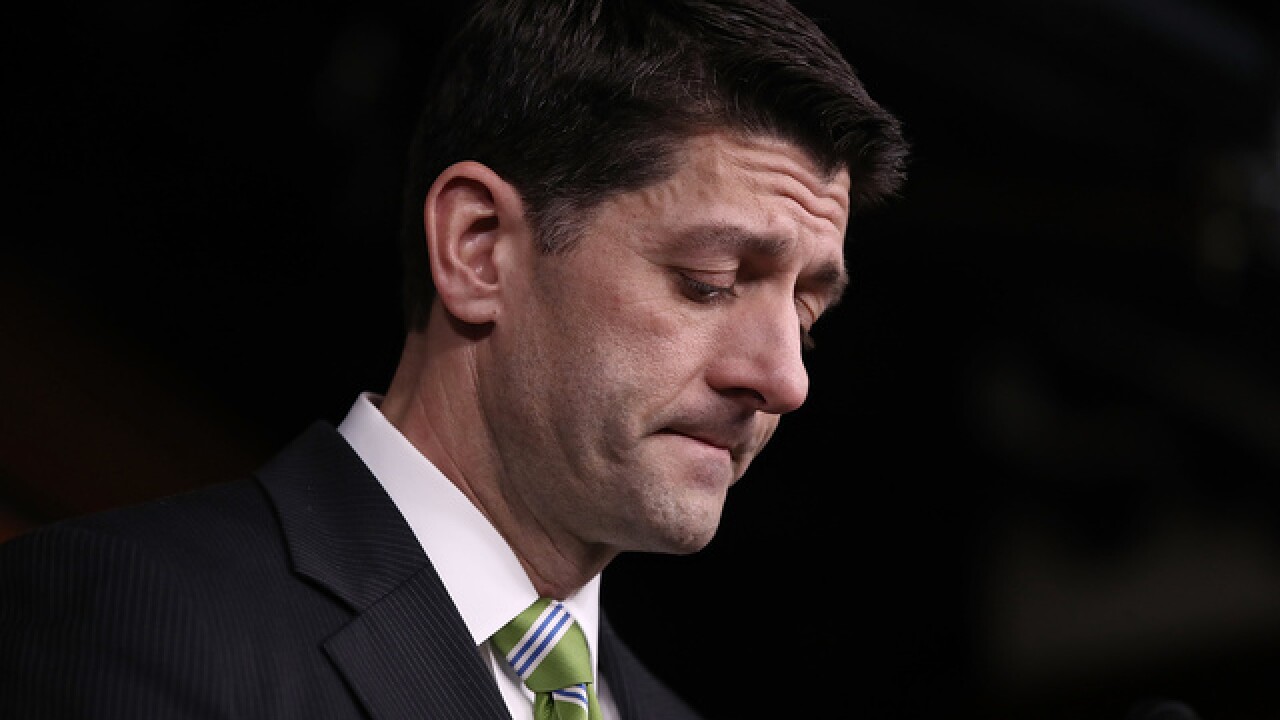 Copyright Getty Images
Win McNamee
<p>WASHINGTON, DC - MARCH 24: U.S. Speaker of the House Paul Ryan answers questions at a press conference at the U.S. Capitol after President Trump's healthcare bill was pulled from the floor of the House of Representatives March 24, 2017 in Washington, DC. In a big setback to the agenda of President Donald Trump and the Speaker, Ryan cancelled a vote for the American Health Care Act, the GOP plan to repeal and replace the Affordable Care Act, also called 'Obamacare.' (Photo by Win McNamee/Getty Images)</p>

House Speaker Paul Ryan on Friday gave a major boost to legislative efforts to preserve protections for young undocumented immigrants -- and urged President Donald Trump to not tear up the program.

Trump told reporters Friday he was still mulling the decision. The White House press secretary said a decision would be announced Tuesday.

Responding to a question about Deferred Action for Childhood Arrivals, or DACA, on his hometown radio station WCLO in Janesville, Wisconsin, Ryan said Congress was working on a legislative fix to preserve the program.

"I actually don't think he should do that," Ryan said of Trump's consideration of terminating the program. "I believe that this is something that Congress has to fix."

Ryan's statement offers the most public support by anyone in the Republican congressional leadership for some sort of legislation to protect the "Dreamers" under DACA.

Asked about Ryan's comments and a timeline for making an announcement, White House press secretary Sarah Sanders would only say the decision is still being finalized.

"We're in the process of finalizing that decision and those details, and we'll announce that on Tuesday," Sanders said.

She added the decision is "weighing on" Trump.

"He's making sure he takes the diligent time and effort and attention that this very important issue deserves," she said.

The popular Obama administration program -- which gives protections from deportation to undocumented immigrants that were brought to the US as children to work or study -- has long been targeted by Republicans as an overreach of executive authority.

Nevertheless, a number of moderate Republicans alongside Democrats support the program and have offered legislation that would make the protections permanent.

Ryan, who worked on comprehensive immigration reform before he became part of House leadership, endorsed that approach in the interview.

"President (Barack) Obama does not have the authority to do what he did ... we've made that very clear," Ryan said in the radio interview. "Having said all of that, there are people who are in limbo. These are kids who know no other country, who were brought here by their parents and don't know another home. And so I really do believe there that there needs to be a legislative solution."

Asked whether he's made a decision on DACA, Trump said: "Sometime today, maybe over the weekend."

"We love the Dreamers," he said.

The Trump administration has been discussing for weeks what to do about DACA, responding to the deadline on an ultimatum issued by 10 state attorneys general, led by Texas. The threat: Sunset DACA by September 5 or the states will try to end it in court.

Discussions have heated up this week as officials have met to chart a path forward. While a decision had been possible Friday, and one source familiar had believed a decision was pending Friday morning, by midday, sources familiar with the deliberations did not expect a decision before the weekend. Later, Sanders set the new timeline of Tuesday.

Parts of the Department of Homeland Security, which administers DACA, have been told to prepare for a decision but have not been given any potential details of what a decision may be.

Sources inside and outside the administration said the White House continues to explore buying itself time and is also considering allowing the attorneys general to proceed with their threat.

That course of action could potentially remove pressure from the White House, where the President has promised to act with "heart" on the matter and give Congress time to pass a legislative fix, and one source said it was under consideration.

Any action by the President to sunset DACA would put immediate pressure on Congress to act, something the White House and a senior congressional source recognize would be a challenge with many other pressing priorities at the moment, from Harvey relief to the debt ceiling to government spending. A go-slow approach on DACA is preferred, the congressional source added.

Ryan has long been sympathetic to the plight of Dreamers. At a CNN town hall at the beginning of the year, Ryan was asked by a young woman protected under DACA whether he wanted her deported. He said he was working with the Trump administration and seeking a "humane solution."

"What we have to do is find a way to ensure that you can get right with the law," the speaker told the young woman.

Nevertheless, Ryan has also voted alongside Republicans for years in efforts to strip funding from deferred action or end it, and Ryan's office emphasized he is not supportive of the executive version of the program.

Ryan spokeswoman AshLee Strong emphasized after the interview: "The speaker does not agree with President Obama's DACA overreach. He believes it is Congress's responsibility to set immigration law."

That woman from the town hall, Angelica Villalobos, told CNN Friday that she hopes Ryan's comments aren't "too late."

"He did nothing for the last eight months," Villalobos said. "I feel like it's a last-ditch effort, saying something about DACA. I don't know if it's a little too late. And I really hope and I wish that he done or said something sooner. No matter what happens, Ryan is just as responsible as Trump if we lose DACA protection."

Until now, leadership has not helped the push by moderate Republicans to advance legislation to do so. Four different options have been introduced in Congress, including two bipartisan solutions led by Sens. Lindsey Graham, a South Carolina Republican, and Dick Durbin, an Illinois Democrat. Another proposal from Florida Republican Rep. Carlos Curbelo has entirely Republican support and is expected to be introduced in a similar form in the Senate by North Carolina Republican Thom Tillis.

In addition to Ryan's endorsement, another conservative boost on Friday came from Utah Sen. Orrin Hatch, a staunch conservative who has in the past supported immigration reform.

"I've urged the President not to rescind DACA, an action that would further complicate a system in serious need of a permanent, legislative solution," Hatch said in a statement. "Like the President, I've long advocated for tougher enforcement of our existing immigration laws. But we also need a workable, permanent solution for individuals who entered our country unlawfully as children through no fault of their own and who have built their lives here. And that solution must come from Congress."

According to an aide, Hatch called Trump Thursday to talk DACA. Hatch's "focus was explaining to POTUS that rescinding now would make the situation more complicated, and Congress should take the lead on a permanent solution," the aide said, adding: "Those talks are already happening."

Senate Majority Leader Mitch McConnell's office did not have anything immediately on where DACA stands in the Senate.

Colorado Rep. Mike Coffman, a moderate Republican, announced on Thursday he would try to force a vote on one of the bipartisan bills when Congress returns next week through what's known as a discharge petition, which would require a majority of House members to sign on to work. The speaker's office had no comment on that effort.

The bill Coffman is supporting would give DACA-like protections to qualified applicants for three years, but would require renewal by Congress to continue after that.