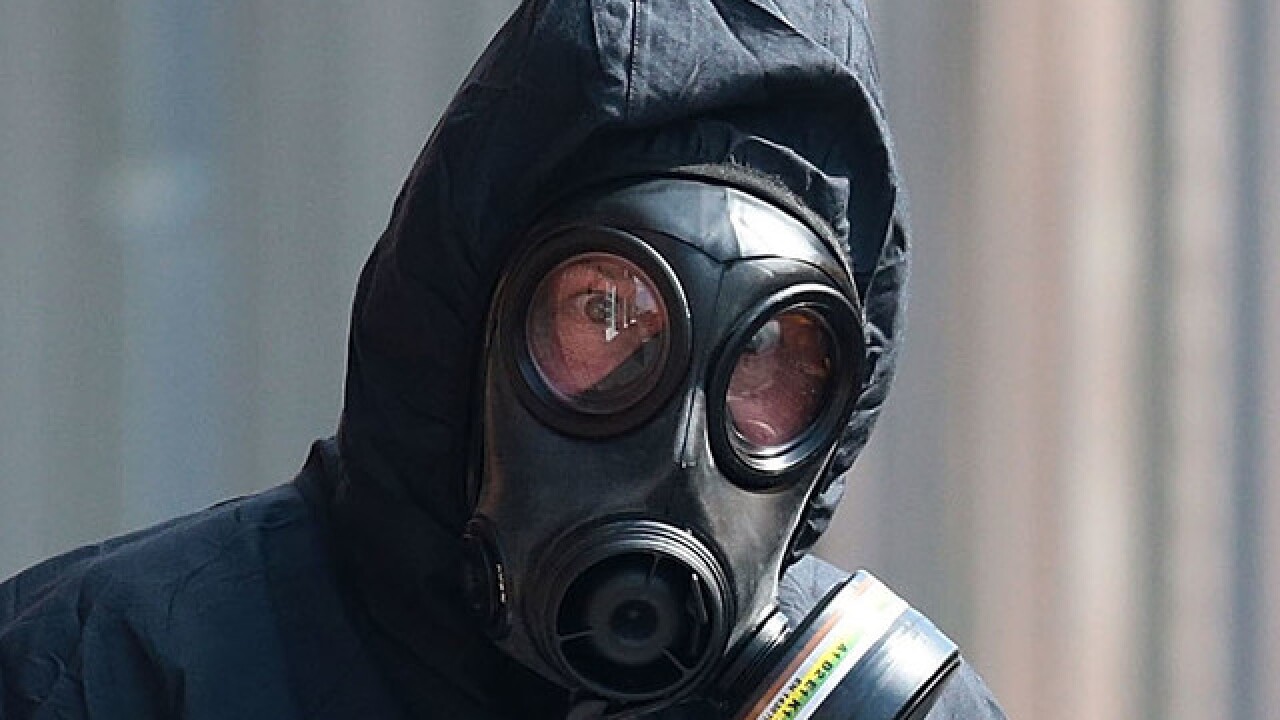 Copyright Getty Images
Jack Taylor
<p>FILE PHOTO: An emergency worker is in a protective suit to avoid being exposed to chemicals.</p>

The Trump administration will impose more sanctions on Russia under a chemical and biological warfare law following the poisoning of a former Russian agent and his daughter in the UK earlier this year, the State Department announced Wednesday.

In a statement Wednesday, State Department spokeswoman Heather Nauert said the US had made this decision on Monday, and accused Russia of violating international law. The statement anticipated the sanctions would go into effect around Aug. 22 in line with the Chemical and Biological Weapons Control and Warfare Elimination Act of 1991.

The State Department notified Congress on Wednesday of the first of two potential tranches of sanctions required under the 1991 law. Unless Russia takes certain steps, a second set of penalties -- more stringent than this first round -- must follow, according to the law.

The first set of sanctions targets certain items the US exports to Russia that could have military uses -- so-called dual use technologies. These are sensitive goods that normally would go through a case-by-case review before they are exported. With these sanctions, the exports will be presumptively denied.

A senior State Department official said there would be carve-outs however.

The US would then require Russia to assure over the next 90 days that it is no longer using chemical or biological weapons and will not do so in the future. Additionally, the criteria in the law call for Russia to allow on-site inspectors to ensure compliance.

The official said that if Russia did not meet the demands, the US "will have to consider whether to impose a second tranche of sanctions as specified by the statute."

The United Kingdom welcomed the move from the US on Wednesday. In a short statement, a government spokesperson said, "The strong international response to the use of a chemical weapon on the streets of Salisbury sends an unequivocal message to Russia that its provocative, reckless behaviour will not go unchallenged."

Not the 'last shoe to drop'

A former Defense Department official, Mark Simakovsky, said a second tranche would target Russian exports to the US and theoretically could include flights by the state airline Aeroflot as well as a downgrade of diplomatic relations. Simakovsky said he was highly skeptical a second round would be applied. That said, he added, "I don't think this is the last shoe to drop" because of political pressure, criticism from Democrats and the looming midterm elections.

Sanctions under this 1991 law have been applied in the past against Syria for its 2013 use of chemical weapons and against North Korea for its use of VX nerve agent in a Malaysian airport during the assassination of Kim Jong Un's half brother.

"It is possible the trade affected could reach hundreds of millions of dollars," the senior official said. He added that "it also depends on what Russian entities apply to export."

Simakovsky said he was "skeptical of the high amount" of that estimate.

Simakovsky said the sanctions were likely driven by the political climate, particularly pressures stemming from President Donald Trump's performance in July at his summit in Helsinki, Finland, with Russian President Vladimir Putin.

"This clearly reinforces that the administration is tightening its sanctions approach to Russia," he said. He noted that "they could have taken this step months ago. They were late in taking this step by several months. The fact that they're doing it now showcases that they're under increased political pressure to target Russia for its malign activities abroad."

Putin has previously denied that Russia was behind the Novichok poisonings, saying in March that it was "unthinkable that we would do such a thing."

Trump said in the wake of the attack that "it certainly looks like" Russia was behind it and then-Secretary of State Rex Tillerson said at the time that the US had "full confidence" in the UK's investigation and conclusion that Russia was probably culpable. Wednesday's announcement reaffirmed the accusation from the US that Russia had used Novichok against its own nationals.

In late March, Trump ordered 60 more Russian diplomats expelled from the US as part of a global response to the attack -- a response that included similar expulsions of diplomats from other nations checking Russia. Moscow responded to the international action by ordering its own expulsion of foreign diplomats.