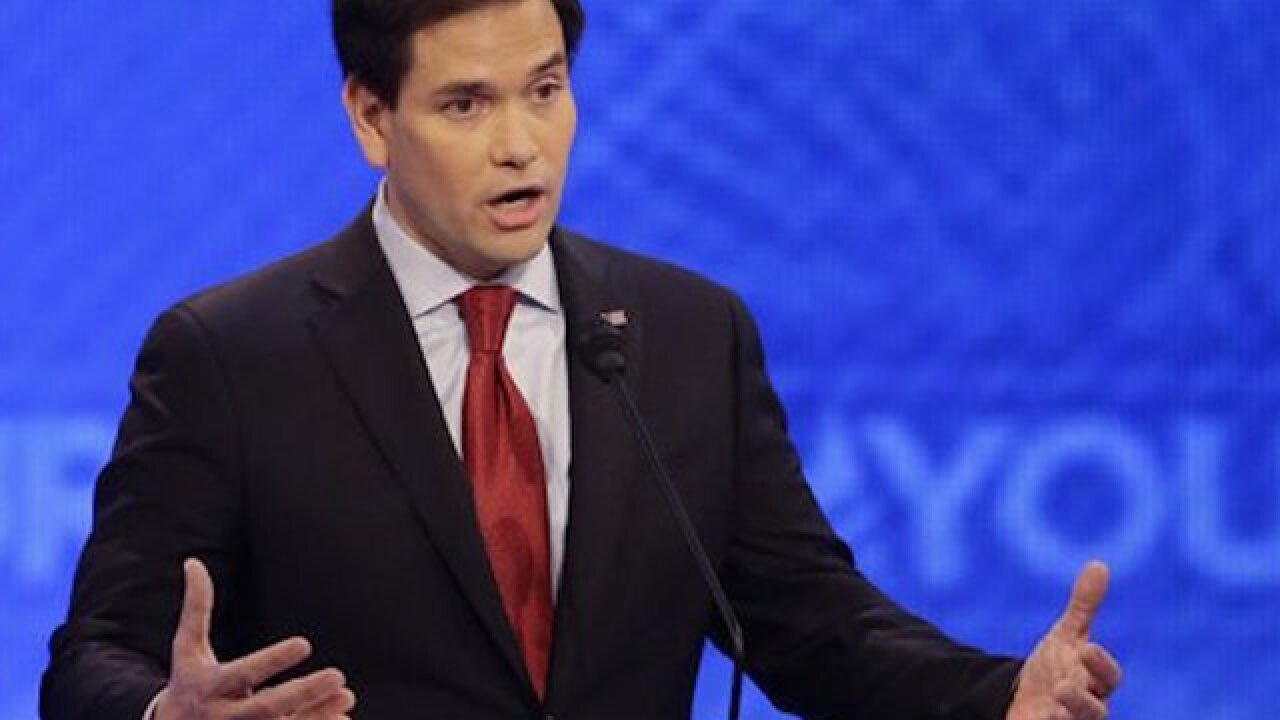 MANCHESTER, N.H. (AP) — Marco Rubio, a first-term senator on the rise in the presidential race, faced a barrage of attacks in Saturday night's Republican debate, with rivals vigorously challenging his readiness to be president and depth of his expertise as they sought to salvage their own White House hopes.

Sen. Ted Cruz, fresh off his victory in the Iowa caucuses, also came under withering criticism for controversial political tactics, with rivals disparaging him for having "Washington ethics" and being willing to test the campaign's legal limits.

The candidates faced off just three days before the New Hampshire primary, a contest that could further winnow an already shrinking GOP field. Hard-fought, expensive and far-ranging, the campaign has become a fight for the future of the Republican Party, though the direction the GOP will ultimately take remains deeply uncertain.

Florida's Rubio has sought to appeal both to mainstream Republicans and those eager to upend the status quo. But his rivals, particularly New Jersey Gov. Chris Christie, have been blistering in their criticism of what they see as his slim qualifications to serve as commander in chief.

"You have not been involved in a consequential decision where you had to be held accountable," Christie said. "You just simply haven't."

Christie, as well as former Florida Gov. Jeb Bush and Ohio Gov. John Kasich, has staked his campaign on New Hampshire, pouring most of his resources into the state in recent weeks. Without a strong showing here, all three will face intense pressure to end their bids.

Gov. Christie has built his closing argument around his criticism of Rubio, and he kept up that approach on the debate stage. He accused the senator of being a candidate governed by talking points — then pounced when the senator played into his hands by repeating multiple times what appeared to be a planned response to criticisms about his qualifications.

"That's what Washington, D.C., does," Christie said. "The drive-by shot at the beginning with incorrect and incomplete information and then the memorized 25-second speech that is exactly what his advisers gave him."

Rubio has sought to deflect criticism of his relative inexperience and the comparisons it draws to President Barack Obama by arguing the problem with the president isn't that he's naive, but that he's pushing an ideology that hurts the country. He made that point repeatedly throughout the debate.

Rubio wavered in defending his decision to walk away from the sweeping immigration bill he originally backed in the Senate — perhaps the legislation he's most closely associated with — and said he wouldn't pursue similar legislation as president.

"We can't get that legislation passed," Rubio said of the bill that would have provided a pathway to citizenship for millions of people in the United States illegally.

Cruz was the victor in Iowa, triumphing over billionaire Trump by drawing heavily on the support of evangelical voters. But he's faced criticism for messages his campaign sent to voters ahead of the caucuses saying rival Ben Carson — another favorite of religious conservatives — was dropping out and urging the retired neurosurgeon's supporters to back him instead.

Cruz apologized for his campaign's actions Saturday, but not before Carson jabbed him for having "Washington ethics."

Those ethics, he said, "say if it's legal, you do what you do to win."

Trump was back on the debate stage after skipping the last contest before the Iowa caucuses. After spending the past several days disputing his second-place finish in Iowa, he sought to refocus on the core messages of his campaign, including blocking Muslims from coming to the U.S. and deporting all people in the country illegally.

The real estate mogul's grip on the Republican field has been shaken by his runner-up finish in Iowa, though he leads in preference polls in New Hampshire.

Kasich, who has staked his White House hopes on New Hampshire, offered a more moderate view on immigration, though one that's unpopular with many GOP primary voters. He said that if elected president, he would introduce legislation that would provide a pathway to legalization, though not citizenship, within his first 100 days in office.

The debate began shortly after North Korea defied international warnings and launched a long-range rocket that the United Nations and others call a cover for a banned test of technology for a missile that could strike the U.S. mainland.

Asked how he would respond to North Korea's provocations, Bush said he would authorize a pre-emptive strike against such rockets if it was necessary to keep America safe. Cruz demurred, saying he wouldn't speculate about how he'd handle the situation without a full briefing. And Trump said he'd rely on China to "quickly and surgically" handle North Korea.

With fewer candidates, debate host ABC News scrapped an undercard debate for low-polling hopefuls. But its rules for the main event left businesswoman Carly Fiorina as the only candidate without a spot on stage.

Fiorina, the only Republican woman running for president, protested her exclusion but there was no last-minute change to allow her on the stage.