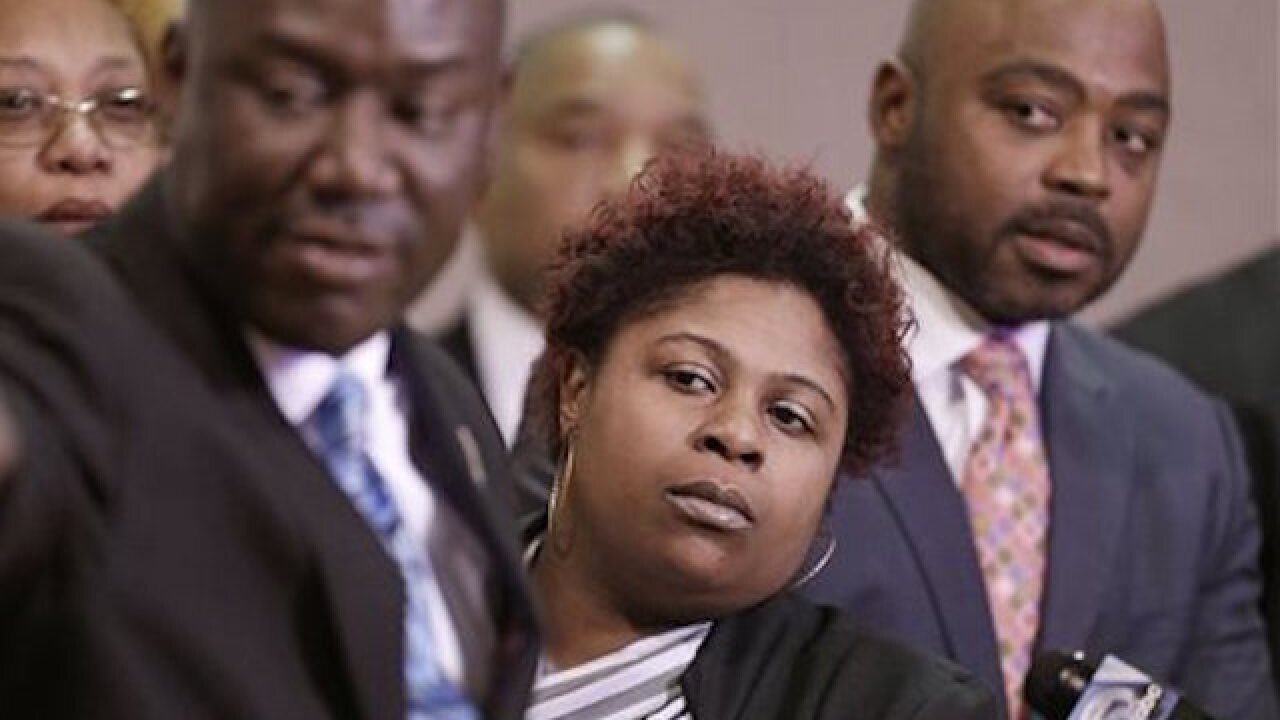 Copyright 2018 Scripps Media, Inc. All rights reserved. This material may not be published, broadcast, rewritten, or redistributed.
Tony Dejak
FILE- In this March 3, 2015, file photo, Samaria Rice, center, the mother of Tamir Rice, a 12-year-old boy fatally shot by a Cleveland police officer, watches the video of Tamir's shooting during a news-conference in Cleveland. Attorney Benjamin Crump, left, and attorneys Walter Madison, right, watch. Attorneys for the family of Tamir Rice have asked a prosecutor to allow their use-of-force experts to testify before the grand jury. (AP Photo/Tony Dejak, File)

CLEVELAND (AP) — The group selected to help Cleveland implement its agreement with the U.S. Justice Department to reform the city's police department issued its first report Thursday, citing progress in developing a new use-of-force police for police and criticizing a civilian group for its inability to investigate complaints against officers and the city for not maintaining the police department's core infrastructure.

The monitoring team is required in the consent decree between Cleveland and the DOJ to submit reports every six months to a federal judge overseeing reform efforts. The report filed Thursday is the first since the judge approved the consent decree's first-year monitoring plan in February.

The consent decree was signed last year after a DOJ investigation found that Cleveland officers had shown a pattern and practice of using excessive force and violating people's civil rights. The consent decree is expected to remain in place for at least five years.

The DOJ investigation cited numerous incidents of excessive uses of force, such as police officers striking people with handguns, using stun guns on people who have been subdued and an incident in November 2012 where two unarmed black suspects were killed in a 137-shot barrage of police gunfire after a high-speed chase.

The report said Cleveland has made "tremendous progress" in creating a new use-of-force policy. Some deadlines will have to be pushed back because of demands on the city and police department in preparing for the Republican National Convention in July, the report said. But, the expectation is that officers will be trained on the new policy by the end of the year and that it will take effect on Jan. 1.

The report said the monitoring team, consisting of a team of attorneys and police professionals, learned early last month that the civilian-run Office of Professional Standards had more than 200 open investigations from both 2014 and from 2015. The report raised further questions about how OPS managed to close more than 120 investigations in several weeks after the monitoring team began making inquiries.

"The foundational deficiencies with OPS are more significant and urgent" than what the monitoring team initially thought, the report said, and has prompted it to form a group to develop "an emergency organizational transformation plan" for the unit.

Cleveland officials have acknowledged the problems with OPS and have committed additional resources to fix them, the report said.

Equipment problems and shortages within the police department are problems that police union officials have complained about for years. The monitoring team's report said the city "will have to make significant progress to fulfill their commitments to equipment and officer resources under the Consent Decree." The expectation is that those commitments will costs the city tens of millions of dollars in the coming years.

The report detailed problems with the department's records management system. In April, the report said, more than 11,000 incident and arrest reports hadn't yet been entered into the system. The hiring of temporary workers reduced the backlog to around 7,500 reports last week.

"Without such reports entered into the system, it is as though these events never happened," the monitoring report said.

Police cars are in "significant levels of disrepair — with personnel at times having serviced on their own time and dime," the report said. "Many elements of CPD's core infrastructure — computers, cars, and the like — are either aging, run-down or deficient."

A spokesman for the city declined comment, saying the city had not received a copy of the report.

The same organization being used by Cleveland is monitoring a similar police consent decree in Seattle.