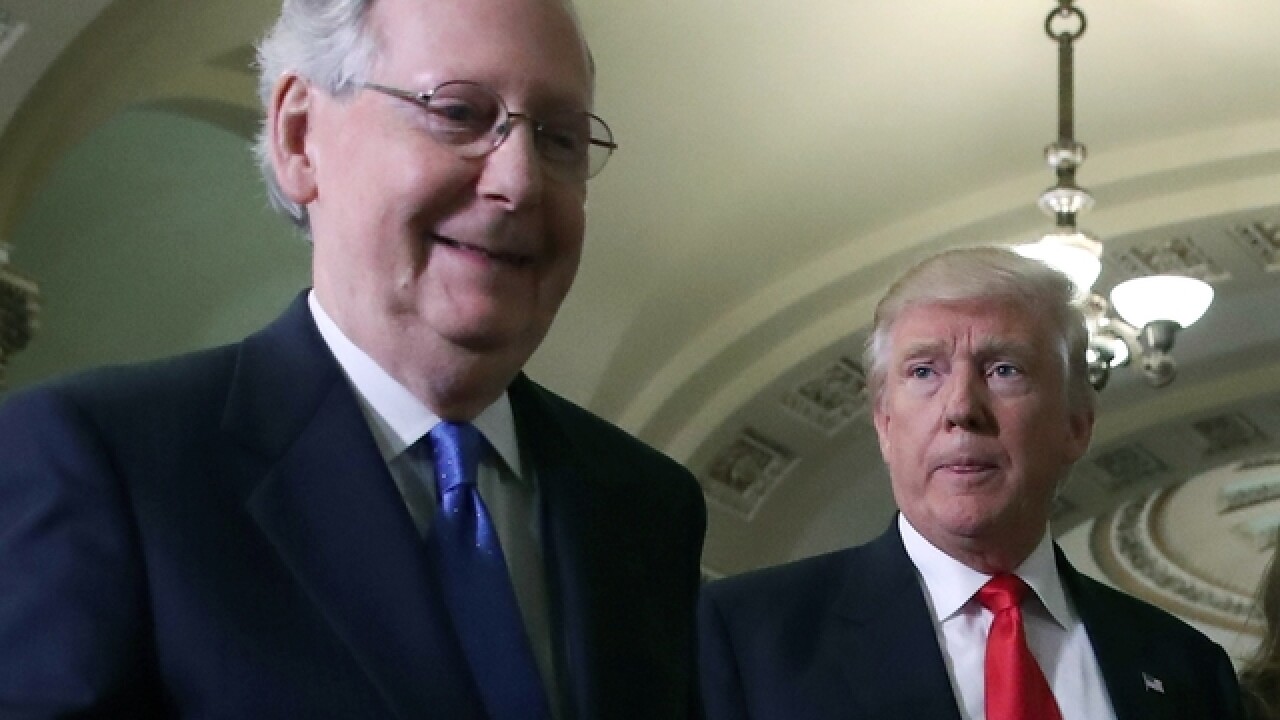 President Donald Trump said Monday he feels "closer than ever before" to Senate Majority Leader Mitch McConnell, a man he's publicly criticized for his handling of the GOP agenda and on whom the President is relying for getting a legislative accomplishment in the first year of his term.

Just before sitting down to lunch with McConnell earlier Monday, Trump sided with the man who has proclaimed war on the Republican establishment -- and the majority leader.

The Trump-McConnell meeting comes as pressure on the Senate intensifies to pass tax cuts and give Trump at least one major legislative victory before the end of the year. The Senate will move this week to pass a budget, the first step in its effort to overhaul the tax code.

On Saturday, Bannon further grilled the GOP establishment and called out McConnell by name.

"It's not my war, this is our war and y'all didn't start it, the establishment started it," Bannon said.

He added, "Right now, it's a season of war against a GOP establishment."

RELATED: Washington is turning against the US Senate

McConnell and Trump's relationship has been fraught ever since the Senate failed to repeal and replace the Affordable Care Act in July. Over the August recess, Trump publicly bemoaned McConnell's leadership.

Trump successfully ran for president by demeaning his enemies and rallying his base to deride his opponents. Those habits have followed him to the White House, and McConnell has regularly been that punching bag.

McConnell has declined to publicly respond directly to the President, instead telling reporters that he isn't a fan of the "daily tweets."

"I've been pretty candid with him and all of you that I'm not a fan of the daily tweets," he said earlier this year.

Trump's own aides, many of whom are tasked with working with Congress to turn Trump's campaign promises into legislation, have privately lamented that the President's attacks against members of his own party -- most importantly McConnell -- have made it more difficult to win over skeptical lawmakers.

Last week, some conservative outside groups, including the Senate Conservatives Fund and FreedomWorks, called on McConnell and other leaders in the Senate to step aside.

RELATED: These are the GOP sticking points on tax reform

Even rank-and-file members say that McConnell's in a tough position if he cannot find a way to convince a majority of Senate Republicans to back a tax cut proposal. McConnell can only lose two Republican senators and still pass a bill.

"If we don't cut taxes and we don't eventually repeal and replace Obamacare, then we're going to lose across the board in the House in 2018. And all of my colleagues running in primaries in 2018 will probably get beat," South Carolina Sen. Lindsey Graham said on CBS' "Face the Nation" over the weekend. "It will be the end of Mitch McConnell as we know it."