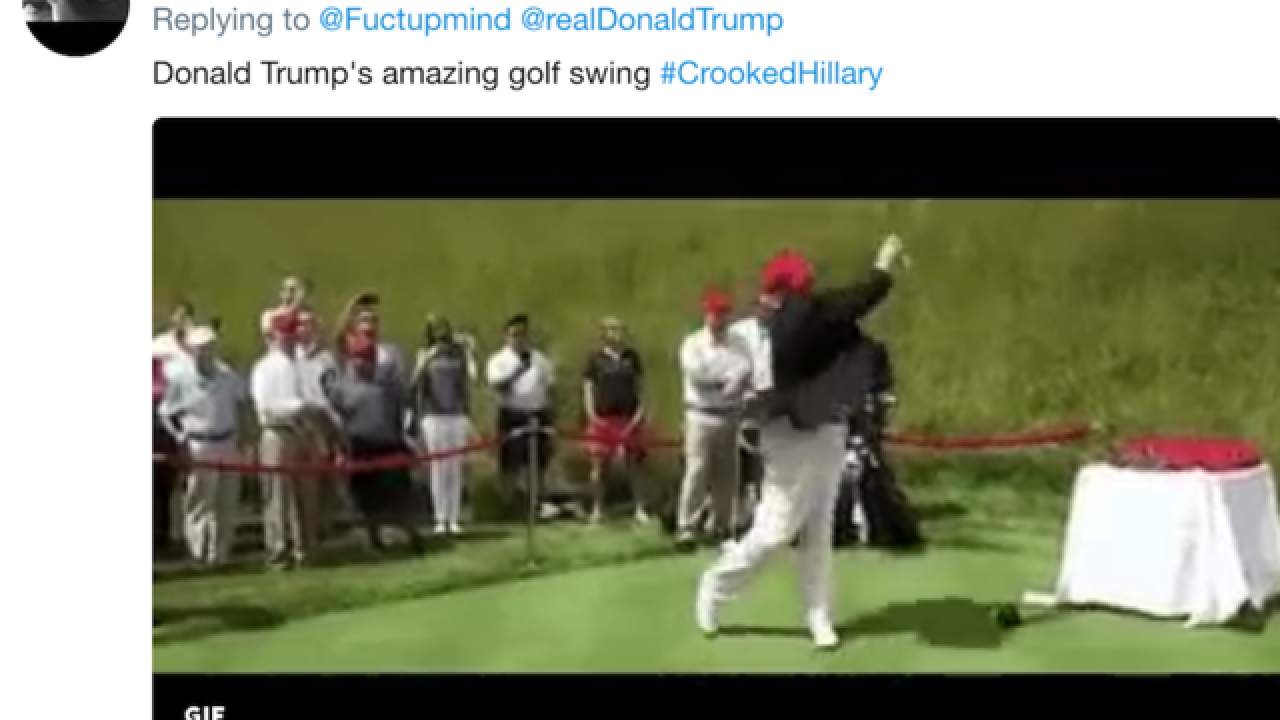 Copyright 2017 Scripps Media, Inc. All rights reserved. This material may not be published, broadcast, rewritten, or redistributed.
<p>President Trump on Sunday retweeted an edited GIF tweeted at him by a supporter that appeared to show him striking Hillary Clinton with a golf ball.</p>

The animated GIF image Trump retweeted spliced together footage of Trump taking a swing on a golf course with footage of Clinton tripping and falling as she boarded a plane in 2011 as secretary of state. The footage is edited to make it appear as though Clinton is hit in the back with a golf ball before her fall.

The tweet revealed a President still reverting to his old social media habits, namely, those likely to earn him quick criticism, less than two months after retired Gen. John Kelly took over as White House chief of staff.

While Kelly has not sought to stop Trump from tweeting, he has encouraged the President to allow him to vet the tweets before posting them -- a request Trump has sometimes acquiesced to.

The White House did not immediately respond to a request for comment Sunday about the President's tweet and whether Kelly was aware of it.

The tweet, which came as Trump prepares to head to New York for a critical round of powerhouse diplomacy with world leaders at the United Nations, followed a week during which Clinton reemerged in the spotlight as she promoted her new book, "What Happened," about the 2016 campaign, reviving her fiercest criticisms of Trump and his supporters and reigniting the debate about her stunning, unanticipated loss.

Trump slammed Clinton over her new book earlier this week too, tweeting that she "blames everybody (and every thing) but herself for her election loss."

Trump's Sunday morning Twitter post was one of more than a half-dozen supporters' tweets the President retweeted Sunday before 8:30 a.m.

Those other tweets included an image predicting Trump would win every state for reelection in 2020, another showing Trump hauling US companies that have outsourced manufacturing abroad and a tweet claiming that "only true Americans can see that president Trump is making America great."

Trump also took to Twitter Sunday morning to tweet about his call late Saturday night with South Korean President Moon Jae-in to discuss the ongoing tensions with North Korea over its nuclear and ballistic missile programs.

Both leaders' offices said Trump and Moon pledged during their call to work with the international community to ramp up pressure on the North Korean regime, which has so far been undeterred in advancing its nuclear and ballistic missile program despite a tightening of international sanctions.

Trump's retweeting spree also came on the heels of a week during which he drew criticism from pockets of his political base as he signaled he was close to a deal with Democrats to protect undocumented immigrants who came to the US as children, known as "Dreamers," from deportation in exchange for border security measures but not funding for the border wall at the center of his campaign.

Trump has promised to rescind protections for those undocumented immigrants and said during the campaign they would have to be deported. Grassroots conservative supporters of the President also fumed that Trump would grant legal status to those undocumented immigrants without securing funding for the border wall, which he continues to promise will be built despite a lack of support in Congress.