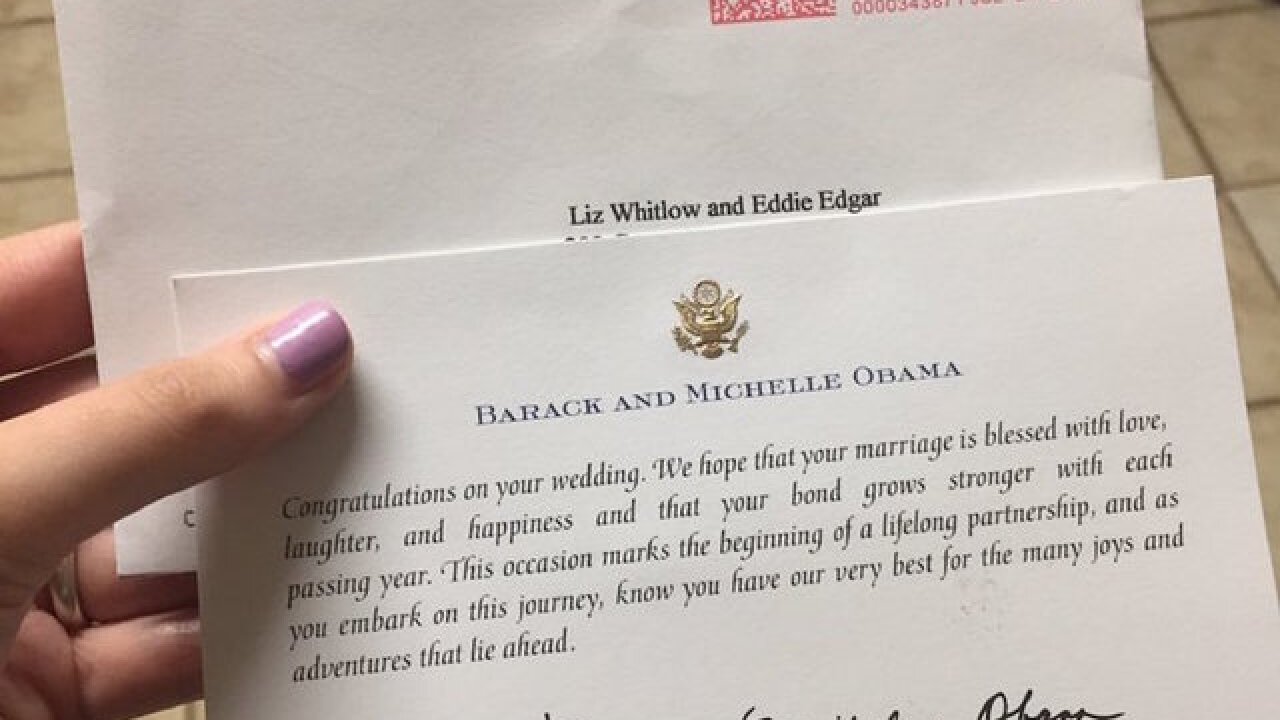 © 2017 Cable News Network, Inc.
Courtesy Brooke Allen
<p>President Barack Obama (well, actually his office) continues to respond to wedding invitations -- even though he's left the White House. Apparently mail forwarding is one government function that has avoided the DC gridlock. Yes, it's only a form letter. But these recipients aren't going to let that dim their excitement.</p>

For many people, their wedding day is the best day of their lives. But for these Americans, the day they received a save-the-date response from Barack Obama may top the list.

The former president (well, actually his office) continues to respond to wedding invitations -- even though he's left the White House. Apparently mail forwarding is one government function that has avoided the DC gridlock.

Yes, it's only a form letter. But these recipients aren't going to let that dim their excitement.

Earlier this week, Brooke Allen tweeted a photo of a response her mother, Liz Whitlow, just received from the Office of Barack and Michelle Obama to say congratulations on her wedding.

Soon, others started sharing photos of similar responses they received. It turns out Obama's office responded to wedding invitations throughout his eight years in office.

Chelsea Roden and her wife, Lisa, sent then-President Obama a handwritten invitation to their wedding in 2016.

"I was really grateful for the work his administration did," Roden told CNN. "When we first started dating in 2011, same-sex marriage wasn't even on the table."

She completely forgot about the invitation she mailed to the White House until she got a response back one month before her wedding.

It read: "Congratulations on your wedding day. May this special time be blessed with love, laughter, and happiness. We wish you all the best as you embark on your journey together, and we hope your bond grows stronger with each passing year."

When Carmen Alvarez-Mendoza got married in 2014, she invited the Obamas as well as Oprah and Ellen DeGeneres. She told CNN she was pleasantly surprised when POTUS and FLOTUS actually responded.

And for all the single ladies out there, it's not just wedding invitations that get an Obama response.

Aubree Spath mailed her high school graduation announcement to the White House and got a lengthy reply.

"It's somewhat magical reading the letter and thinking Obama's proud of you," Spath told CNN. "It really did put the cherry on top of my senior year."

New mom Rachel Newsom sent the Obamas a birth announcement for her daughter, Harlem, in October and got a response welcoming the baby to the world.

Newsom said she wanted to send the announcement before Obama left office. "I was nervous that I might not get a response from the Obama administration," she said. "I wondered if I had waited too late."

It seems that Obama plans to keep up the tradition even though he no longer has the White House letterhead.

Go ahead and send him a birthday card and see if he responds.