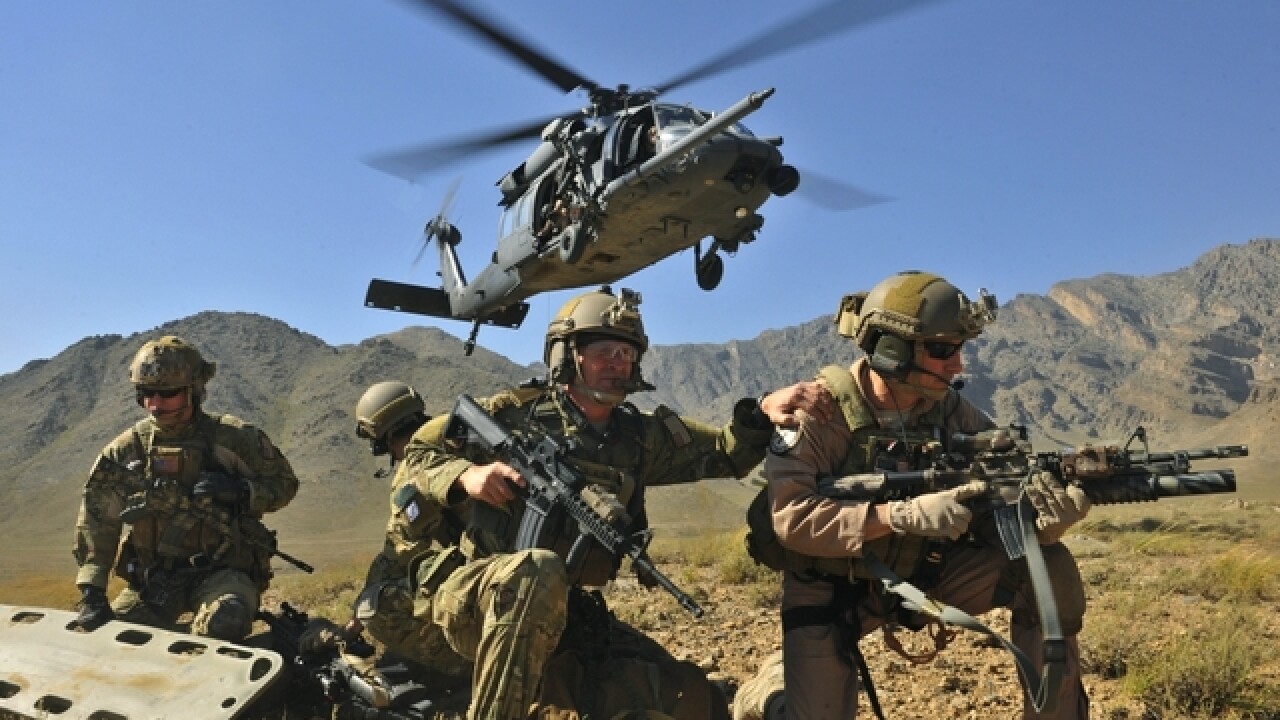 WASHINGTON (AP) — The U.S. will slow the pace of its troop drawdown in Afghanistan, leaving 8,400 troops there when President Barack Obama completes his term, Obama announced Wednesday in a blunt acknowledgment that America will remain entangled there despite his aspirations to end the war.

In a statement at the White House, Obama said the security situation in Afghanistan remains "precarious" and the Taliban a threat roughly 15 years after the U.S. invaded in the aftermath of 9/11. He said he was committed not to allow terrorists to use Afghanistan "as a safe haven for terrorists to attack our nation again."

"It is in our national security interest — especially after all the blood and treasure we've invested in Afghanistan over the years — that we give our Afghan partners the very best opportunity to succeed," Obama said, flanked by top military leaders.

There are currently about 9,800 troops in Afghanistan, and Obama had planned to pull that back to 5,500 by year-end. But a Taliban resurgence and the Afghan military's continuing struggles have led Washington to rethink its exit strategy.

The numbers reflect a compromise between Obama's original plan and what many military commanders had recommended.

The military has argued to keep closer to the 9,800 troops now there to help assist the Afghans and guard against a Taliban resurgence. Last month, a group of more than a dozen former U.S. ambassadors and commanders in Afghanistan urged him to "freeze" the current level of 9,800 for the rest of his presidency and let the next president make adjustments.

Yet Obama, who had hoped to leave office with the U.S. disentangled from Afghanistan, appeared to settle on a number that would show continued progress toward drawing down without jeopardizing the mission.

As the military has prepared for the planned drawdown, it has become clear the U.S. would likely need more than 5,500 troops in Afghanistan to continue to provide security and logistics support for allies

Obama has been under pressure from U.S. allies to make a decision following a NATO announcement last month that the alliance would maintain troops in regional locations around Afghanistan.

The president said boosting the planned troop levels would help other countries prepare their own contribution to the fight. The president planned to discuss troop commitments with U.S. allies when he attends a NATO summit later this week in Warsaw, Poland.

He said his decision should help the next president make good decisions about the future of U.S. involvement in the country where America has been fighting since 2001.

"The decision I'm making today ensures that my successor has a solid foundation for progress in Afghanistan, as well as the flexibility to address the threat of terrorism as it evolves," Obama said.

He added, "l firmly believe the decision I'm announcing is the right thing to do."

The Obama administration declared in December 2014 that the U.S. combat mission in Afghanistan had ended, but for troops serving there, the dangers have not ended. Obama pointed out that 38 Americans had died in just the past 18 months.

The president said the U.S. mission would remain narrowly focused on "training and advising" Afghan forces and supporting counterterrorism operations against the remnants of al-Qaida, the group that attacked the U.S. on Sept. 11.

"We are no longer engaged in a major ground war in Afghanistan," he said.

Obama's announcement will help shape his legacy. A president who came into office promising to end the wars he inherited, has instead found himself wrestling with continued conflicts in both Iraq and Afghanistan and new hostilities in Syria and Libya.