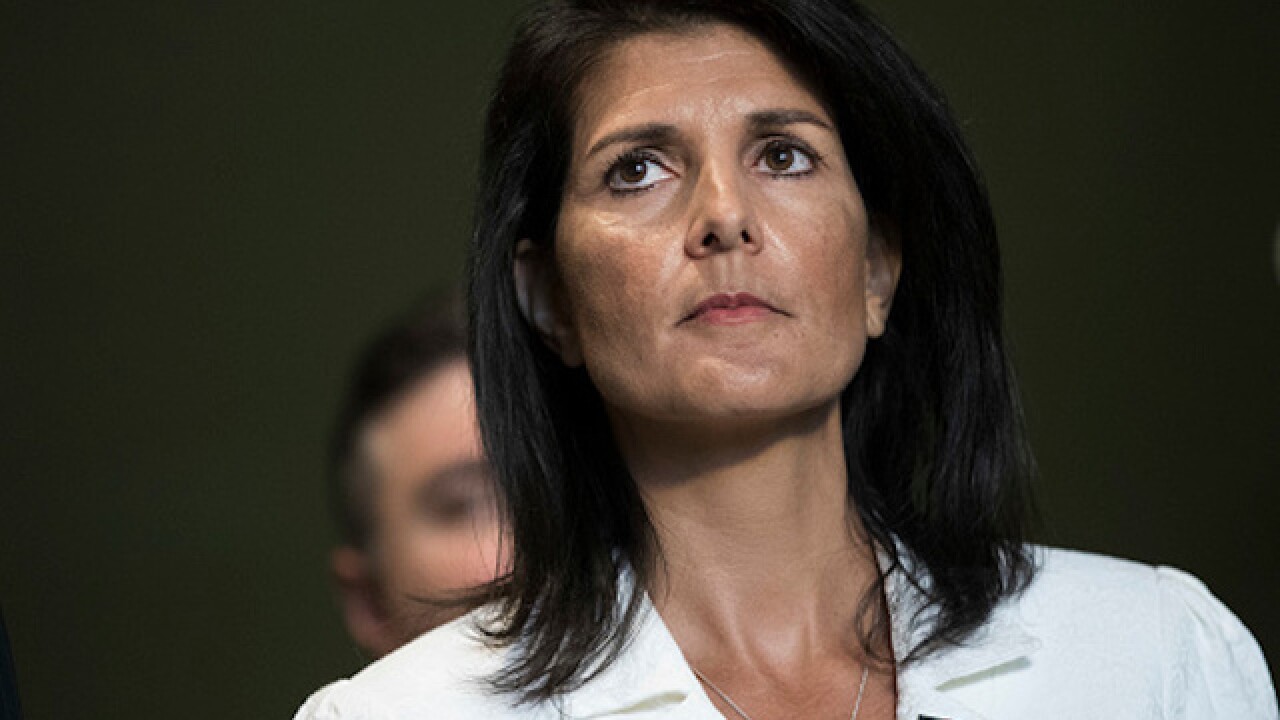 (CNN) -- BREAKING NEWS: US Ambassador to the United Nations Nikki Haley warned Friday that the US "is prepared to do more" in response to Syrian President Bashar al-Assad's regime.

Speaking one day after the US launched strikes against the airbase that was home to warplanes that carried out a chemical attack against civilians earlier this week, Haley also slammed Russia for supporting Assad.

"The United States took a very measured step last night," Haley said in concluding her remarks. "We are prepared to do more. But we hope that will not be necessary. It is time for all civilized nations to stop the horrors that are taking place in Syria and demand a political solution."

ORIGINAL STORY: Russia's envoy to the United Nations slammed the United States' missile attack on a Syrian airbase, calling "it a flagrant violation of international law and an act of aggression" in remarks at a UN Security Council meeting on Friday.

"We strongly condemn the illegitimate action by the US," said Russia's deputy United Nations ambassador, Vladimir Safronkov. "The consequences of this for regional and international stability could be extremely serious"

Safronkov's remarks come a day after the United States launched a military strike on a Syrian airbase in response to a chemical weapons attack that killed dozens of the country's civilians, including children, earlier in the week. The council meeting comes as the US and allies press for a resolution condemning Syrian President Bashar al-Assad regime for the bombing. Russia, which backs Assad's government and has troops in Syria, is likely to veto the resolution.

The strike is the first direct military action taken by the US against the regime of Syrian President Bashar al-Assad in the country's six-year civil war. It represents a substantial escalation of the US military campaign in the region, and could be interpreted by the Syrian government as an act of war.

Six people were killed in the airstrike, according to a televised statement by the Syrian's Armed Forces General Command. Russia condemned the strike as an "act of aggression," and Assad's office Friday called it "a disgraceful act" that "can only be described as short-sighted."

The United Kingdom came out strongly in support of the US action in Syria and slammed Russia in remarks at the UN on Friday.

The UK supports the US airstrikes "because war crimes have consequences and the greatest war criminal of all, Bashar al-Assad, has now been put on notice," United Kingdom Ambassador to United Nations Matthew Rycroft said.

"The US strike was a proportionate response to unspeakable acts that gave rise to overwhelming humanitarian distress, Rycroft said. "It was also a strong effort to save lives, by ensuring such acts never happen again."

Rycroft also blasted Russia for its support of Assad.

"Russia has given Assad everything he could dream of," Rycroft said. "Without Russia's seven vetoes in the Security Council, defying the views of other members of this council, Assad would now have faced sanctions and justice.

"And what did Russia get for its unconditional support? Assad ignores Russia's requests for him to obey a ceasefire. Assad defies Russia's request for him not to gas his own people. Assad thumbs his nose at Russia's calls for Assad to join a peace process.

"Russia sits here today humiliated by its failure to bring to heel a puppet dictator, entirely propped up by Russia itself and Hezbollah and Iran," he said.

But Bolivia's ambassador to the UN, Sacha Sergio Llorenti Soliz, accused the US Friday of being the "prosecutor," "judge" and "jury."

Haley also strongly condemned Russia and the Syrian government Wednesday over the chemical weapons attack and warmed that the US was open to using military action to bring the country's civil war to an end.

"When the United Nations consistently fails in its duty to act collectively, there are times in the life of states that we are compelled to take our own action," Haley said. "For the sake of the victims, I hope the rest of the council is finally willing to do the same."

Haley, who is also the UN Security Council president, added, "How many more children have to die before Russia cares?"