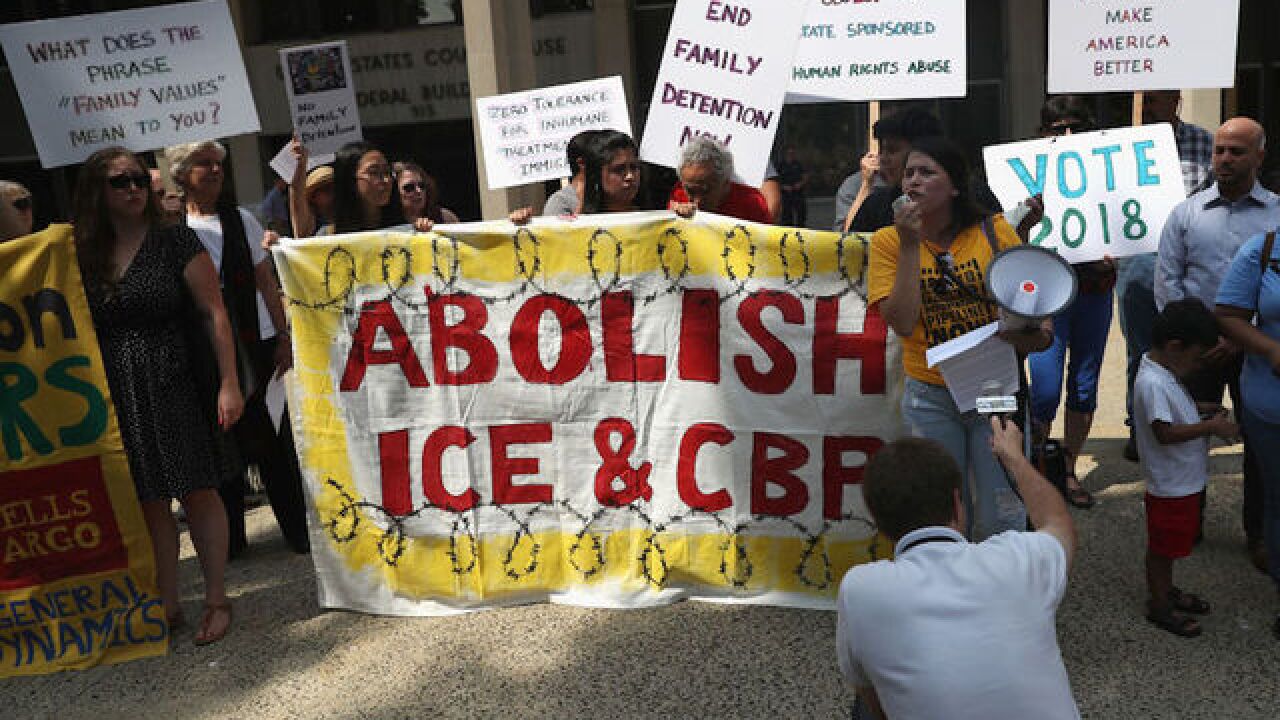 Image copyright 2018 Getty Images. All rights reserved. This material may not be published, broadcast, rewritten, or redistributed.
John Moore
<p>Protesters rally against the separation of immigrant families in front of a U.S. federal court on July 11, 2018 in Bridgeport, Connecticut. </p>

A mother whose toddler died weeks after they were released from a Texas immigrant detention center has filed a wrongful death claim seeking $60 million from the US government.

Yazmin Juarez's 19-month-old daughter, Mariee, died in May, six weeks after they were released from the immigration facility in Dilley.

Juarez and her attorney allege that ICE and those running the facility provided substandard medical care for the toddler after she suffered a respiratory infection while in detention.

"The US government had a duty to provide this little girl with safe, sanitary living conditions and proper medical care but they failed to do that resulting in tragic consequences," attorney R. Stanton Jones said in a statement.

"Mariee entered Dilley a healthy baby girl and 20 days later was discharged a gravely ill child with a life-threatening respiratory infection. Mariee died just months before her 2nd birthday because ICE and others charged with her medical care neglected to provide the most basic standard of care as her condition rapidly deteriorated and her mother Yazmin pleaded for help."

They were detained for three weeks

Immigration officials detained the mother and daughter in March after they came from Guatemala and crossed into the US via the Rio Grande.

They were taken to the government-run South Texas Family Residential Center, where they were held for three weeks. Juarez sought medical treatment for her daughter on March 11 -- six days after they arrived at the Dilley facility, her attorney said.

At the facility, the child became increasingly ill, and Juarez repeatedly sought health care for her daughter, but was prescribed medication that didn't improve her condition, her lawyer said.

As soon as they were released from the facility, Juarez took Mariee to New Jersey, where her mother lives, and sought medical attention the next day. Mariee was hospitalized for respiratory failure for six weeks and died at the Children's Hospital of Philadelphia on May 10, according to Juarez's lawyer.

"After it became clear that Mariee was gravely ill, ICE simply discharged mother and daughter," Jones said. "Yazmin immediately sought medical care for her baby, but it was too late."

Juarez filed the claims against various government agencies, including the Department of Homeland Security, and Immigration and Customs Enforcement.

CNN has reached out to the US Department of Homeland Security, which oversees Customs and Border Protection and Immigration and Customs Enforcement.

"However, lack of comment should not be construed as agreement or stipulation with any of the allegations," CBP said in a statement. "In DHS's homeland security mission, our trained law enforcement professionals adhere to the department's mission, uphold our laws while continuing to provide our nation with safety and security.

A spokeswoman for US Immigration and Customs Enforcement defended the medical care at the facility.

"ICE is committed to ensuring the welfare of all those in the agency's custody, including providing access to necessary and appropriate medical care," Jennifer Elzea said. "... Staffing includes registered nurses and licensed practical nurses, licensed mental health providers, mid-level providers that include a physician's assistant and nurse practitioner, a physician, dental care and access to 24-hour emergency care."

In August, Juarez's lawyer filed a notice of claim against the city of Eloy, Arizona, which was the prime contractor for the federal government in operating the Dilley facility. The claim sought $40 million for wrongful death.