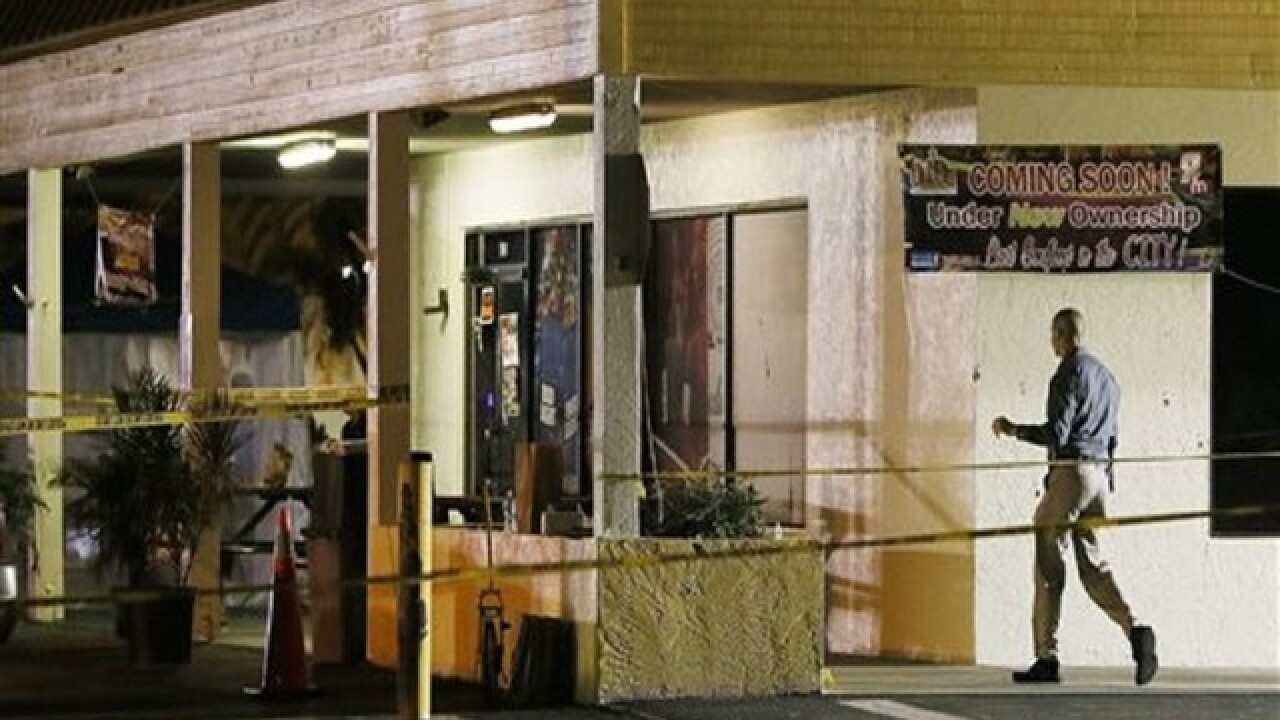 By: Associated Press
Posted at 6:19 PM, Jul 25, 2016
FORT MYERS, Fla. (AP) — With the Orlando massacre still fresh on everyone's mind, the mother of a young man who was slain at a nightclub early Monday had warned her son about what to do if there were a shooting: "hit the floor, find a table."
But when gunfire erupted at the Club Blu parking lot, 18-year-old Stef'an Strawder didn't have anywhere to hide. He was killed along with a 14-year-old boy, and 17 other people ranging in age from 12 to 27 were wounded during a swimsuit-themed party for teens.
"I told him to look for all the exits if any kind of shooting would go off, to hit the floor, find a table and get out of the way ... because I thought about the people in Orlando. That was a big thing," Strawder's mother, Stephanie White, told The Associated Press.
Since the shooting happened in the parking lot, "He didn't have that chance," she said.
Florida is again reeling from a mass shooting at a nightclub, but instead of being committed by a terrorist spouting Islamist ideology, this rampage may have started with an argument over a rap performance. Police have not yet released a motive.
The shooting at a venue tucked in a strip mall also left 14-year-old Sean Archilles dead, and a state and its governor grappling with another tragedy. The massacre at Orlando's Pulse nightclub last month killed 49 and wounded dozens of others.
"The positive is we are at a 45-year low in our crime rate. The negatives - I can't imagine this happening to any person in our state. I don't want this to happen to anybody in my state. The 20 million people who live here, the probably 150 million people who visit here. We just want everybody to be safe," Gov. Rick Scott told reporters at a news conference in Fort Myers.
He said gun laws are not to blame. "The Second Amendment has never shot anybody. The evil did this."
Fort Myers interim Police Chief Dennis Eads said the shooting was not an act of terror. Police detained three people and were searching for others, he added. He declined to give a motive for the shooting or discuss details, saying the investigation is ongoing. Hours after the shooting, police had marked more than two dozen shell casings in the parking lot outside the club.
The shooting happened about 12:30 a.m. Monday, just as the club was closing and parents were picking up their children.
Security guard Brandy Mclaughlin, who was hired for the event, said she saw someone with a semi-automatic rifle open fire, with the attack sounding like "firecrackers." Her car was hit in the spray of bullets.
"The rapper was upset, someone not being able to perform," she said. "It wasn't targeted, terrorist or gays, or anything like that. It wasn't a black or white situation. It was an idiot. An idiot with a firearm."
Club owner Cheryl Filardi, who said she was in the back room when the shots rang out, said at least 10 security guards were hired for the party — two in the parking lot, one or two at the door and the rest floating inside.
She said the club has had four or five teen parties over the past half-dozen years, and this was the second one this summer. She said the parties are something positive for a rough and often-violent neighborhood.
"To be honest with you, every day someone's getting shot in this area. These days in Lee County, somebody's always shooting," Filardi said. "If we do teen parties, we always have a ton of security and we've never had a problem."
State records show this wasn't the first time violence had broken out at Club Blu.
Department of Business and Professional Regulation records show two separate shootings occurred just outside the club on the same night in May 2015. Two men were each shot in the leg but told police they did not want to press charges.
Although beer posters still hung in its windows, Club Blu's alcohol license was revoked June 7 because of issues related to its business records, regulators said.
There were bullet holes in concrete planters and wooden support beams outside the club. Sheriff's evidence markers were still affixed to the holes. The letter "A'' was attached near a post, while nearby "L," ''M," ''N" and "O'' were marked near a planter filled with scraggly foliage.
The youngest to die, Archilles, lived about a mile from the nightclub, and loved to play football and basketball, said his father, Jean Archilles.
"He liked to make people laugh. He's a funny kid. He's always joking," Jean Archilles said.
Strawder starred on the Lehigh High School basketball team, averaging more than 15 points a game as a junior.
His sister also was at the party and was shot in the leg. She's home from the hospital.
"She didn't know she was shot because she was looking for her brother."
All around the home in the Fort Myers suburb of Lehigh Acres were testaments to Strawder's athletic ability. From the baby photo of him with a football on his lap — a ball nearly as big as he was — to the photos of him over the years on the court, to the dozens of trophies lining the cabinets, it was clear that his family adored him and his abilities.
He was the kind of guy who, even if he didn't have much money, he'd pay for meals for teammates, his mother said.
White clutched photos of her son while sitting in a chair in her home. The television was on, loud, and turned to the local news. A story came on about the shootings.
"My son," said White, waving a hand at the television. "There's another picture of him."
Copyright 2016 The Associated Press. All rights reserved. This material may not be published, broadcast, rewritten or redistributed.