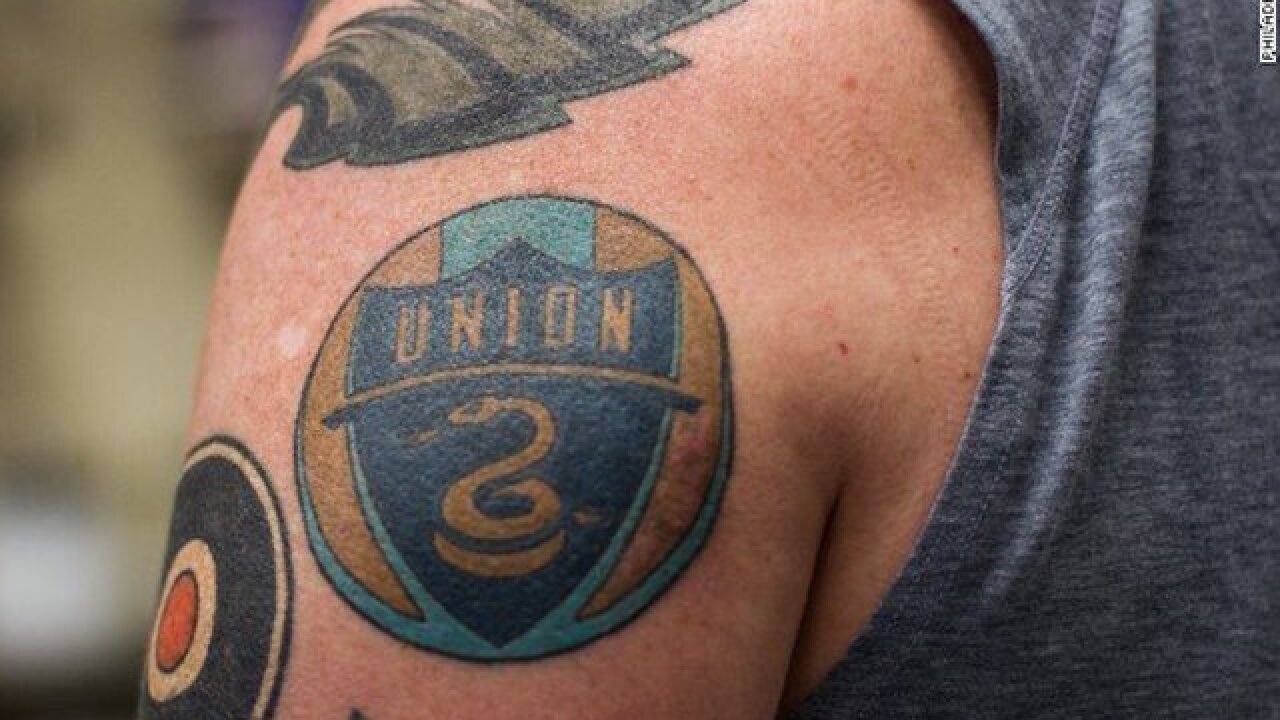 © 2017 Cable News Network, Inc.
Courtesy Philadelphia Union
<p>MLS team Philadelphia Union has hired a Chief Tattoo Officer to ink players. The winner of this unique one-year deal was Jay Cunliffe, owner of Bonedaddys Tattoo, based in the northeast of the city, while fellow finalist Dan Czar has earned a special place on the team sheet to give fans and players a variety of styles to choose from.</p>

Josh Yaro had never visited a tattoo parlor before. Nervous, the footballer needed reassurance, but the memory of his mum who had recently died emboldened him. She was his motivation.

The first pinch of the needle hurt, but the longer the bee-like buzz of the tattoo machine continued the more the Philadelphia Union defender became numb to the pain.

As he looked into the mirror and saw two doves and the words "we only part to meet again'" embossed on his left shoulder, the little discomfort Yaro had felt was worth it.

These days footballers with tattoos are two-a-penny, but what makes Yaro's unusual is that it was done by the Chief Tattoo Officer of Major League Soccer's Philadelphia Union. It is a position that the club describes as a first in professional sport.

Union's ink initiative has also had an unusual spinoff, according to Ghanaian-born defender Yaro: it has helped the squad form closer bonds.

"Most guys have a tattoo for a reason and there's an inspiration behind it so finding out their stories are always cool," the 22-year-old tells CNN Sport.

"It allows us to sit and talk about something other than soccer. Some of the guys who were new to the club this year didn't know my mum had passed away and they found out through my tattoo. It has given the team something else to talk about, other than what we do every day."

Admitting his pain tolerance "isn't great," Yaro has followed in the footsteps of David Beckham, Le Bron James and thousands of other professional athletes in acquiring a permanent piece of body art.

"I came in for training the next day and everyone wanted to see it," he says, smiling, before conceding that he is unsure why tattoos are so popular among his fellow professionals.

"Everyone was really excited. I had a lot of text messages from friends who saw it on Instagram, but the reaction was all positive."

Sports teams attempt to create a spirit of camaraderie in all sorts of ways -- karaoke nights, golf days, lung-busting afternoons on assault courses or an old fashioned night on hard liquor, to name a few -- but this has proven to be a far more innovative way of uniting players, staff and fans.

The idea of having an in-house tattoo artist was the brainchild of Doug Vosik, Union's vice president of marketing, after he bonded with new Dutch signing Giliano Wijnaldum -- brother of Liverpool midfielder Georginio Wijnaldum -- over their love of ink during a pre-season photo shoot.

"While introducing myself to Giliano, I immediately pointed out a few of his tattoos that I liked," Vosik tells CNN Sport.

"Catching him a bit off guard as a fan of tattoos, he was surprised when I rolled up my sleeve to show him all of my tattoos.

"During this conversation, coach Jim Curtin walked by and shared that he absolutely loves tattoos and one day hoped to have a couple. Realizing how quickly strangers could bond over tattoos led the idea of having an artist provide professional services to the team."

After months of whittling their way through 150 candidates, the club created a five-person shortlist before consulting with players and staff on who should become the team's official tattooist.

The winner of this unique one-year deal was Jay Cunliffe, owner of Bonedaddys Tattoo, based in the northeast of the city, while fellow finalist Dan Czar has earned a special place on the team sheet to give fans and players a variety of styles to choose from.

Cunliffe and Czar, who is based in Atlantic City, will collaborate to create Union-themed tattoos and host fan events -- on October 21 the club allowed season ticket holders to trade in their reward points for free or discounted tattoos -- while there are also plans afoot to design a mural.

'I can get more tattoos now'

Midfielder Marcus Epps' long-held ambition is to have a sleeve -- a series of tattoos covering the length of the arm -- and he is already making plans for his next visit to Bonedaddys.

"The Union already checked the tattoo artists out so I feel comfortable with them and feel I can get more tattoos now," the 22-year-old Mississippi native tells CNN Sport.

"Everyone was happy about the appointment, even the guys who didn't have tattoos. We think it's pretty cool.

"It's kind of addictive. In my free time I look up ideas for tattoos. I have two pieces in mind. One with my club emblem from childhood and in another one I want to incorporate the Union in it."

Being an individual in a team

Half a century ago tattoos were the reserve of sailors and bikers, but the sight of athletes covered in ink is, these days, a familiar one no matter what the sport. What was once frowned upon is now fashion.

Arguably, former Manchester United, Real Madrid and England midfielder Beckham, whose body is decorated with over 40 tattoos, was the first footballer to set the trend when he had the name of his first child, Brooklyn, inked across his neck.

Among the designs on Beckham are two cherubs, representing his first two sons, the year of his birth 1975, roses which mark his 10th wedding anniversary and 'VII' in reference to the No.7 shirt he wore at Manchester United.

Czar, who has also tattooed NFL players, has noticed a steady increase in the popularity of tattoos ever since he first became an artist three years ago.

"Anybody from 18 through to 35, there's a half chance they're going to have a tattoo, which is really good for me," he tells CNN Sport.

"With athletes, each player is representing something. It's cool for them to be an individual on the team by having a tattoo, to stand a bit apart, to express themselves in a way they find appropriate. It's really become fashion now."

For both Czar and Cunliffe, high on the list of sportspeople they would like to ink is Beckham.

Cunliffe, who has been a tattoo artist for 14 years and opened his shop in 2005, told CNN Sport: "Beckham definitely stands out. He's had a huge influence.

"Athletes and tattoos go hand in hand, just like you used to see rock and roll stars with tattoos.

"I love tattooing. Whatever it is I get excited for it and just being able to tattoo professional athletes is exiting in itself."