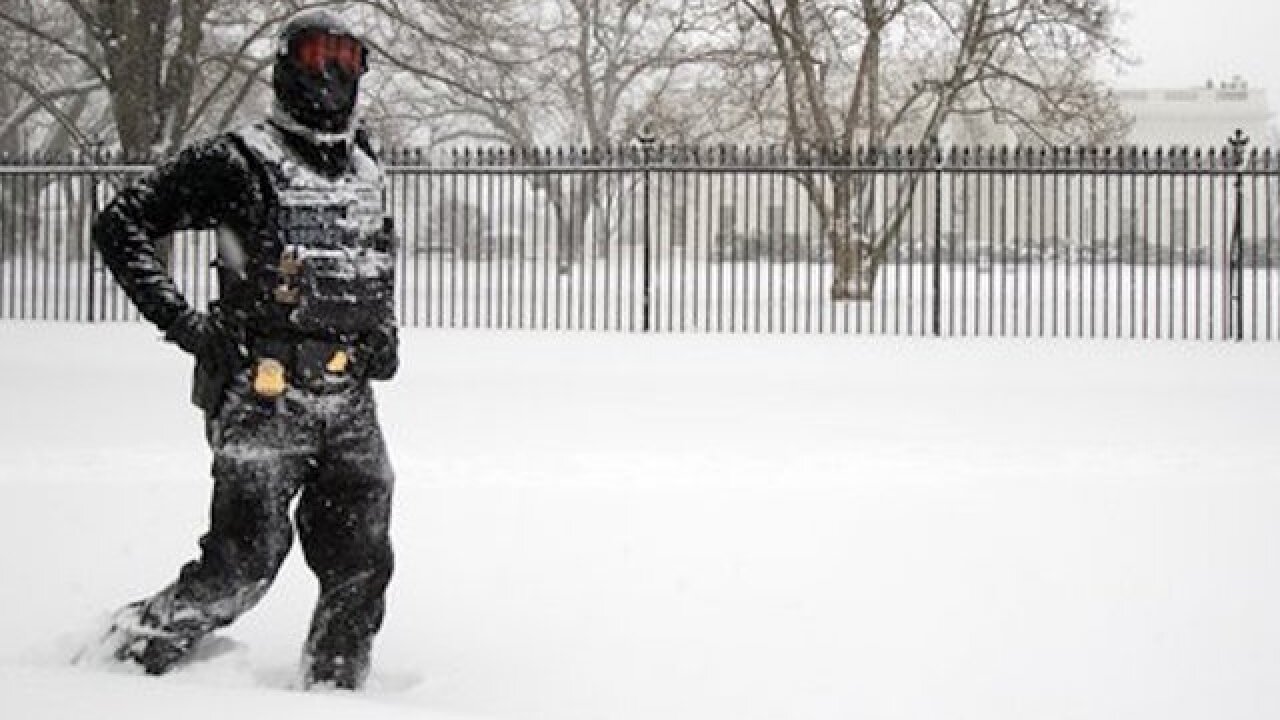 WASHINGTON (AP) — Millions of people awoke Saturday to heavy snow outside their doorsteps, strong winds that threatened to increase through the weekend, and largely empty roads as residents from the South to the Northeast heeded warnings to hunker down inside while a mammoth storm barreled across a large swath of the country.

The worst of the blizzard was yet to come, with strong winds and heavy snow expected to produce "life-threatening blizzard conditions" throughout Saturday, according to the National Weather Service's website. Forecasters also predicted up to a half-inch of ice accumulation in the Carolinas, and potentially serious coastal flooding in the mid-Atlantic.

Check out our Blizzard 2016 photo gallery

Snow had started falling Friday, and Kentucky felt quite a brunt from that, with 18 inches in some areas. Drivers who opted to take to the roads were stranded on a long stretch of Interstate 75 south of Lexington because of a string of crashes and blowing snow, state police and witnesses said.

The road was closed overnight, but reopened early Saturday morning, with traffic moving slowly, said Buddy Rogers, spokesman for Kentucky Emergency Management. It was unclear how many were stuck. Crews had been making wellness checks; passing out snacks, fuel and water; and trying to move cars one by one. Some had been stranded since Friday afternoon, and emergency shelters had opened.

In the Washington, D.C., metro area, nearly two feet of snow was measured on the ground Saturday morning. In Silver Spring, Maryland, about 20 inches of snow was outside by daybreak. Lightning flashed, and thundersnow rumbled.

Plows cleared a heavily traveled road; ambulances and trucks were able to get through, but few other vehicles were moving. A couple intrepid people walked along the cleared portion of the road, ducking into the deeper snow when vehicles approached.

According to the National Weather Service's website early Saturday, 18 inches of snow already had fallen on Ulysses in eastern Kentucky, while 16 inches fell in Beattyville. Between 14 inches to 15.5 inches had fallen in at other locations across Kentucky, including Frenchburg, Mount Vernon, Eglon and Lancer.

In New Jersey, 40,000 people were without power early Saturday, most of them along the coast.

Even before the snow began to fall Friday afternoon, states of emergency were declared, lawmakers went home, and schools, government offices and transit systems closed early from as far south as Georgia to as far north as New York City.

The ice and snow made travel treacherous, with thousands of accidents and at least nine deaths reported along the region's roadways. By late Friday, Virginia State Police had reported 989 car crashes statewide since the storm began, and had assisted nearly 800 disabled vehicles, said Ken Schrad, spokesman for the Virginia State Police Joint Information Center.

In Kentucky, on the closed section of I-75, photos from local media outlets showed a long line of trucks and other vehicles lined up along the snowy road. Among them was local TV reporter Caitlin Centner, who told her station, WKYT-TV (http://bit.ly/1PpjtXs), in a segment aired from her news van that it was a crazy experience, with wind and snow building as drivers turn off cars to save gas.

"Every time it looks like there's light at the end of the tunnel, more accidents and slide-offs are occurring," she said.

Centner interviewed Rebekah Sams, who was stranded making her way to a volleyball tournament. Sams described snow blowing amid a complete standstill and said, "You never imagine yourself being out here for five hours during a snowstorm."

In Washington, the federal government closed its offices at noon Friday, and all mass transit was shutting down through Sunday. President Barack Obama, hunkering down at the White House, was one of many who stayed home.

About 7,600 flights were canceled Friday and Saturday — about 15 percent of the airlines' schedules, according to the flight tracking service FlightAware. They hope to be fully back in business by Sunday afternoon.

One of the unlucky travelers stranded by the storm was Jennifer Bremer of Raleigh, North Carolina. Bremer flew into Chicago on Thursday morning, carrying only a briefcase, for what she thought would be less than a day of meetings. Her flight home was canceled Thursday night, and then again Friday.

"I have my computer, my phone and a really good book, but no clothing," Bremer said as she eyed flight boards at O'Hare International Airport on Friday. "I have a travel agent right now trying to get creative. I'm waiting on a phone call from her. ... I'm trying to get somewhere near the East Coast where I can drive in tonight or early tomorrow morning."

Not so unhappy to be stranded were passengers on a cruise ship that was supposed to return to the port of Baltimore from the Bahamas on Sunday. The arrival has now been delayed until at least Monday because of the storm.

"I was not totally surprised and, frankly, happy to be delayed," Meg Ryan, one of the passengers aboard the Royal Caribbean International's Grandeur of the Seas, wrote in an email to The Associated Press.

"First, it is an extra day of vacation, but more importantly, safety comes first and travel Sunday would be difficult, if not impossible."

Forecasters said as much as 2 feet or more of snowfall was forecast for Baltimore and Washington, and nearly as much for Philadelphia.

By Friday night, parts of Kentucky, the Virginias and North Carolina had already received well over a foot of snow, while more than a half a foot had fallen in some areas of Pennsylvania, South Carolina and Tennessee.

The snowstorm was greeted happily at Virginia's ski resorts.

"We're thrilled," said Hank Thiess, general manager at Wintergreen ski resort in central Virginia. "Going forward, we're set up to have just a terrific second half of the ski season."

"We're going to have a packed snow surface that will just be outstanding," he said.