Here’s something that German Chancellor Angela Merkel and President Donald Trump probably won’t discuss when they meet up at this week’s Group of 20 summit in Hamburg, Germany.

A new Pew Research Center poll found that residents in most G20 countries have more confidence in Merkel to handle world affairs than they have in Trump. That includes the United States where more people trust Merkel on the world stage than Trump, 56 percent to 46 percent, according to the survey.

Leaders of the G20 are gathering Friday and Saturday to discuss global economic growth, climate change, trade and numerous other financial issues, but a crucial international issue  — what to do about North Korea — also is certain to occupy some time. In fact, Trump might very well be the leader who puts the topic on the table.

The world-wide Pew poll tapped into the attitudes of people in 37 nations, including 17 of the members of the G20. In only three of the G20 countries, South Africa, India and Russia, did respondents not have more confidence in Merkel than Trump regarding world affairs.

The survey, which was conducted in February and March, did not include two G20 countries, China and Saudi Arabia. The 20th member of the G20 is a representative from the European Union.

The Merkel vs. Trump results was only one of many findings in the survey. Trade and climate change also were included.

Here is a key finding regarding trade: 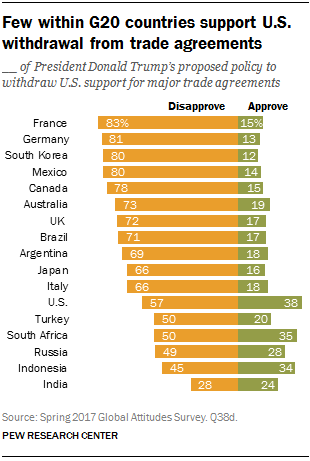 And here are the results for climate agreements: 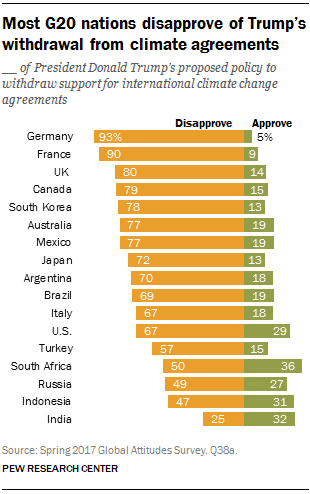 The Pew Research Center survey included 40,448 respondents in 37 countries from Feb. 16 to May 8, 2017. Details about the survey methodology and the marge of error for each country can be found here.