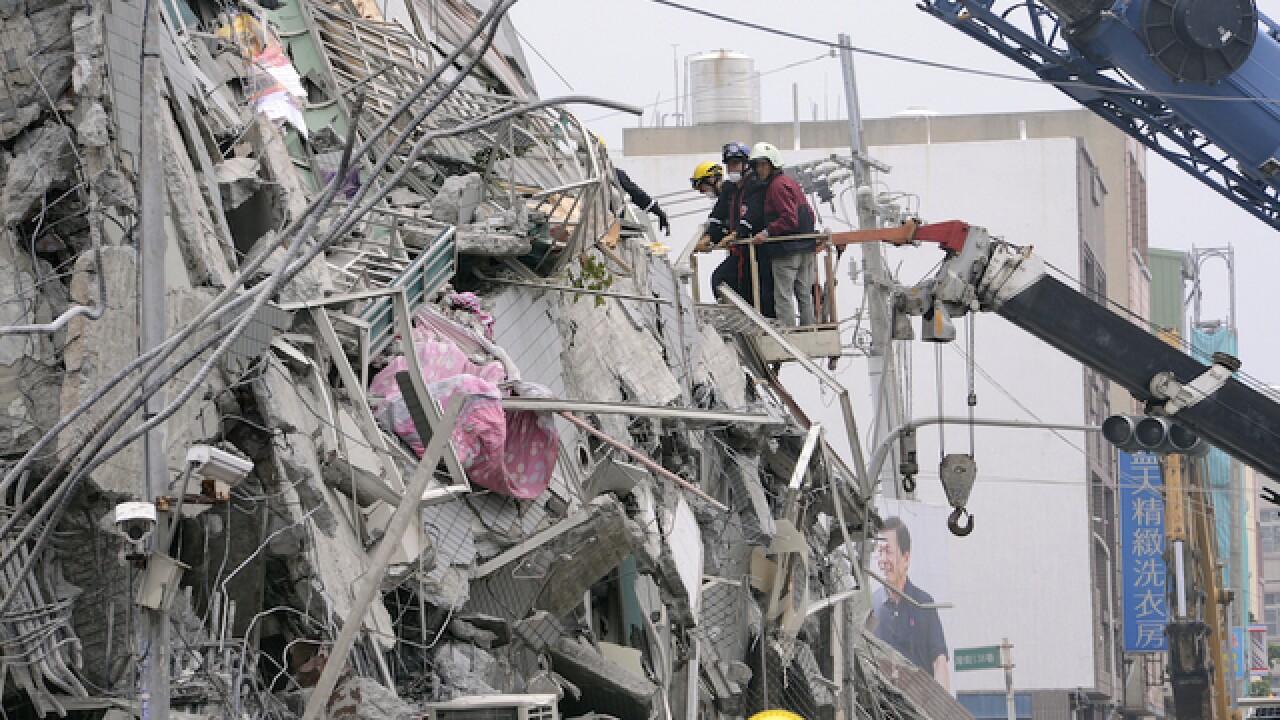 Rescuers were searching late Saturday for more than 100 people still missing after a powerful, shallow earthquake struck southern Taiwan before dawn, causing a high-rise residential building to collapse and killing at least 14 people and injuring hundreds.

More than 340 people were rescued from the rubble in Tainan, the city hit worst by the quake. About 2,000 firefighters and soldiers scrambled with ladders, cranes and other equipment to the ruins of the 17-floor residential building, which folded like an accordion onto its side after the quake struck.

The spectacular fall of the building immediately raised questions about its construction, and Taiwan's interior minister said there would be an investigation.

The official CNA news agency reported that the quake killed 14 people and injured 484 others, according to statistics by Taiwan's rescue authorities. Most of the injured had been released from hospitals by Saturday night.

CNA said 153 people remained missing and that rescuers were racing to find them. Taiwan's SETV reported that 101 adults and 41 children were missing. The number of missing was expected to drop because some of those listed might have been listed twice, hospitalized or not in the building at the time of the quake.

President Ma Ying-jeou visted a hospital and the emergency response center in Tainan before rushing back to the capital, Taipei, to attend a briefing on the situation.

Rescuer Jian Zhengshun said the rescue work was difficult because part of the high-rise building was believed to be buried underground, with the quake loosening the earth. He said rescuers had to clear rubble for passages to reach people who were trapped.

The quake came two days before the start of Lunar New Year celebrations that mark the most important family holiday in the Chinese calendar. The collapsed building had 256 registered residents, but far more people could have been inside when it fell because the population might have swelled ahead of the holiday, when families typically host guests.

Local media said the building included a care center for newborns and mothers, and a newborn was among those confirmed dead in the disaster.

Most people were asleep when the magnitude-6.4 earthquake hit at about 4 a.m., 22 miles (35 kilometers) southeast of Yujing. It struck only 6 miles (10 kilometers) underground, according to the U.S. Geological Survey. Shallow earthquakes generally cause more damage than deeper ones.

Tainan resident Lin Bao-gui, a secondhand car salesman whose cars were smashed when the building collapsed across the street from him, said his house first started "shaking horizontally, then up and down, then a big shake right to left."

"I stayed in my bed but jumped up when I heard a big bang, which was the sound of the building falling," he said.

Authorities in Tainan said that of the 14 people killed in the quake, 11 were found at the ruins of the fallen building.

Rescuers found the bodies of a 10-day-old infant, three other children and six adults at the collapsed building, Taiwan's emergency management information center said. One other death was reported at the site, but details were not immediately available.

Authorities said two people were killed by falling objects elsewhere in Tainan. No details were available on the 14th death, reported Saturday night.

Rescuers pulled out at least 247 survivors from the collapsed building, the emergency management information center said. Throughout Tainan, 334 people were rescued, the city government said.

The Taiwanese news website ET Today reported that a mother and daughter were among the survivors from the building, and that the girl drank her urine while waiting to be rescued, which happened sooner than expected.

Rescuers went apartment to apartment, drawing red circles near windows of apartments they already had searched.

"I went to the top floors of the middle part of the building, where we found five people, one of whom was in bed and already dead," said Liu Wen-bin, a rescuer from Taichung. "Some people were found in the shower, some in the bedroom."

Elsewhere in Tainan, dozens of other people were rescued or safely evacuated from damaged structures or buildings declared unsafe following the quake, including a market and a seven-floor building, authorities said. A bank building also careened, but no one was injured or trapped.

As dawn broke, Taiwanese TV showed survivors being brought gingerly from the high-rise, including an elderly woman in a neck brace and others wrapped in blankets. The trappings of daily life — a partially crushed air conditioner, pieces of a metal balcony, windows — lay twisted in rubble.

People with their arms around firefighters were being helped from the building, and cranes were being used to search darkened parts of the structure for survivors.

The emergency management information center said 1,236 rescuers from outside Tainan were deployed, including 840 from the army, along with six helicopters and 23 rescue dogs.

The quake disrupted bullet train service during the busy Lunar New Year holiday period on the main north-south route from Taipei to Tainan. By late Saturday, some tracks had been repaired and trains were able to travel as far south as Chiayi, with shuttle buses available to those traveling on to Tainan.

The quake was felt as a lengthy, rolling shake in the capital, Taipei, on the other side of the island. But Taipei was quiet, with no sense of emergency or obvious damage just before dawn.

On Saturday night, Madonna performed before thousands of fans at Taipei Arena, offering her condolences to those affected by the quake, CNA reported.

Residents in mainland China also reported that the tremor was felt there. The Beijing government offered to help as needed.

Because of the collapse of the residential high-rise, questions surfaced about whether the 1989 structure had shoddy construction. Tainan's government said the building was not listed as a dangerous structure before the quake, and Taiwan's interior minister, Chen Wei-zen, said an investigation would examine whether the developer had cut corners during construction.

Earthquakes frequently rattle Taiwan, but most are minor and cause little or no damage. However, a magnitude-7.6 quake in central Taiwan in 1999 killed more than 2,300 people.