'Lost my way': Murray pushed to 5 sets again at 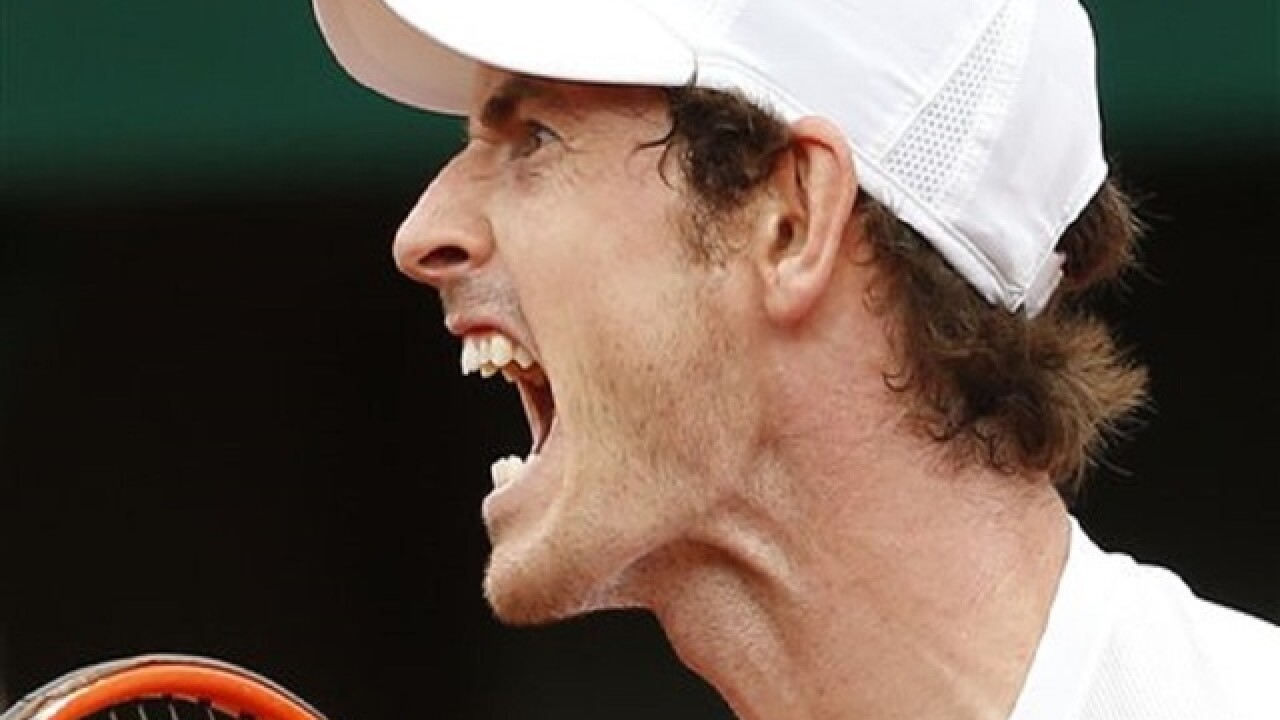 Alastair Grant
<p>Britain's Andy Murray screams after scoring a point in his second round match of the French Open tennis tournament against France�s Mathias Bourgue at the Roland Garros stadium in Paris, France, Wednesday, May 25, 2016. (AP Photo/Alastair Grant)</p>

PARIS (AP) — As if ordering room service, Andy Murray's latest unheralded French Open tormenter requested that a can of Coke and a Mars bar be brought to him right there on Court Philippe Chatrier for sustenance during their five-setter.
Truth is, it was Murray who appeared in need of a jolt of some sort, especially while he was losing 16 points in a row during one stretch.
"I lost my way on the court today," Murray said, "for quite a while."
For now, Murray is still in the mix at Roland Garros, reaching the third round by coming from behind yet again to win 6-2, 2-6, 4-6, 6-2, 6-3 on Wednesday against French wild-card entry Mathias Bourgue, who was playing in the second tour-level match of his life. The second-seeded Murray acknowledged he can't keep getting pushed to the limit if he has designs on adding a third Grand Slam title to his collection.
"I need to go and rest," said Murray, already on court for 10 sets and more than 7 hours. "It's been a tough, tough few days."
Sure has.
Murray, three times a semifinalist in Paris, never had won consecutive five-set matches in any tournament. But he twice overcame a set deficit before edging 37-year-old qualifier Radek Stepanek 3-6, 3-6, 6-0, 6-3, 7-5 in a first-round match suspended by darkness Monday and completed Tuesday.
Then, against Bourgue — a 22-year-old buoyed by a partisan crowd that repeatedly regaled their man with standing ovations and jeered line calls that didn't go his way — Murray dropped eight straight games, including that 16-point drought, and fell behind by two sets to one.
"I couldn't believe it myself," Bourgue said. "I was very happy. I was very proud. I knew I was on top of things at that point."
Not surprisingly, it didn't last.
This is, after all, someone who is ranked 164th. Someone who usually plays on the lower-tier Challenger tour and never before faced anyone ranked better than 55th. Someone who never before contested a fourth set and so leaned on advice from another French pro, Gilles Simon: If exhaustion sets in, ask for a soda and a candy bar (a ball boy eventually did bring Bourgue a drink and a Twix on Wednesday).
To scout him, Murray asked some French players what they knew about Bourgue — he's good on clay, they warned — and watched video of his match from Monday. Not much else to go on.
Murray is more familiar with his next opponent: No. 27 Ivo Karlovic, who hit 41 aces to beat Australian wild-card entry Jordan Thompson 6-7 (2), 6-3, 7-6 (3), 6-7 (4), 12-10 and become, at 37, the oldest man to reach a major's third round since Jimmy Connors at the 1991 U.S. Open.
"It's the only time when being old is OK," Karlovic joked.
Murray is 6-0 against the 6-foot-11 (2.11-meter) Karlovic.
"Physically, the average rally length will only be a few shots — maybe three, four shots max. So that's a positive there," Murray said. "At least I get a day's rest now. But you can't continue playing matches like that and then expect to win the tournament."
Not since Gaston Gaudio in 2004 has a man been taken to five sets in each of the French Open's first two rounds and gone on to lift the trophy.
Most of the other top seeds in action Wednesday won in straight sets, including defending champion Stan Wawrinka, No. 5 Kei Nishikori, No. 8 Milos Raonic and the last two American men, No. 15 John Isner and No. 23 Jack Sock. Among the women, No. 2 Agnieszka Radwanska, No. 4 Garbine Muguruza, No. 10 Petra Kvitova, No. 11 Lucie Safarova and No. 19 Sloane Stephens advanced in two sets.
For a segment of his 3½-hour match against Murray, Bourgue could do no wrong, whether with big swings from the baseline or perfect drop shots. He ended up with more winners, fewer unforced errors and more total points, 138-137.
"It's a pity I lost," Bourgue said.
Bourgue's level eventually dropped, but Murray deserves credit for limiting his own mistakes down the stretch. Murray made a combined 10 unforced errors over the last two sets, after having at least that many in each of the first three.
When it was over, Murray looked at his guest box and pointed at his heart.
"Maybe not feeling or playing my best," Murray said, "but found a way to win."
Copyright 2016 The Associated Press. All rights reserved. This material may not be published, broadcast, rewritten or redistributed.