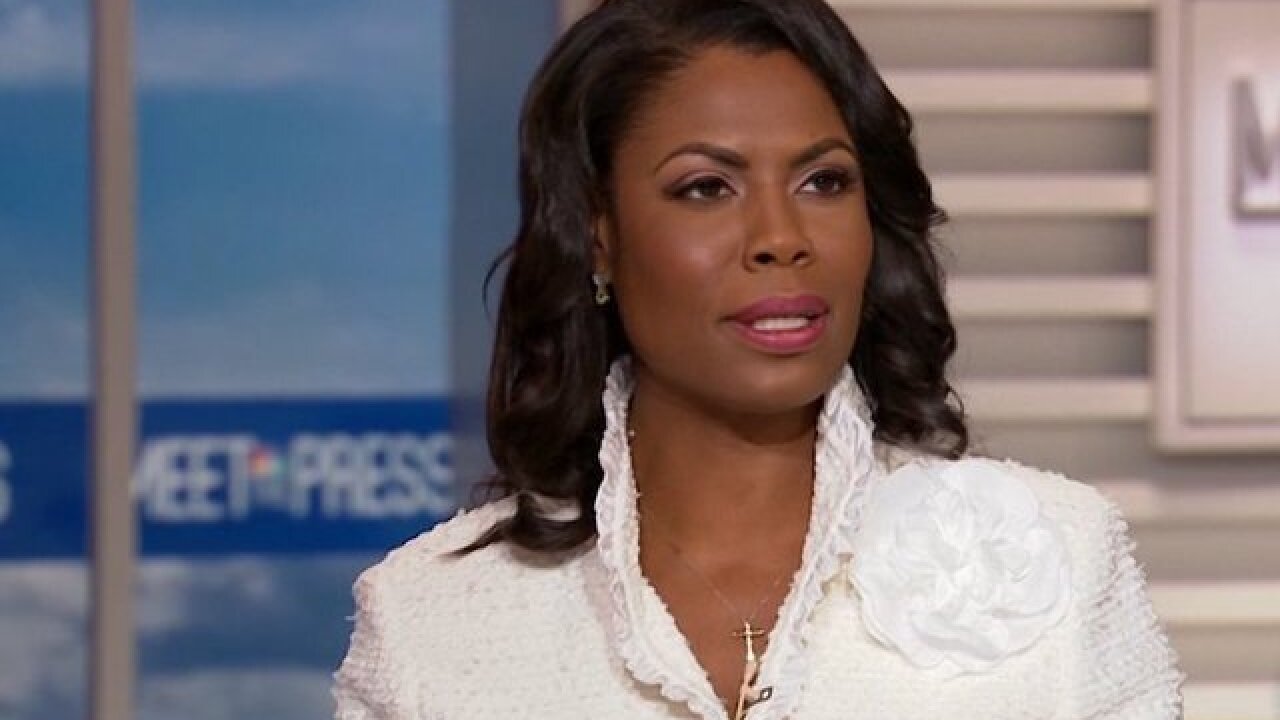 Omarosa Manigault Newman, the former "Apprentice" star and estranged aide to President Donald Trump, claimed on Sunday that she recorded White House chief of staff John Kelly firing her in the Situation Room.

Manigault Newman provided audio to NBC, which aired portions of her recording during an interview on "Meet the Press" and posted more online.

In one clip, Kelly can be heard saying she would be "leaving the White House."

"It's come to my attention over the last few months that there's been some pretty, in my opinion, significant integrity issues," Kelly said.

In audio NBC published online, Kelly tells Manigault Newman his concerns involve the "use of government vehicles and some other issues," and adds, "there's some money issues and other things, but from my view the integrity issues are very serious."

He can be heard in another clip aired by the network Sunday morning suggesting a smooth exit would help her reputation, a remark that Manigault Newman told NBC she took as a threat.

"I think it's important to understand that if we can make this a friendly departure we can all be, you know, you can look at your time here in the White House as a year of service to the nation, and then you can go on without any type of difficulty in the future relative to your reputation," Kelly said on the tape.

The final clip NBC aired showed Manigault Newman asking if Trump was "aware of what's going on" and Kelly interjecting and saying, "This is a non-negotiable discussion."

"I don't want to negotiate," Manigault Newman replied. "I just, I've never talked -- had a chance to talk to you, General Kelly, so if this is my departure, I'd like to have at least an opportunity to understand."

Kelly responded, "We can, we can talk another time. This has to do with some pretty serious integrity violations. So I'll let it go at that. So the staff and everyone on the staff works for me, not the President."

In a statement Sunday night, White House press secretary Sarah Sanders slammed Manigault Newman for making the recording and discussing it on television.

"The very idea a staff member would sneak a recording device into the White House Situation Room, shows a blatant disregard for our national security -- and then to brag about it on national television further proves the lack of character and integrity of this disgruntled former White House employee," Sanders said.

A White House official also told CNN that the Situation Room is a Sensitive Compartmented Information Facility and electronic devices are prohibited there.

Manigault Newman's differences with Kelly have been noted before and make up something of a subplot in her recent book where she parts starkly with Trump and criticizes his character.

Manigault Newman's book and recent revelations about her recordings have received significant pushback from the White House, and many of the claims she has made are unverifiable, leading to finger-pointing and accusations of dishonesty from both Manigault Newman and top Trump allies.

Asked during a photo-op at his New Jersey golf club Saturday about the developments, Trump responded, "Low-life. She's a low-life."

In Sunday's interview, Manigault Newman also built on her claim that after her firing, she was offered a job with the Trump campaign on the condition she sign a nondisclosure agreement, a report previously published by The Washington Post.

"They were not offering me a real job," Manigault Newman said on NBC. "They told me I could work from home, if I even wanted to work. They didn't really care if I showed up."

The former White House staffer detailed her claim in her forthcoming book, writing that the offer was a way to keep her from speaking out.

NBC showed the agreement on air, which included a strict non-disparagement agreement that would have prevented Manigault Newman from demeaning or disparaging Trump, Vice President Mike Pence, the campaign, their families and businesses.

The Trump campaign and Lara Trump declined to comment on Manigault Newman's description of the deal Lara Trump supposedly offered her.

In an interview on ABC's "This Week," Kellyanne Conway, a counselor to Trump, denied a raft of Manigault Newman's accusations, saying she had "undercut her own credibility."

Conway went on to hit Manigault Newman for the recordings she allegedly made during her time in the White House.

"You have a reasonable expectation of confidentiality and privacy in your conversations at your place of work," Conway said.

Ronna McDaniel, the chairwoman of the Republican National Committee, called Manigault Newman's recording "wildly inappropriate" and suggested she may have violated the law.

"Secretly recording conversations in the Situation Room isn't just wildly inappropriate, it's a threat to our national security. If she broke federal law, she should be prosecuted," McDaniel tweeted.