GRAND COUNTY, Colo. — In the span of just over 12 hours, a wildfire burning west of Denver grew in size sixfold, reaching nearly 200,000 acres and forcing evacuations in Grand County and the total closure of Rocky Mountain National Park.

Between Wednesday evening and Thursday afternoon, the East Troublesome fire exploded from a size of 19,086 to about 170,000 acres — making it the second-largest wildifre in state history. The top four largest wildfires in state history have all occurred this year.

Much of the fire growth is due to the weather, terrain and beetle-kill lodgepole pine, according to the incident management team. An incident commander for the fire said Thursday morning that the fire expanded 20 miles north of Granby and Grant Lake into Rocky Mountain National Park.

A Red Flag Warning is in effect until 6 p.m., and winds are expected make the fire extremely active Thursday, according to the incident management team. 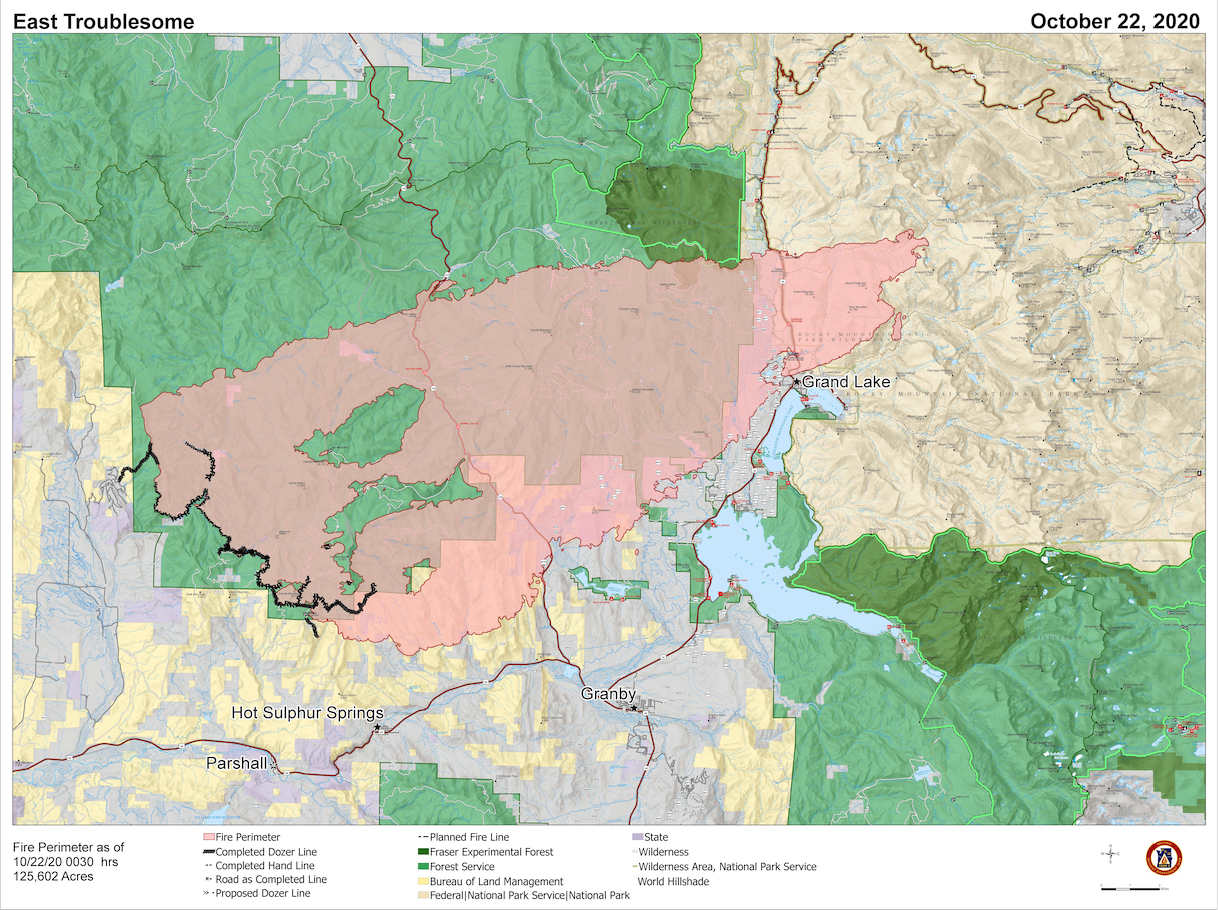 Just before 9 a.m. Thursday, a spokesperson from Rocky Mountain National Park announced the entire park had closed to visitors due to the fires west of the Continental Divide. Air quality is hazardous within the park.

The entire town of Grand Lake was evacuated Wednesday, along with all residents north, west and along Highway 34. Evacuees were told to go south on Highway 34, if possible.

Around 1 a.m. on Thursday in a Facebook video, Schroetlin explained just how difficult the day had been.

"I have a message," he said. "I'm not even sure what those words are. Today (Wednesday) has been an extremely, extremely challenging day for our community. We knew this fire was here. We knew the impacts of it. We looked at every possible potential for this fire. We never, ever expected 6,000 acres per hour to come upon our community."

He said the winds were strong and as a result, the fire's behavior was strong. They've never experienced challenges like Wednesday, he said. However, the community stepped up.

"As we drive around this northern part of Grand County, I don't know what we'll see in the morning, to be honest," he said. "But you know what? Together, as a community, we're going to get through this."

Schroetlin said authorities made "some incredible rescues" on Wednesday, including an incident where deputies were able to rescue four loggers whose vehicle had caught fire on a county road.

High winds followed by a cold front are expected Thursday. More resources are coming in to help around the Grand Lake and Granby areas.

This story was originally published by Stephanie Butzer on KMGH in Denver.