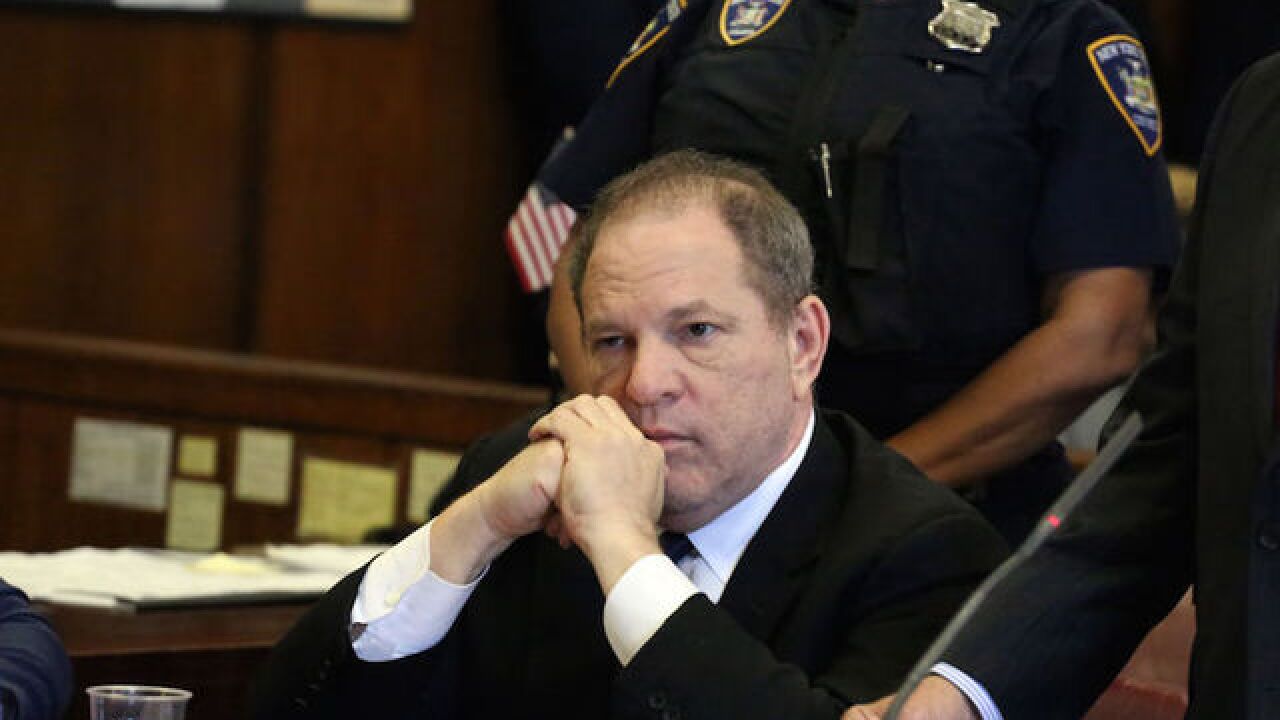 Image copyright 2018 Getty Images. All rights reserved. This material may not be published, broadcast, rewritten, or redistributed.
Pool
<p>Harvey Weinstein appears at his arraignment in Manhattan Criminal Court on July 9, 2018 in New York City. </p>

Noble accuses Weinstein of sexually assaulting her in a hotel bathroom in Cannes, France, in 2014 and says Weinstein coerced her with talk of a potential movie role for her.

The judge wrote it would be the first instance in which a plaintiff asked for the Trafficking Victims Protections Act to be applied to conduct like that alleged in the lawsuit.

Weinstein's lawyer said the act should not be applied.

"A typical sex trafficking case is someone who lures underage girls on the promise of a green card and locking them up in a basement and forcing them to have sex for money," Weinstein attorney Phyllis Kupferstein said.

According to court documents, Weinstein's legal team argued that the sex trafficking statute doesn't apply to this case because, "not every alleged sexual assault constitutes a federal violation" and the application of the statute "would unfairly expand the federal sex trafficking statute to all sexual activity occurring between adults in which one party holds a superior position of power and influence."

They argued that because nothing of value was exchanged by their client, the commercial sex act aspect was not met.

Weinstein, who also is facing criminal charges in New York, has denied all allegations of "nonconsensual sexual activity."

Weinstein's lawyer also said Tuesday the allegations in the lawsuit cannot be proven.

Sweet wrote in his opinion that the trafficking law could apply.

"While the instant case is not an archetypal sex trafficking action, the allegations plausibly establish that (Harvey Weinstein's) 2014 conduct in Cannes, France, violated (federal law)."

The judge wrote that other courts have applied the law to defendants who lured others with false promises for sexual purposes.

In her complaint, Noble says she met Weinstein in February and he asked for an example of her acting, called a reel.

Three months later Weinstein and Noble bumped into each other at his hotel in Cannes and he asked her to come to his room to review her reel, Noble says.

Her complaint says that in his room he began massaging Noble and gripped her shoulders -- telling her she needed to relax, and if she did, his people would "take care of everything" for her.

At some point, the suit alleges, he got a person on the phone whom he said was a producer who told her to be "a good girl and do whatever he wished," referring to Weinstein, and if she did "they would work" with her, the lawsuit alleges.

Noble says she is not sure who the person was.

After that, the suit alleges Weinstein groped her breasts. She resisted but felt "compelled to comply because of the tangible and intangible benefits" Weinstein offered to advance her career.

The lawsuit says Weinstein pulled her into the hotel bathroom and started to sexually assault her. Noble says she told him to stop and attempted to leave the bathroom, but he blocked her exit.

She described other unwanted contact and sexual actions and says she repeatedly implored him to stop.

He told her, "Everything will be taken care of for you if you relax," the lawsuit says.

"We believe these claims are not legally or factually supported, and ultimately will not be sustained," Kupferstein said.

Harvey Weinstein's legal team will ask the judge whether they can appeal the ruling.

The law firm representing The Weinstein Company had no comment. The company is involved in Chapter 11 bankruptcy proceedings and a litigation stay is in place for all legal matters, including Noble's case, Sweet wrote.