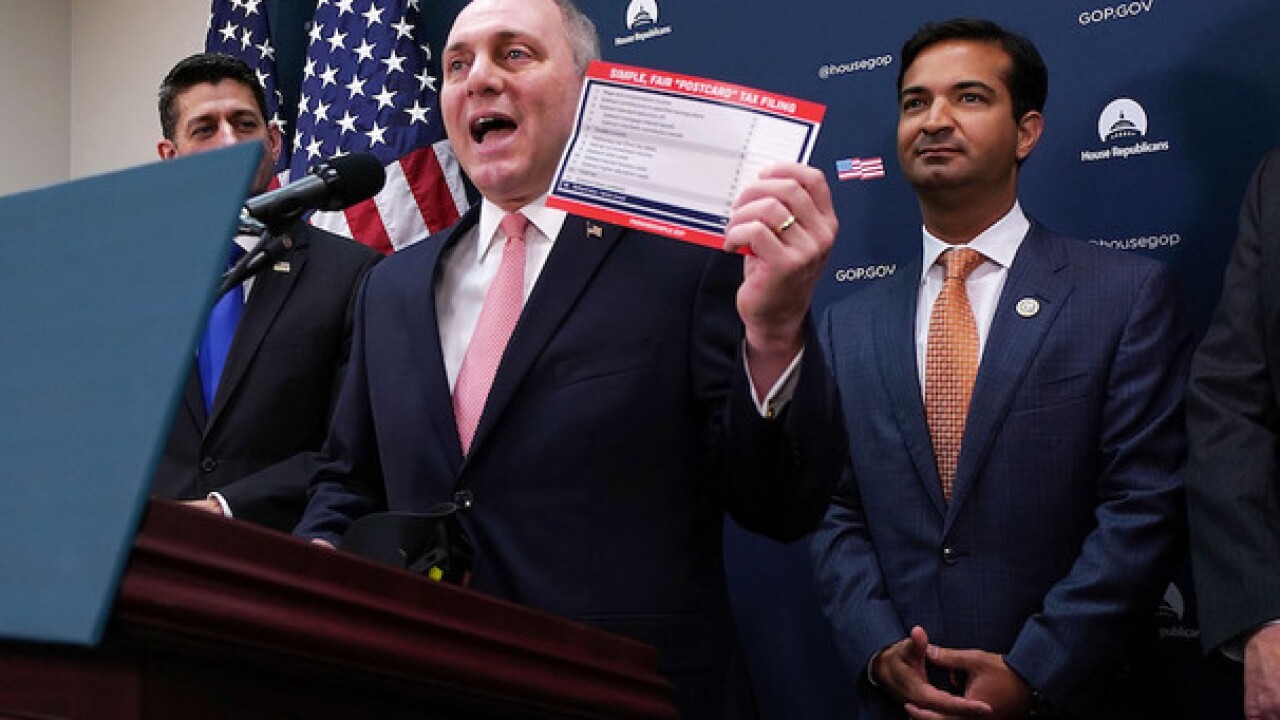 Copyright Getty Images
Chip Somodevilla
<p>House Minority Whip Steve Scalise (R-LA) holds up a sample of a single-sheet tax return during a news conference with Rep. Carolos Curbelo (R-FL) (C) and House Majority Leader Kevin McCarthy (R-CA) following the weekly House Republican Conference meeting at the U.S. Capitol October 24, 2017 in Washington, DC. Speaker of the House Paul Ryan (R-WI) and the GOP leadership said that tax cuts and reforms are their priority and they hope to get legislation out of the House by the Thanksgiving holiday.</p>

House Republicans are unveiling key details and the text behind their tax legislation Thursday, but not without some reservations from rank-and-file members.

In advance of the bill's release -- which will be called the "Tax Cuts and Jobs Act," according to a source in a meeting with GOP members Thursday -- a source shared a summary of the plan, which permanently lowers the lowers the corporate tax rate to 20% and limits the home interest deduction to loans up to $500,000.

The bill will also increase the standard deduction for individuals and households, repeals the alternative minimum tax and increased the child tax credit to $1,600. The House GOP bill will also finally repeal the estate tax in 2024.

Members will see the tax framework Thursday morning when the House ways and means committee releases its bill that is expected to expand the child tax credit, repeal the estate tax, lower the corporate tax rate and reduce the number of individual tax brackets from seven to four.

But there are still key questions about what will be in the bill and whether the leadership can wrangle the votes they will need to deliver President Donald Trump a major legislative victory by the end of the year.

Now, the hard work begins of both selling the bill and keeping special interests at bay. Many lobbyists on K Street and outside groups admit the GOP lawmakers have kept a tight lid on the process. Once groups see what has been cut and what has been saved, winners and losers will be defined and the fight to preserve valuable tax breaks will begin. Over the weekend, one group, the National Association of Home Builders, already came out against the not-even-released bill.

The legislation has also struck a nerve with a group of New Jersey and New York Republicans who are opposed to rolling back a popular local and state tax deduction known as SALT. House Ways and Means Chairman Kevin Brady already made a key concession when he said that he will still allow individuals to deduct their property taxes in the new bill. But that still wasn't enough for some who wanted to see the income deduction restored as well.

"We are not there yet," said Rep. Lee Zeldin, a Republican from New York told reporters just hours before the bill was released.

House Majority Leader Kevin McCarthy, a California Republican, notes he's from a state with high state and local taxes and says lawmakers pushing for changes need to take a broader look at how the reform package will benefit their constituents.

"What's happening is people are looking at this as one item instead of looking at everything we are doing, lowering the rate, doubling the standard deduction," McCarthy told CNN. "You're better off with this."

Republican leaders have argued that the party learned valuable lessons from the health care debate that crashed and burned in the Senate this summer.

But, already, the GOP encountered a setback Tuesday with deadlines when Brady announced that the bill's release would be delayed by a single day. Some members also fear the GOP's tax effort in the House has shared some frustrating parallels with Obamacare repeal.

For one, Republicans are spooked by the ambitious timeline that has been laid out by their leadership. Members are expecting to get a massive tax bill Thursday only to turn around and amend it in committee days later.

"We started differently on tax reform than we did health care, but I hope that we don't end up back on the same tracks that led us to the debacle on health care," said Rep. Mark Walker, the chairman of the Republican Study Committee. "We know this is going to be hundreds of pages and being able to take the time to process it fairly is something that is crucial."

During a closed-door meeting Wednesday, some members tried to voice concerns with the tax process with White House Director of Legislative Affairs Marc Short.

Rep. Tom Cole, a Republican from Oklahoma who is close to leadership, said the message from members was simply "we need to know more."

Another twist that came up in the hours before the bill was released came from Trump himself.

The President tweeted Wednesday morning that he wanted to see a repeal of the individual mandate in the tax bill, a move that many House and Senate republicans openly admitted would complicate the process.

"Wouldn't it be great to Repeal the very unfair and unpopular Individual Mandate in ObamaCare and use those savings for further Tax Cuts for the Middle Class. The House and Senate should consider ASAP as the process of final approval moves along. Push Biggest Tax Cuts EVER," Trump wrote in a series of two consecutive tweets.

"I do not believe you are going to see anything health care related in this bill -- at the eleventh hour 59 minute, 58 second mark, I don't," Republican Rep. Chris Collins of New York told reporters.

"There's no time to even deal with it, that I see," Collins said flatly, adding, "I believe we are too far along."

New Jersey GOP Rep. Tom MacArthur, who has been pressing leaders to maintain a tax deduction for property taxes told reporters he's still negotiating with leaders, and if he and others from high tax states don't get what they want in the bill unveiled tomorrow they will keep pushing as the measure moves through the legislative process.

"If the bill can't pass, there will be compromises," MacArthur said. "I guarantee you that."