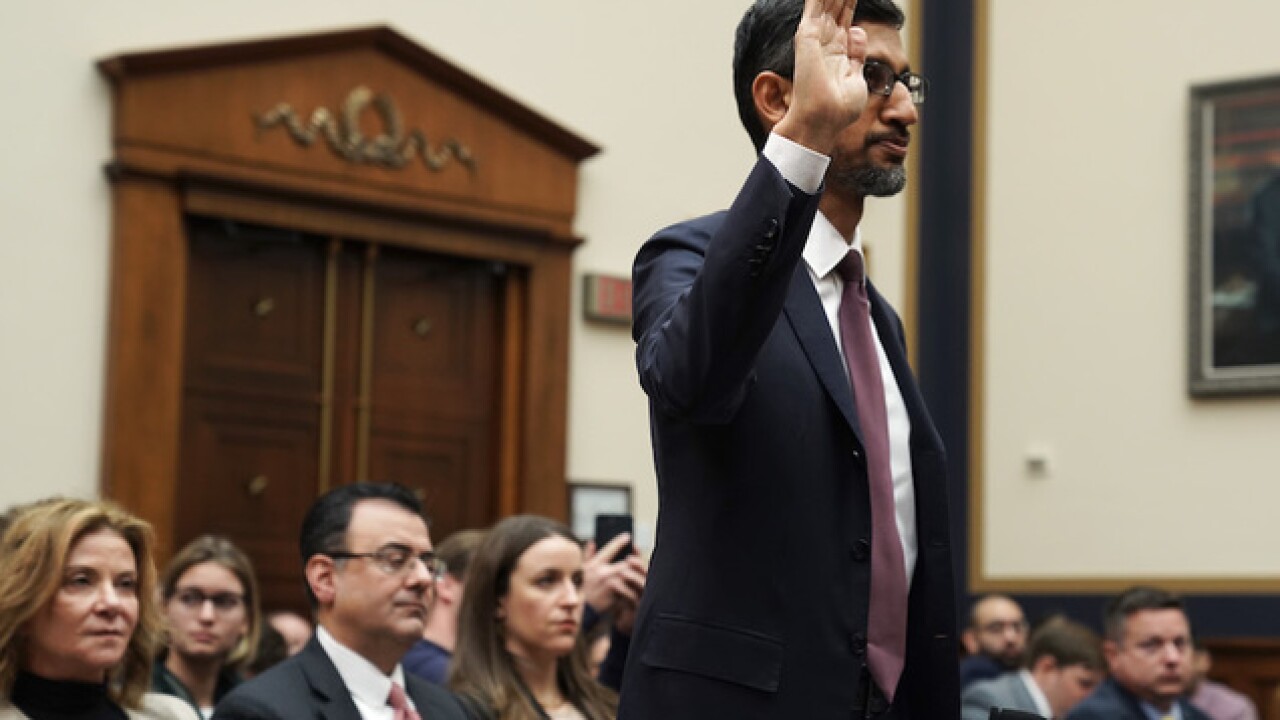 Image copyright 2018 Getty Images. All rights reserved. This material may not be published, broadcast, rewritten, or redistributed.
Alex Wong
<p>Google CEO Sundar Pichai testifies before the House Judiciary Committee at the Rayburn House Office Building on December 11, 2018 in Washington, DC. The committee held a hearing on "Transparency & Accountability: Examining Google and its Data Collection, Use and Filtering Practices.</p>

Google chief executive Sundar Pichai appeared on Capitol Hill Wednesday where he faced questions from lawmakers on a number of issues, including data privacy, misinformation, a search product being developed for China, and allegations from Republicans that the search engine giant is biased against conservative users.

"All of these topics -- competition, censorship, bias, and others -- point to one fundamental question that demands the nation's attention: Are America's technology companies serving as instruments of freedom—or instruments of control?" House Majority Leader Kevin McCarthy said at the outset of the hearing, which was held by the House Judiciary Committee.

McCarthy added, "[T]he Free World depends on a free Internet. We need to know that Google is on the side of the Free World, and that it will provide its services free of anti-competitive behavior, political bias, and censorship."

The hearing, Pichai's first before Congress, came just a few months after a different attempt to get him to Capitol Hill turned so contentious that a Senate committee featured an empty chair in his place at a hearing.

The House Judiciary Committee has questioned technology executives at hearings throughout the year, most recently Twitter (TWTR) chief executive Jack Dorsey in September.

Those hearings have focused primarily on whether technology companies are biased against conservative users, but have touched on other issues.

Allegations of bias against conservatives

In his opening remarks, Pichai stressed to members of the House Judiciary Committee that the company operates in a nonpartisan fashion, a point he reiterated a number of times throughout the hearing.

"I lead this company without political bias and work to ensure that our products continue to operate that way," Pichai said. "To do otherwise would go against our core principles and our business interests."

Throughout the hearing, Pichai was repeatedly asked whether the search engine discriminates against conservative politicians and ideas.

"What actions are you going to take to counter...political bias," Smith asked.

Pichai said he would be "happy to follow up" with Smith and "explain the methodology" behind how Google surfaces results.

Republican members of the House Judiciary Committee have a history of leveling unfounded accusations of bias against technology companies.

Often citing no real evidence, and regularly appearing to fail to grasp the basics of how various technology companies operate, Republicans on the committee have allowed hearings on the issue to drift into conspiratorial waters.

They have cited fringe media outlets to accuse tech companies of political bias. They also invited pro-Trump social media personalities "Diamond & Silk" to testify at one hearing, and did not stop them from offering a significant amount of false information during their testimony.

A search engine for China?

Pichai was questioned by several lawmakers on whether Google is developing a search engine for China. Such a product, reportedly codenamed "Project Dragonfly" internally, would be forced to comply with Beijing's censorship and has spurred concerns from human rights advocates.

Pichai told the committee that Google currently has "no plans" to launch a search product in China.

However, when pressed by Democratic Rep. David Cicilline, Pichai conceded that there has been an "internal effort" at Google around a potential product for China. Pichai said the effort was being led by the company's search team. He characterized it as a "limited effort."

When asked whether Pichai would rule out "launching a tool for surveillance and censorship in China" while he is CEO, Pichai declined to answer with a yes or no.

"One of the things that's important to us as a company -- we have a stated mission of providing users with information," Pichai said. "I have a commitment, but as I've said earlier on this we'll be very thoughtful and we'll engage widely as we make progress."

Pichai later told the committee that the project has been "underway for a while" and that at one point his understanding was that more than 100 employees were working on it.

While he was testifying, a protester opened the doors to entrance of the hearing room and held up a sign about the project.

Pichai was pressed by lawmakers on how much data Google collects from its users, especially on its Android operating system.

Pichai largely conceded that Google collects a vast amount of data on its users, but stressed throughout the hearing that the keys to personal data on users are closely guarded and not widely available to Google employees.

Pichai noted that Google offers its users tools to determine how much information it is allowing Google and applications on the Android operating system to collect on them.

Pichai said that millions of users make changes to their account settings each day, and that 160 million individuals had checked their privacy settings in the last month.

But, in conversations with lawmakers, Pichai conceded that the company can do more to make it easier for users to control what data they allow to be collected on them.

Pichai faced a number of questions, in particular, on the location information that Google collects on its users.

He conceded that it is a "complex area," but said that location information is now part of the "fabric of how people use the internet."

During the hearing, Pichai was also questioned about the company's role in spreading misinformation and hate speech.

Following a Monday report by The Washington Post that found that hateful and conspiratorial content, including neo-Nazi propaganda, is still rampant on YouTube, whose parent company is Google, Democratic Rep. Jerry Nadler asked Pichai what the company was doing to "combat white supremacy and right-wing extremism."

"If we find violations, we will take down the content," Pichai said.

When Democratic Rep. Jamie Raskin pressed Pichai specifically on the findings of the Post's story, which found that hateful content remained online and was recommended to users by YouTube's algorithm, Pichai conceded the company needed to do better.

"We are constantly undertaking efforts to deal with misinformation. We have clearly stated policies and we have made lots of progress in many of the areas where over the past year" Pichai said, adding, "We are looking to do more."