Former Veeps and VP nominees: Where are they now? 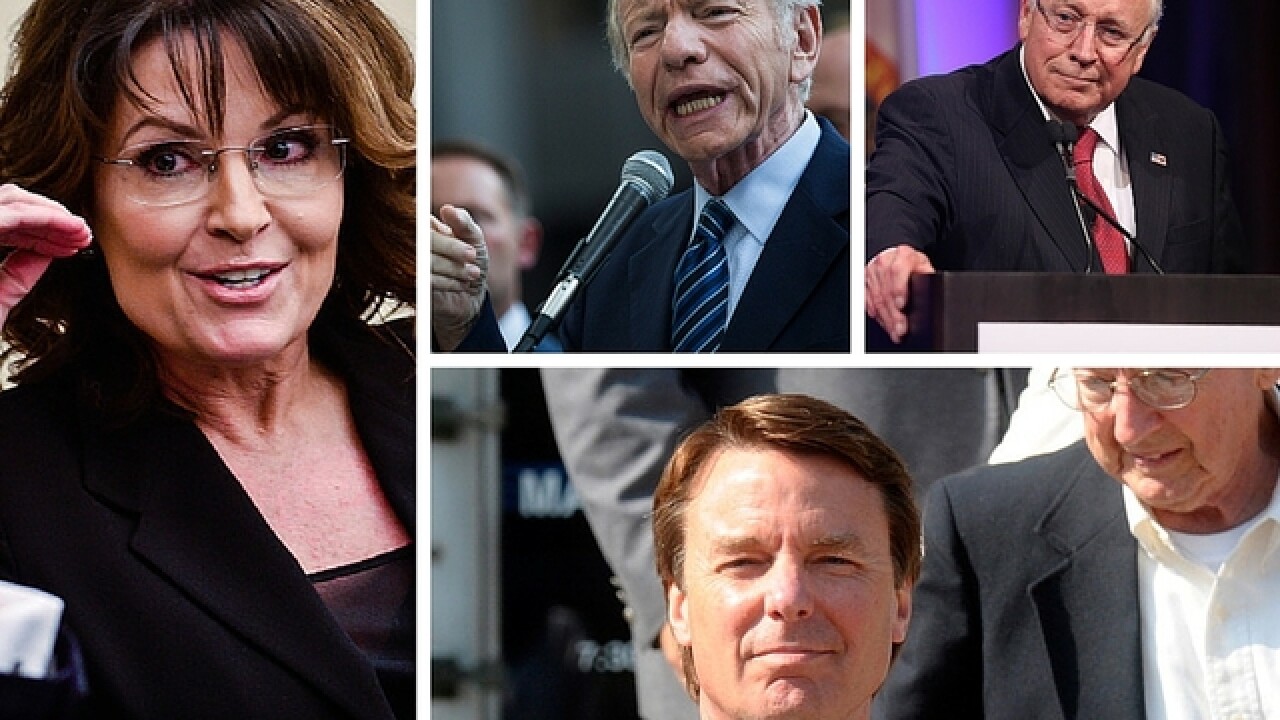 To the layman, the vice presidency might seem like the second-most powerful job in the free world. But that's not always the case. The Constitution doesn't spell out much responsibility to the vice president besides leading the Senate, and even then he's only called to vote in the case of a tie.

So, is accepting the bottom half of a presidential ticket really a good move for an ambitious politician? See how it turned out for these former veep nominees and decide for yourself.

After serving as President George W. Bush’s vice president from 2001-2009, Dick Cheney hasn’t held elected office — or any office, for that matter. But that doesn’t mean he hasn’t been quiet on the political front.

Cheney has been critical of Barack Obama throughout his presidency on foreign policy, especially in terms of foreign policy. He’s often referred to Obama as a “weak” President. He was also one of the first GOP politicians to speak out in favor of gay marriage in 2009.

Though he remains semi-active in politics, Cheney has suffered a number of health setbacks since leaving office. In 2010, he suffered his fifth heart attack, and received a heart transplant in 2012.

Cheney has also published two books since leaving office: In My Time: A Personal and Political Memoir and Exceptional: Why the World Needs a Powerful America.

Sen. Joe Lieberman (D-Con.) was Al Gore's choice for running mate for the 2000 presidential election. After his ticket lost a historically close election to George Bush and Dick Cheney, Lieberman remained a staple in the Senate for more than a decade.

Lieberman was re-elected to the Senate two more times in 2001 and 2007. During that span, he helped create the Department of Homeland Security and introduced legislation that led to the repeal of the Army's "Don't Ask, Don't Tell" law.

Lieberman retired when his term in Congress was up in 2013.

When John Kerry selected North Carolina Senator John Edwards as his running mate in 2004 after a spirited presidential campaign, Edwards was seen as a rising star in the Democratic Party. But a little more than a decade later, Edwards' star has burnt out.

Edwards staged another presidential run in 2008, but finished in a distant third to Hillary Clinton and Barack Obama. Shortly after conceding defeat, scandal struck.

In August 2008, Edwards admitted to an extramarital affair with a young actress but denied rumors that he fathered a child with the woman. It wouldn't be for another two years, in 2010, until he fully admitted to fathering a child with his mistress.

All of these rumors swirled while Edwards' wife, Elizabeth, was battling breast cancer. She died in 2010.

Edwards would eventually be indicted on charges that he used campaign finance funds to cover up his affair. in 2011, he was found not guilty on one count of corruption charges while a mistrial was declared on five others.

Sen. John McCain stunned the political world in 2008 when he picked Alaska Gov. Sarah Palin as his running mate. The two may have come up short in their bid for the White House, but Palin remains active in politics today — in a different role.

After resigning as Alaska's governor in 2009 amid ethics investigations, Palin has transformed herself into a conservative pundit. She appeared on Fox News regularly from 2010 to 2015, and attempted to start her own online subscription news station before ending the project in 2015.

She's campaigned for a number of Tea Party candidates and taken an active role for campaigning for Donald Trump.

Joe Biden has served as the nation's VP for eight years since Barack Obama brought him on to his ticket in 2008 after a short presidential campaign. In his time as veep, Obama has turned to Biden to head a number of task forces on topics such as gun violence, sexual assault and cancer.

Biden has also struggled with personal tragedies in his years as vice presidency, most notably the death of his son Beau to brain cancer in 2015.

In late 2015, Biden announce he would not run for President in 2016, a decision he says he now regrets.

In the four years since Mitt Romney named Paul Ryan to his ticket in the 2012 presidential race, Ryan has emerged as the GOP's reluctant leader.

In late 2015, when House Speaker John Boehner reluctantly resigned, Republicans immediately turned to Ryan as a candidate for the new speaker. Despite initially saying he would not take the job, Ryan eventually agreed to lead the House of Representatives after speaking with leaders on both sides of the aisle.

Ryan was also seen as a potential replacement for Donald Trump by the "Never Trump" movement. However, Ryan eventually endorsed the New York businessman despite their "differences."