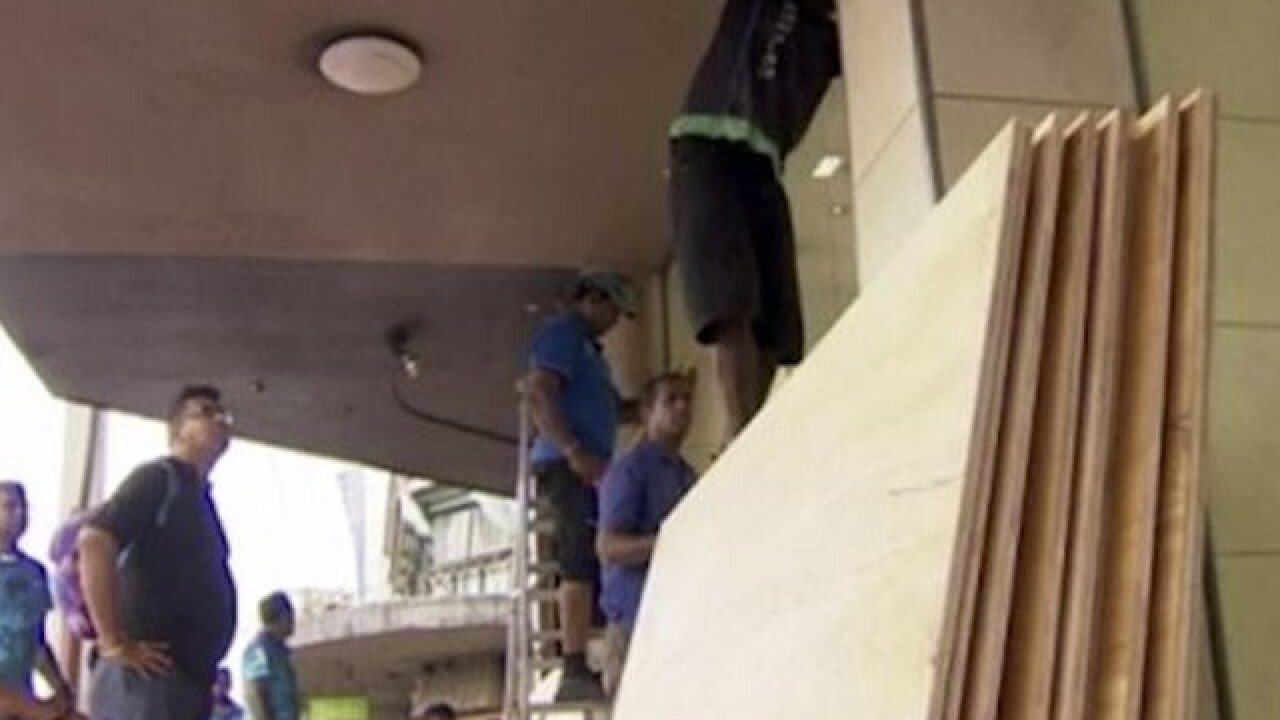 Copyright Associated Press
<p>In this image made from video, residents board up windows as they prepare for the arrival of Cyclone Winston on Saturday, Feb. 20, 2016, in Nadi, Fiji. The Pacific island nation of Fiji was hunkering down Saturday as a formidable cyclone with winds of 300 kilometers (186 miles) per hour bore down. (TVNZ via AP Video) NEW ZEALAND OUT, NO SALES</p>

WELLINGTON, New Zealand (AP) — Residents of Fiji were beginning to clean up and assess the damage Sunday after a ferocious cyclone tore through the Pacific island chain overnight and killed at least one person.

Aid workers said it would take at least a day to establish communications with some of the smaller islands that were directly in Cyclone Winston's path. There were widespread reports of damage, with many homes and crops destroyed.

Authorities were urging people to remain indoors as they cleared fallen trees and power lines. They said all schools would be closed for a week to allow time for the cleanup.

One man on Koro Island had died in the cyclone, authorities said, although they didn't yet have details of the circumstances.

On Saturday, the government imposed a nationwide curfew and declared a 30-day state of natural disaster, giving extra powers to police to arrest people without a warrant in the interest of public safety.

Wind speeds from Cyclone Winston were estimated at up to 285 kilometers (177 miles) per hour. The cyclone moved westward overnight along the northern coast of the main island, Viti Levu, before continuing out to sea.

Fiji's capital, Suva, located in the southern part of the main island, was not directly in the cyclone's path and avoided the worst of its destructive power.

"Truth be told, we've gotten off pretty lightly here in the capital," said Alice Clements, a spokeswoman for the aid agency UNICEF who lies in Suva. "It was still a pretty awful night. You could hear crashing trees and power lines, and popping rivets as roofs got lifted and ripped out."

She said there's foliage everywhere which looks like it has been put through a blender.

Clements said there's real concern for the welfare of people on the northern part of the main island and smaller islands elsewhere. She said many would have lost their homes and livelihoods.

She said the Fijian government is responding quickly by clearing vital roads.

Flights to Fiji were canceled on Saturday and Clements said some tourist resorts on the outer islands may have suffered damage.

Prime Minister Voreqe Bainimarama wrote on social media that the island's evacuation centers were operational and that the government was prepared to deal with a potential crisis.

"As a nation, we are facing an ordeal of the most grievous kind," he wrote. "We must stick together as a people and look after each other."