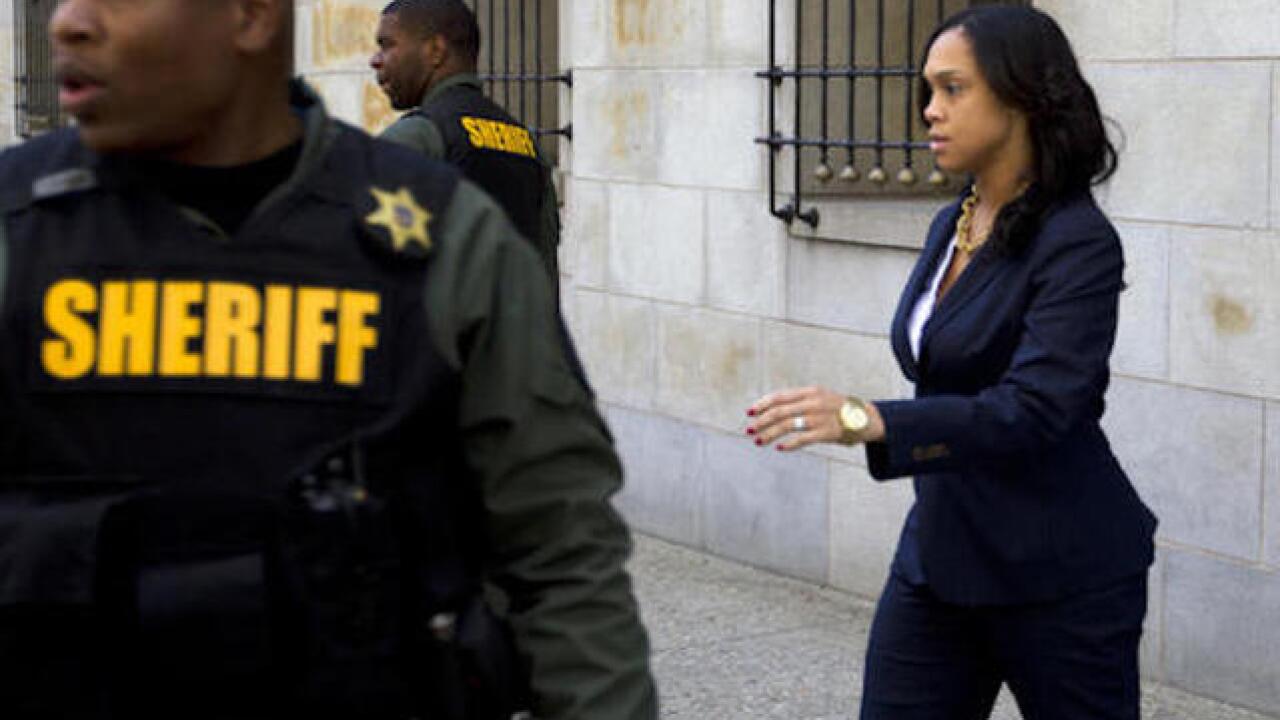 BALTIMORE (AP) — Is it ethical for Baltimore's top prosecutor, who staked her reputation on charging six police officers in the death of Freddie Gray, to keep trying for a conviction? Legal experts said Friday that State's Attorney Marilyn Mosby is obligated to consider this question.

Mosby seemed devastated after the trial judge found no evidence a crime was committed when the young black man's neck was broken in the back of a police van.

The acquittal of van driver Caesar Goodson on all counts Thursday was more than just a courtroom setback, given the stakes Mosby raised last year when she announced the charges shortly after riots shook the city.

Stressing the ethical demands of her office and repeatedly invoking the civil unrest, Mosby vowed then to represent the aggrieved citizens of Baltimore who "experienced injustice at the hands of police officers."

"To the people of Baltimore and the demonstrators across America: I heard your call for 'No justice, no peace," she declared, her voice rising in righteousness and outrage. "You're at the forefront of this cause and as young people, our time is now."

"I think she understands her ethical obligations," said University of Baltimore President Kurt Schmoke, who had Mosby's job in the 1980s before serving as the city's mayor.

"If I were in her position, I'd take the next couple of days to reevaluate the cases under these new circumstances. If she felt that the rest of the evidence that she has is not as strong as she felt last May, then I would think she would probably conclude that she shouldn't proceed," Schmoke said.

Neither Mosby and all others involved are bound by a gag order from commenting.

In court, her prosecutors argued that Goodson's inaction alone proved his intent to do harm.

They said he was criminally negligent because he didn't restrain the prisoner with a seat belt to keep him safe inside the metal compartment, and didn't get medical help after Gray repeatedly indicated he needed it.

Gray was healthy enough to run from officers before his arrest. When he arrived unconscious and incontinent at the station 45 minutes later, his neck felt "like a bag of rocks," one medic testified.

But the judge said he saw no evidence of individual culpability by Goodson, the only one of the officers to be with Gray the entire time, and to be charged with murder.

"The failure to seatbelt may have been a mistake or it may have been bad judgment," Williams said, but "the state has failed to meet its burden to show that the actions of the defendant rose above mere civil negligence."

In civil court, Gray's family could have sought compensation under a lower standard of proof. Instead, the city settled even before the young black man's family sued, agreeing to pay them $6.4 million.

The patience of people in Baltimore's inner city has been tested by each verdict. As if to confirm their complaints of unequal justice, a young man who admitted looting and torching the CVS pharmacy during the riots was given a 15-year prison sentence on Friday.

But the four officers still facing charges will likely opt for non-jury trials before the same judge, and that should weigh heavily as Mosby decides how to proceed, legal experts say.

"The job of a prosecutor isn't to obtain a conviction at all costs," said David Weinstein, a defense attorney who spent 10 years as a state prosecutor and another 11 as a federal prosecutor. "It's right for a prosecutor to strike hard, but they need to be fair."

"Her decision was to jump quickly into a prosecution of these police officers, and as a result she didn't have all the evidence in front of her," Weinstein added. "She needs to reassess what she's going to do."

Attorney Eric Schaffer, a former county prosecutor in Maryland, said "proving a negative is always hard, and proving a criminal intent where there's no overt act is always extremely difficult."

Schaffer said he was stunned when Mosby, just weeks into her job, charged the officers just 12 days after Gray's death. His office spent months investigating much less complex cases, he said.

"As a prosecutor, in my opinion, you shouldn't be in a rush," he said. "Take your time and analyze it and don't let political pressure force you into doing something that's not right."