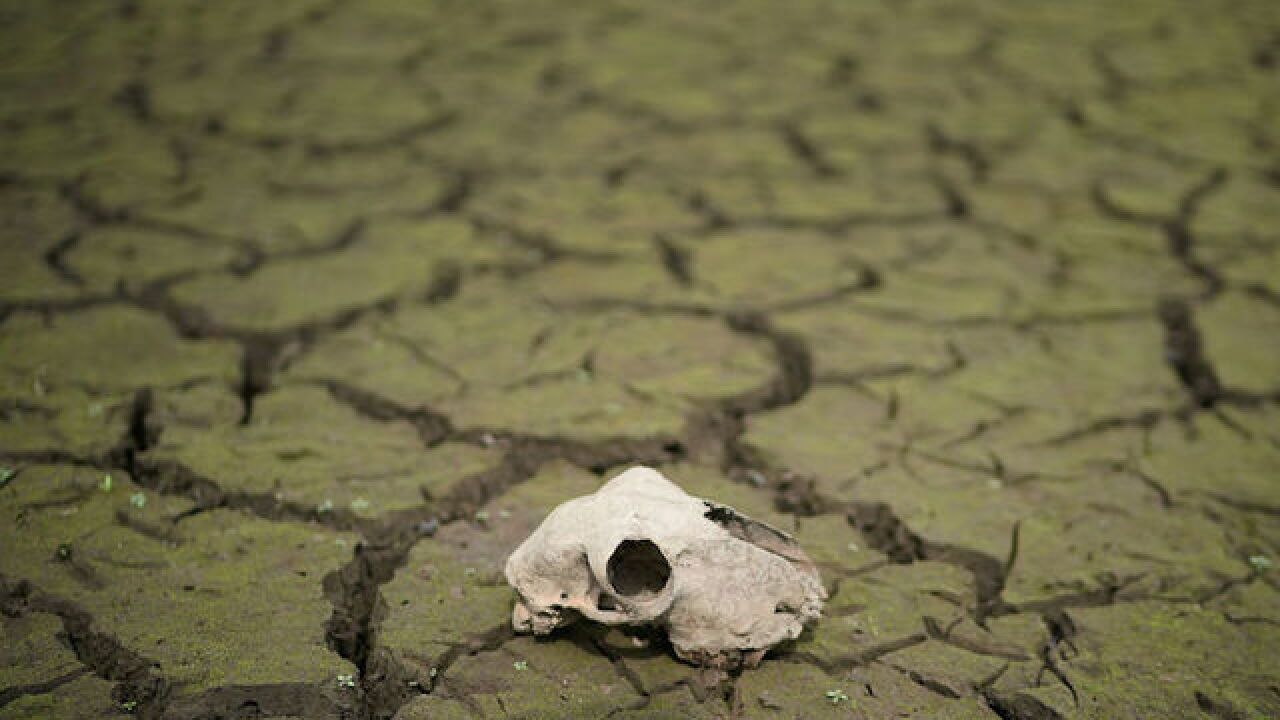 Image copyright 2018 Getty Images. All rights reserved. This material may not be published, broadcast, rewritten, or redistributed.
Christopher Furlong
<p>The dried up bed of Wayoh Reservoir near Bolton as the heatwave continues across the UK on July 23, 2018 in Bolton, England. </p>

Scientists are warning that a domino effect will kick in if global temperatures rise more than 2 degrees Celsius above pre-industrial levels, leading to "hothouse" conditions and higher sea levels, making some areas on Earth uninhabitable.

The report, "Trajectories of the Earth System in the Anthropocene," published Monday in the American Proceedings of the National Academy of Sciences, said "hothouse" temperatures could stabilize 4 degrees to 5 degrees Celsius (39 to 41 Fahrenheit) higher than pre-industrial levels.

"Human emissions of greenhouse gas are not the sole determinant of temperature on Earth. Our study suggests that human-induced global warming of 2 degrees Celsius may trigger other Earth system processes, often called 'feedbacks,' that can drive further warming -- even if we stop emitting greenhouse gases," lead author Will Steffen of the Australian National University said.

Hotter temperatures could result in sea level rise up to 60 meters (32 to 197 ft) from today's shorelines, swamping coastal populations and forcing communities inland. This summer dozens of people have died in wildfires and heat waves from the US to Asia, giving the world an insight into what could lie ahead.

The report says that if the "threshold" -- a theoretical point-of-no-return -- is crossed, this "would lead to a much higher global average temperature than any interglacial in the past 1.2 million years and to sea levels significantly higher than at any time in the Holocene," referring to the geological age which began at the end of the last ice age, around 12,000 years ago.

Many scientists argue that we have entered a new geological era, the Anthropocene, in which human activity is directly affecting the planet.

Katherine Richardson of the University of Copenhagen, one of the report's co-authors, told CNN the idea of a tipping point is not new. "We've always realized there might be a point of no return," she said.

"The implications are that if we can't stop it we're in a hell of a mess. Our societies could not continue the way they are now with an average temperature increase of 4 degrees to 5 degrees Celsius (and) 10 to 60 meter sea level rises. It would simply be unbearable for our society."

"Avoiding this scenario requires a redirection of human actions from exploitation to stewardship of the Earth system," Steffen said.

More than 200 countries pledged to take action on climate change under the Paris Accord struck in 2015. The agreement pushed signatories to work together to keep temperatures from rising more than 2 degrees Celsius above pre-industrial levels. However, there are no binding targets, and the US later pulled out, dealing a blow to global efforts to form a united front against climate change.

The report highlights the consequences of how the interactions between a variety of climate change factors, such as the loss or weakening of carbon sinks, forest dieback, ice retreat and increased bacteria respiration, could combine to form a feedback loop which accelerates climate change.

"These tipping elements can potentially act like a row of dominoes," said Johan Rockstrom, co-director of the Potsdam Institute for Climate Impact Research and another of co-author of the report.

"Once one is pushed over, it pushes Earth towards another. It may be very difficult or impossible to stop the whole row of dominoes from tumbling over. Places on Earth will become uninhabitable if 'Hothouse Earth' becomes the reality."

The report comes as much of the northern hemisphere struggles with deadly heatwaves and raging wildfires, which most scientists attribute to man-made climate change.

Richardson says that while the current weather can't in isolation be used as proof of the effects of climate change, the summer's extreme heat means that people may be more receptive to the urgency of the situation.

"People getting a taste of the heatwaves, this is what climate change is all about," she said.

"What this is all about is humanity is recognizing the fact that we need to manage our resources at a global level... When we can see that we can impact the climate, then it becomes part of our responsibility to maintain the earth system."

To reverse this potential domino effect, climate change needs to be combated on all fronts, the report says, with "collective human action" is required to steer us away from this potential threshold, including "decarbonization of the global economy, enhancement of biosphere carbon sinks, behavioral changes, technological innovations, new governance arrangements, and transformed social values."

Richardson said that rather than considering the report a "doomsday prophet," it should give hope that if action is taken now, the world can avert the most dire predictions.

"I think this paper has a positive message. If we understand this system and how it works, then we have the power to go in and trick the system.

"Knowledge is power -- the more we know the more possibilities to manage it to our positive outcome (we have,)" she said.