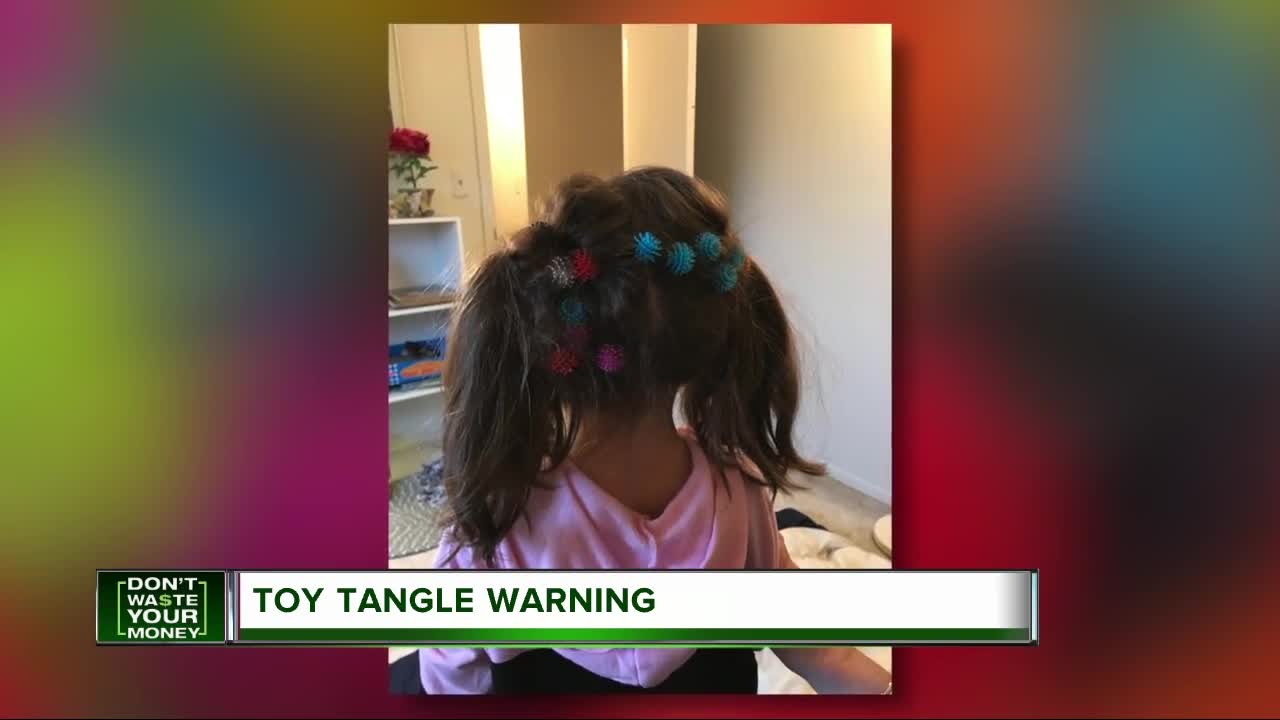 CANTON, Mich. -- A Michigan couple is warning parents about a popular toy after more than 40 of its small Velcro-like pieces got tangled up in their daughter's hair for hours.

You can bunch them and build them. Kids love playing with this Velcro-like toy called Bunchems, but one family learned the hard way that fun can come with a price.

"Can you believe we had to cut these out? Look at those."

These small building balls, tangled in clumps of hair serve as a painful reminder of a memory this family wants to forget.

Earlier this month, Anastasia Sakakini got a call from her mom.

The kids had been at grandma's playing with Bunchems, a toy made up of small velcro-like balls with hooks that connect together to build various creations. But the family says they discovered if one mistakingly "connects" with your hair, you've got a problem.

"He maybe put this much in my hair."

The family says there were 40 pieces lodged in 7-year-old Marina's locks.

"They don't look bad from the surface, but as soon as you started to pull them out, they only got worse."

"I wish it was just like a nightmare in my dream, but it's not."

Anastasia says after hours there was still no progress, she worried she'd have to cut her daughters hair off. That is until dad stepped in with some tweezers.

"I had to scrape the Bunchem ball and pull the hair up, and I had to be careful because if I let it go and it dropped, it would ravel back in her hair," dad explained.

He says each small piece took 15 minutes to unravel. Her hair was thankfully saved. But as it turns out, it's not a nightmare unique to them.

A quick search under the words "Bunchems hair" and you'll see an endless story log of families across the country who have faced the same problem.

And if you think the toy's manufacturer should know about it? Well, they do. Turns out, complaints to the company stem back to 2015. But the makers didn't change the toy. Instead, it responded by putting out an instructional video on how parents can remove the pieces from hair.

This family says it did little to help.

"It's not acceptable to be on the market."

When WXYZ reached out to toy manufacturer, Spin Master, they defended the toy saying Bunchems:

"Are intended only to be adhered to other Bunchems. This is particularly important for parents and caregivers to understand. The Bunchems packaging and directions clearly state "Caution: keep away from hair. May become entangled."

The Sakakinis say that label doesn't do enough.

So they'll be booting Bunchems out of their house, relieved to know that they'll never be caught in a toy tangle again.

This story was originally published by Ameera David at WXYZ.