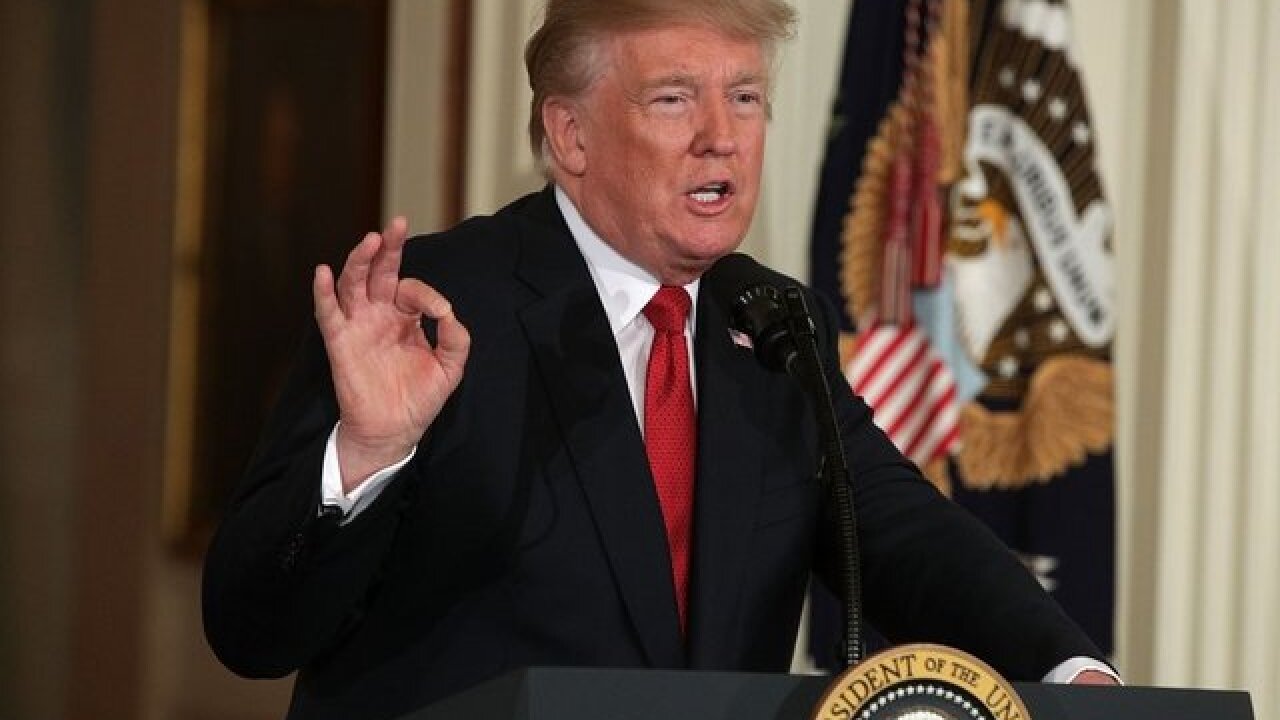 "President Trump did disrespect my son and my daughter and also me and my husband," Cowanda Jones-Johnson said.

President Donald Trump denied Wednesday the account of a Democratic congresswoman that he told the widow of a US serviceman killed in an ambush in Niger that "he knew what he signed up for, but I guess it still hurt."

"Democrat Congresswoman totally fabricated what I said to the wife of a soldier who died in action (and I have proof). Sad!" he tweeted. He did not immediately provide proof to back the claim. CNN has reached out to the White House.

The response opened up a fresh round of controversy over Trump's response to the Niger attack and how he's handled the most solemn duty of a commander in chief. It took Trump days to publicly discuss the attacks, and earlier this week, he falsely claimed that former President Barack Obama didn't call families of fallen service members, later suggesting reporters contact his chief of staff, John Kelly, whose son was killed in Afghanistan, to ask if Obama reached out to him.

Florida Rep. Frederica Wilson, D-Florida, made the stunning claim Tuesday night, saying she was present when the call took place. Sgt. La David Johnson was among the four US soldiers killed by enemy fire in an October 4 ambush in Niger.

"I have proof, too: this man is a sick man," Wilson said Wednesday morning on CNN's "New Day," responding to Trump's tweet. She added that Johnson's widow "broke down" after her call with Trump, saying the President "didn't even know his name."

"I have no reason to lie (to) the President of the United States with a dead soldier in my community. I have no time, I have no motive," she told CNN's Alisyn Camerota on "New Day," noting that she was Johnson's principal in elementary school.

I still stand by my account of the call b/t @realDonaldTrump and Myeshia Johnson. That is her name, Mr. Trump. Not "the woman" or "the wife"

Wilson described herself as "livid" when she heard the call on speakerphone, but when she tried to get the phone to talk to Trump herself, a master sergeant who was present prevented her from doing so. Per military protocol, the calls from the commander in chief are solely presidential condolence conversations.

Wilson said she was ready to "curse him out" had she had the chance to get on the line. However, Wilson said she wouldn't get into the specifics of what she would have said, adding that she didn't want to "politicize" it.

'I guess it still hurt'

Johnson's body was returned home to the Miami area late Tuesday afternoon, with the plane receiving a water cannon salute as it arrived near the gate.

"Basically, he said, 'Well, I guess he knew what he signed up for, but I guess it still hurt,' " Wilson said to CNN's Don Lemon.

Asked earlier if she was sure the President said that, Wilson told CNN affiliate WPLG: "Yeah, he said that. You know ... that is something that you can say in a conversation, but you shouldn't say that to a grieving widow. Everyone knows when you go to war you could possibly not come back alive, but you don't remind a grieving widow of that. That is so insensitive. So insensitive."

A White House official said Tuesday: "The President's conversations with the families of American heroes who have made the ultimate sacrifice are private."

CNN was unable to reach the family for comment.

Wilson told WPLG that she hoped the President didn't make similar comments to the ones she heard to the other families of the soldiers killed.

"That is what stood out in everyone's heart," she said. "You don't say that. He is the President of the United States. This is a soldier who gave his life for his country. He is a hero in our minds, in our community's minds. That is an insult to the entire Miami Gardens community, to the entire District 24, to Miami-Dade County and to this nation. And I hope he didn't say that to the other three families."

Trump first publicly addressed the soldiers' deaths in a Rose Garden news conference 12 days after they were killed.

"I felt very, very badly about that," Trump said Monday. "I always feel badly. It is the toughest calls I have to make are the calls where this happens, soldiers are killed."

He then claimed that other commanders in chief hadn't reached out to families of Americans killed in action, saying he'd been told as much by the generals who serve in his administration. On Tuesday, Trump bragged about calling loved ones from all those killed in action during his presidency.

"I really speak for myself. I am not speaking for other people. I don't know what (George W.) Bush did. I don't know what Obama did," Trump said. "I believe his policy was somewhat different than my policy. I can tell you, my policy is I have called every one of them."

Trump told reporters to ask Kelly if he received a call from Obama when his son was killed while serving in Afghanistan in 2010.

"As far as other presidents, I don't know, you could ask Gen. Kelly, did he get a call from Obama? I don't know what Obama's policy was," Trump said during a Fox News Radio interview Tuesday. CNN asked the White House to talk to Kelly about this issue, but they declined to make him available. Kelly also has not responded to a direct request from comment from CNN.

Outrage over Trump's alleged comments to Johnson's widow evoke a similar controversy to his public feud with the family of another fallen American soldier.

During last year's campaign, Khizr and Ghazala Kahn, the parents of Capt. Humayun Khan, who was a Muslim American, criticized him from the stage of the Democratic National Convention. Trump responded by saying the family "viciously attacked" him.

Before Trump's alleged comments on Johnson surfaced, the Khans issued a statement Tuesday accusing Trump of a "lack of empathy" and of "selfish and divisive" conduct that undermined the dignity of the presidency.

"One more time, he has shown us that he is undeserving of the leadership of our great nation," the family's statement said.