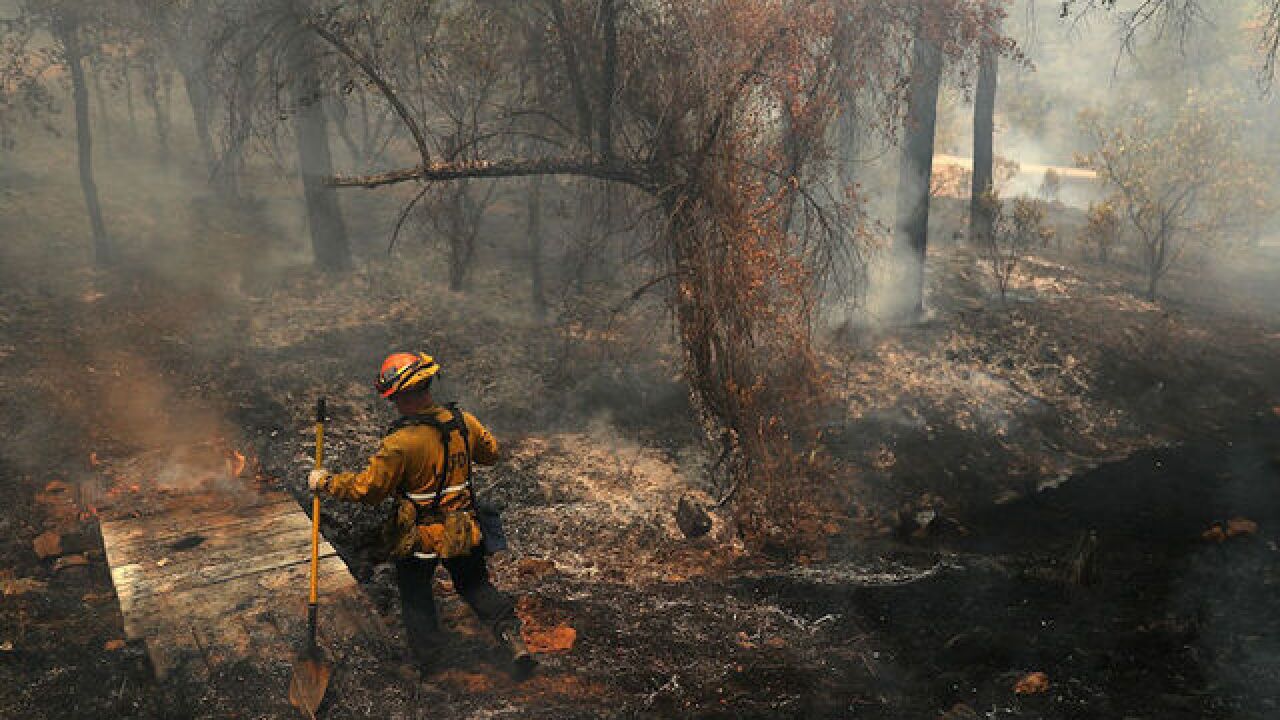 Image copyright 2018 Getty Images. All rights reserved. This material may not be published, broadcast, rewritten, or redistributed.
Justin Sullivan
<p>A Los Angeles city firefighter walks through a charred field as he looks for hot spots after the Carr Fire burned through the area on July 29, 2018 in Redding, California. A Redding firefighter and a bulldozer operator were killed battling the fast moving Carr Fire that has burned over 80,000 acres and destroyed hundreds of homes. </p>

The Carr Fire raging in Northern California is so large and hot that it is actually creating its own localized weather system with variable strong winds, making it difficult for experts to predict which way the blaze will spread.

The fire has claimed six lives, including a firefighter and bulldozer operator working to extinguish the blaze.

Sixteen people had been reported missing, but nine of those have been found safe, according to Shasta County Sheriff Tom Bosenko, who spoke at a Sunday news conference.

The fire, which started a week ago, has burned 98,724 acres and is just 20 percent contained, according to the California Department of Forestry and Fire Protection, known as Cal Fire.

Flames have destroyed at least 966 structures in the area, making it one of the top 10 most destructive wildfires in California history. In fact, 7 of the 12 most destructive fires have happened since 2015.

More than 3,300 fire personnel are battling the flames with more than 330 engines and 17 helicopters, Cal Fire reported.

The fire began July 23 when a vehicle suffered a mechanical failure, officials said. Firefighters had been making progress containing it until Thursday night, when it began to quickly spread.

The National Weather Service also warned that forecast conditions would worsen the situation.

"A dangerous heat wave will continue from California to the Pacific Northwest early this week. Triple-digit heat combined with dry humidity will only exacerbate the ongoing wildfire situation in California," it said on Twitter.

CNN Meteorologist Haley Brink said no rain is in the forecast this week.

"Winds in the area of the fires will be locally gusty, with gusts up to 25 mph. The fires are likely to generate their own winds which could be stronger at times," she said. "Elsewhere across central and southern California the story remains similar. Temperatures will remain 5-10 degrees above average for the region, and dry/drought conditions will continue with little to no rain expected throughout the week."

The erratic flames are blamed for six deaths, including 70-year-old Melody Bledsoe and her great-grandchildren, 4-year-old Emily Roberts and 5-year-old James Roberts.

The three had been missing since Thursday when their house was overcome by flames. Family members confirmed Saturday that they died.

"With a heavy heart we are sad to inform you all that Mel and the great-grandbabies were confirmed to be in the home," the family said on a GoFundMe page.

In those final minutes, unable to get to his wife and their great-grandchildren, Ed Bledsoe was able to get through on the phone.

Bledsoe broke into sobs as he described speaking to his family by phone as he was rushing to try save them.

"He just kept saying 'Grandpa, come and get me," Bledsoe said, referring to 5-year-old James. "'The fire's coming in the back door. C'mon Grandpa.' I said 'I'm right down the road.'"

Another person was found dead after a fire consumed another house, Bosenko said Sunday.

"This fire is scary to us. This is something we haven't seen before in the city," Redding Police Chief Roger Moore told reporters Friday night.

Redding Police Sgt. Todd Cogle said authorities are "finding that there are a lot of communication issues" making it hard to locate residents.

"We spoke with several people who left their cell phones at their residences and in this day and age people don't remember people's phone numbers," Cogle said.

At least two people died fighting the fire, and several others have been hurt.

Stoke, who joined the Redding Fire Department in 2004, was killed while assisting with evacuations, the union said.

A private-hire bulldozer operator, who was not identified, also died Thursday while battling the fire.

Three Marin County firefighters were treated for burns to the ears, hands and face after they encountered a "sudden blast of heat" from burning vegetation. Engineer Scott Pederson and firefighters Tyler Barnes and Brian Cardoza have been released from a hospital, the fire department said Friday in a statement.

A fourth firefighter was being evaluated at the UC Davis Burn Center, the statement said.

'I can't believe it's gone'

The fire forced many residents to gather what they could and escape in just minutes.

"We didn't think the fire was going to come here, so we didn't really take things out like everyone else that was scrambling at the last minute to get out when we saw fire on the ridge," Dominic Galvin said.

A resident of French Gulch, west of Redding, said she had two hours to evacuate, but some people had only 30 minutes.

"It's terrifying," Rachel Hines told CNN affiliate KRCR. "You're frightened a little bit because you don't know if you're going to come back to your house and the town is going to be different."

Chris Corona went to his parents' home to look for their cat, Jinx. The home was gone, but Jinx was there, safely hiding in a bush on a hillside untouched by the flames that killed all the other vegetation.

Corona wept as he thought of things they lost in the house.

"I can't believe it's gone. All those memories, childhood memories," he said. "Stuff that parents save, like stuff you built as a little kid for your mom. I'm just glad my mom got all the valuable stuff that she wanted out."

Looting has been reported in abandoned residences in Redding, and some arrests have been made, according to Police Chief Moore.

Other fires burning in California

In addition to the Carr Fire, more than a dozen other large wildfires are burning throughout California, stretching resources.

The Cranston Fire near San Bernardino has burned more than 13,130 acres and is 57 percent contained.

A man accused of setting several fires in Riverside County, including the Cranston Fire, was arrested last Wednesday, authorities said.

The Ferguson Fire in Mariposa County has burned 54,481 acres and is 30 percent contained. The fire has prompted the closure of the most iconic areas of Yosemite National Park, which will reopen to all visitors August 3, officials said.

"Hughes was with the Arrowhead [Interagency] Hotshots for four years and will be dearly missed by everyone at the parks," the statement read. "We grieve his loss."