Bill Cosby's star of the Hollywood Walk of Fame vandalized 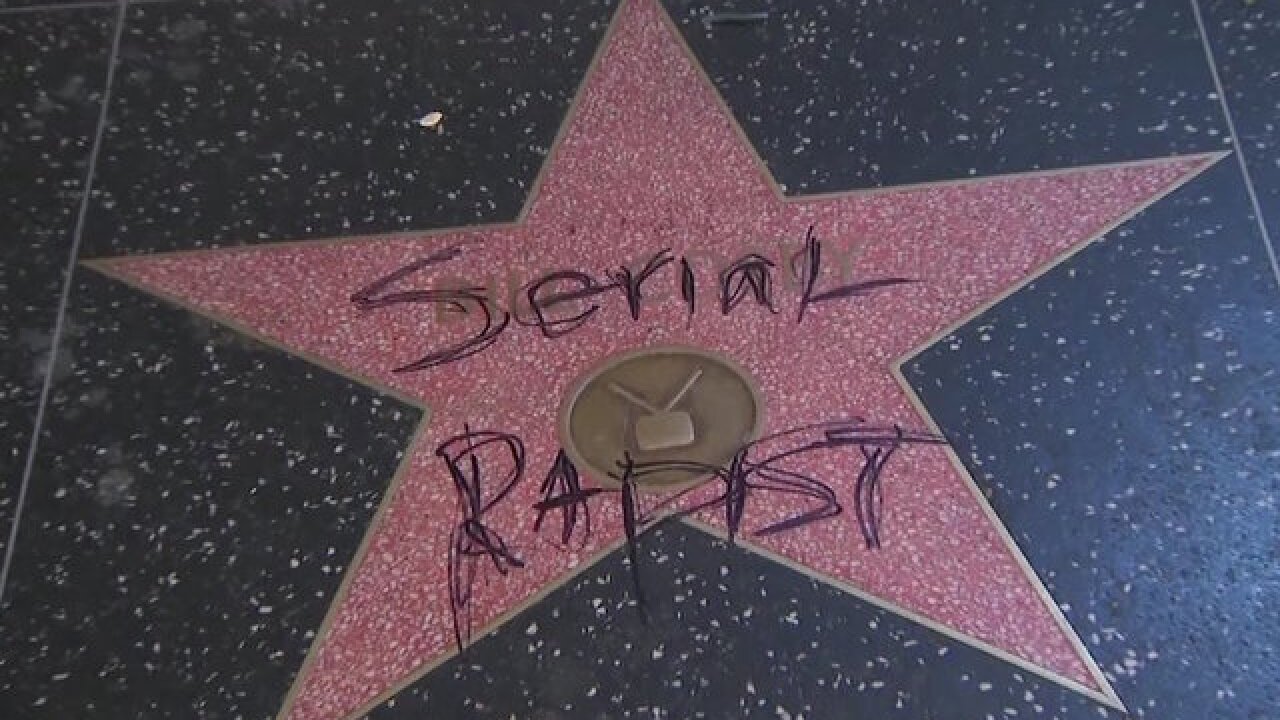 For the second time in four years, Bill Cosby's star on the Hollywood Walk of Fame has been vandalized.

Someone spray-painted the words "Serial Rapist" across the star Monday night, said the Los Angeles Police Department, which is investigating the incident.

Cosby was found guilty in April of sexually assaulting Andrea Constand at his home in 2004. Although Constand's allegations are the only ones that have resulted in criminal charges against the actor-comedian, dozen of other women also have accused Cosby of sexual misconduct.

Someone scrawled a similar message on Cosby's star in 2014, CNN affiliate KTLA reported.

Cosby's star has been cleaned since the incident Monday, but his is not the only one to be targeted on the sidewalks of Hollywood. Here are a few more -- including some that may surprise you.

In July a man smashed President Trump's star to pieces with a pickax.

The former reality TV star's star has been the target of repeated vandalism since Trump's turn to politics. The beleaguered Trump star also has been covered in stickers, splattered with paint and had a tiny wall built around it.

A Superman impersonator told CNN in 2016 he once saw a visitor allow his dog to relieve himself on the star.

This star actually honors a talk-radio host named Michael Jackson, not the late King of Pop, who has his own star with a symbol of a record. This star was spray-painted red in June, and it's not clear whether the vandals knew the difference. Either way, the pop star's daughter Paris Jackson shared a photo of herself scrubbing the star clean on Instagram, saying, "some people have no f***ing respect."

In 2015, the "Modern Family" actress' star was desecrated a month after it was installed. Protesters painted the words "Embryo Defense," an apparent reference to a legal dispute between Vergara and her ex-fiance over whether she might destroy two frozen embryos from their relationship.

In late 2017, the star of the late reggae icon was damaged by someone with a hammer.

"Why would anyone do this to Bob Marley's star? Help me understand," said Hollywood Walk of Fame producer Ana Martinez, speaking for music fans everywhere. She called the act "disrespectful."

In 2013, three days before what would have been his 73rd birthday, Lennon's star was defaced with several scrawled messages. Although none appeared to be negative, a Beatles fan club member called the doodlers "pigs" on Facebook.

In the days after the Playboy founder's death in September 2017, a fan tried to pay tribute by scribbling "R.I.P" and a blue crown on Hef's star. Because the vandal used an oil-like crayon instead of spray paint, the graffiti was easily cleaned up.

The stars are not cheap to replace

There are now more than 2,600 celebrities' stars embedded in sidewalks across a 15-block stretch of downtown Hollywood.

Whoever nominates a celebrity for a star usually pays the $40,000 cost of installing and maintaining the terrazzo and brass landmarks.

Keeping them clean and intact is not an easy task, which is why the Hollywood Chamber of Commerce -- which oversees the Walk of Fame -- has installed surveillance cameras in the hopes of deterring vandals.

"The Hollywood Walk of Fame is an institution celebrating the positive contributions of inductees. When people are angry with one of our honorees, we would hope that they would project their anger in more positive ways than to vandalize a California State landmark," said the Chamber in a new statement.