As Florence batters Carolina coast, it is downgraded to category 1 hurricane 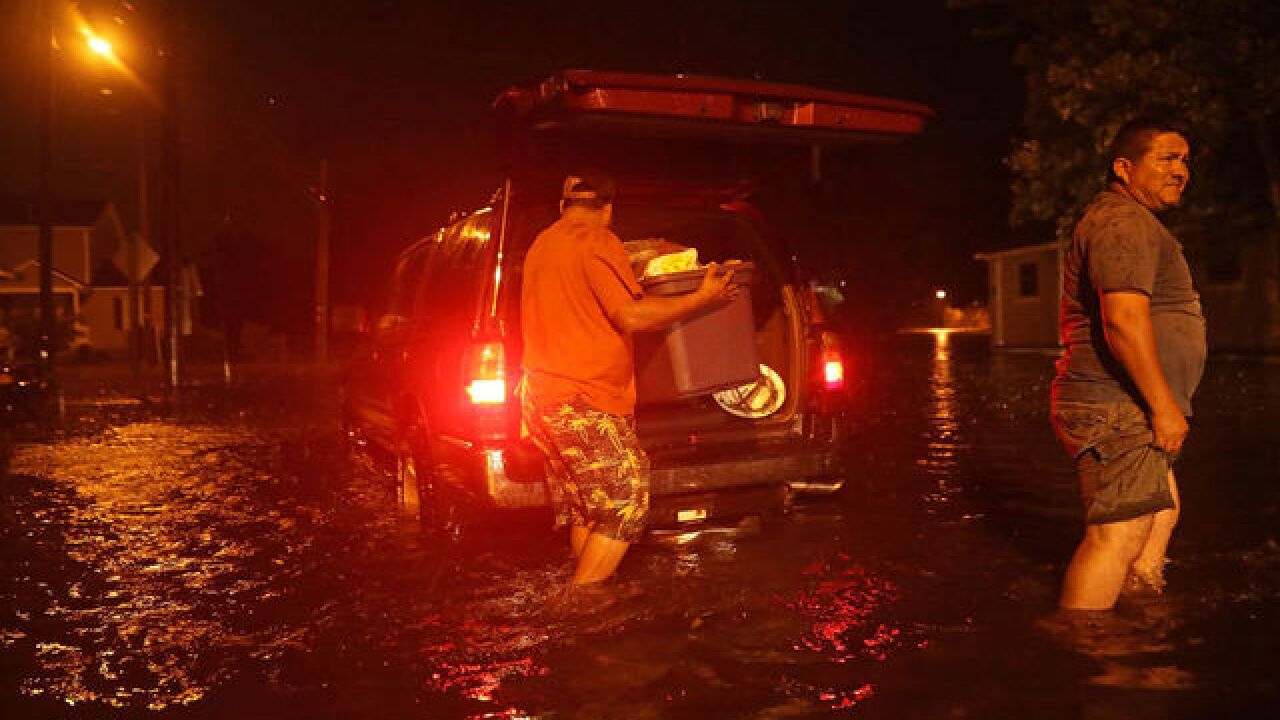 Copyright Getty Images
Chip Somodevilla
<p>NEW BERN, NC - SEPTEMBER 13: Men pack their belongings after evacuating their house after the Neuse River went over its banks and flooded their street during Hurricane Florence September 13, 2018 in New Bern, North Carolina. Some parts of New Bern could be flooded with a possible 9-foot storm surge as the Category 2 hurricane approaches the United States. (Photo by Chip Somodevilla/Getty Images)</p>

The Category 1 storm's outer bands lashed towns on the barrier islands and on some of the Tar Heel State's rivers, as the center of the cyclone moved to make a probable Friday landfall.

In Morehead City, the rain and surf pounded the shoreline and took aim at the few boats still in the water. In New Bern, on the Neuse River, a CNN team had to keep shifting position in a park as the water kept rising until it was too dangerous to stay in the area.

PHOTOS: FLOOD WATERS RISE IN NORTH CAROLINA AHEAD OF FLORENCE

A weather station in Atlantic Beach recorded a total of 12.73 inches for a 24-hour period.

Farther south, in Carolina Beach, the northern end of the town was being swamped as water crashed over the dunes.

Some areas also saw the first of the hurricane-force winds. At Cape Lookout there were sustained winds of 83 mph and gusts of 106.

"With this storm, it's a (Category 1) but the storm surge and the flooding is going to be that of a category 4," CNN Meteorologist Jennifer Gray said Thursday night.

She said the momentum the storm has generated on its long trip across the Atlantic won't go away just "because the winds decrease a couple miles an hour."

Florence is expected to go move slowly as it approaches North and South Carolina, whipping hurricane-force winds and dumping relentless rain at least through Saturday.

"It's not going to take much in a lot of these areas to saturate the soil, so trees are going to come down really easily" and knock down power lines, said Ken Graham, director of the National Hurricane Center.

• Florence is getting closer: As of 11 p.m. ET Thursday, the center of Florence was about 60 miles east-southeast of Wilmington, North Carolina. The storm's forward speed had slowed to 6 mph, and forecasters were concerned it might have stalled.

• When is landfall? Florence's center will approach the North and South Carolina coasts late Thursday and Friday. The actual landfall -- when the center of the eye reaches land -- will be Friday afternoon at the earliest, said Neil Jacobs of the National Oceanic and Atmospheric Administration.

• River rising: A gauge in the Neuse River near the town of Oriental indicated the water was 4 feet over flood stage and more than 5 feet above normal levels.

• Many flights are canceled: More than 1,300 flights along the US East Coast have been canceled through Friday.

Millions either flee or prepare for mayhem

"There is some damage ... but it is still standing strong. There is overwash but nothing we are not used to," she said.

Despite days of warnings to evacuate, some residents are staying put -- even if they don't want to.

Cheryl Browning lives with her husband and son, who has terminal cancer, in Richlands, North Carolina. They also have three dogs and three parrots.

Browning's choice to stay in the hurricane warning zone wasn't easy, she said, but she "could not find anywhere to go."

"Either no (hotel) rooms are available, or we are denied because the breed or size of dogs," she said. "Many that will accept them only allow one per room. And since we have three dogs and three parrots, they're requesting us to purchase two to six rooms."

And there's no way her family could afford that -- or the $1,728 per room another hotel quoted. Other residents have told CNN they're not evacuating because emergency shelters won't accept pets.

"Since my husband retired and my health declined, we have his retirement as an income. He is the only caregiver to me and my son," Browning said. "So since we can't find anything within our means ... we've opted to stay."

Her neighbors gave her the key to their house, which is two stories and might be safer from flooding, she said. It's a kind gesture but doesn't alleviate Browning's fear.

Browning said she had started a GoFundMe campaign in case repairs are needed for the family home.

More than 1 million people have been ordered to evacuate and authorities urged them to get going before the streets become inundated.

In North Carolina, Florence is expected to dump up to 40 inches of rain and storm surge will be high.

"Catastrophic effects will be felt outside the center of the storm due to storm surge," North Carolina Gov. Roy Cooper said Thursday morning. "Tens of thousands of structures are expected to be flooded, and many more by rising rivers and creeks."

His bustling pizza restaurant is one of the few businesses open in the evacuated town.

Why is he open when the town is mostly evacuated? He said he has been through this many times in his 15 years in the Myrtle Beach area and that "nothing is going to happen."

He said he usually doesn't make the pizzas himself, but he was on Thursday because "everybody is scared," including most of his staff.

Officials in several states have declared states of emergency, including in the Carolinas, Georgia, Virginia and Maryland, where coastal areas are still recovering from summer storms.

Florence is one of four named storms in the Atlantic. Tropical Storm Isaac is forecast to approach the Lesser Antilles Islands on Thursday. Hurricane Helene is veering toward Ireland and Great Britain. And newly formed Subtropical Storm Joyce is not expected to threaten land soon.