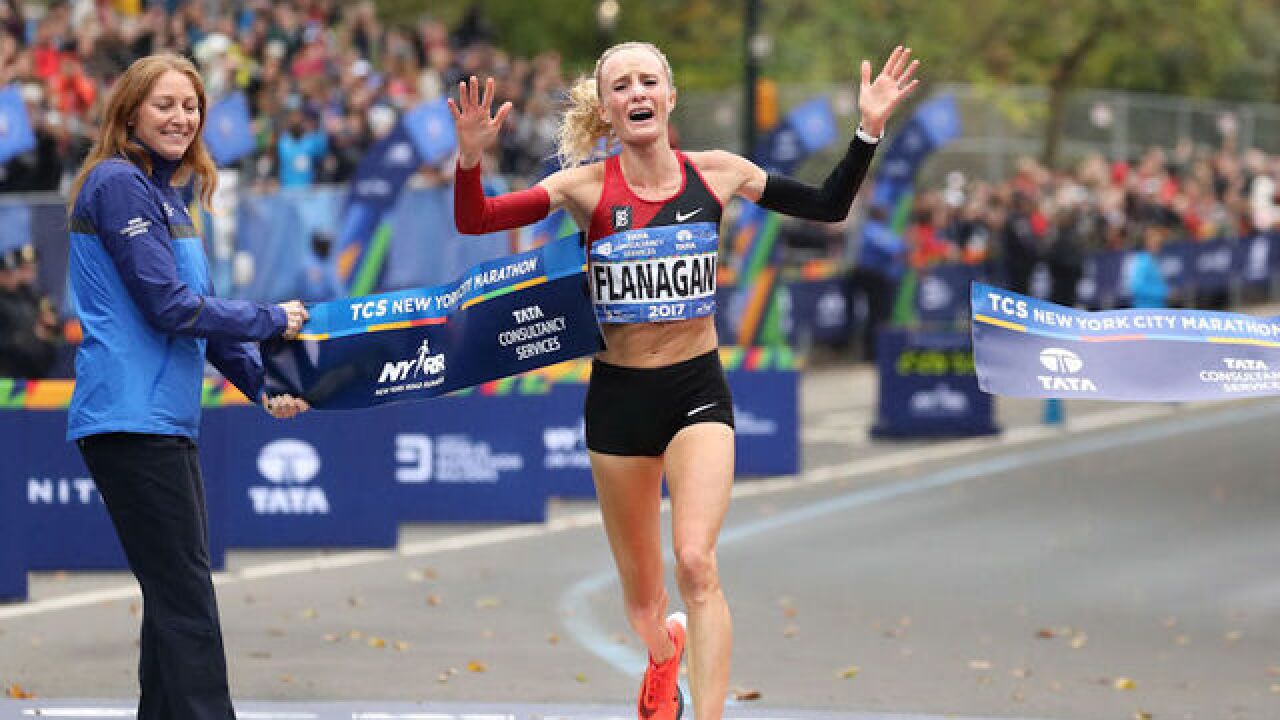 It's been a long time running -- four decades to be exact -- since an American woman broke the finish line tape at the New York City Marathon, but Olympic medalist Shalane Flanagan did just that on Sunday.

With an unofficial time of 2 hours, 26 minutes and 53 seconds, the 36-year-old Flanagan beat three-time defending champion Mary Keitany of Kenya by a minute and one second. Times won't be official until later this month.

Flanagan crossed the finish line in tears before proudly holding the Stars and Stripes aloft. She smiled for the crowd as she wrapped herself in the American flag.

She called the moment "indescribable," according to CNN affiliate WABC, and wept again on the podium as her name was announced.

"It's a moment I'm trying to soak up and savor," she said, according to the station. "This is the moment I've dreamed of since I was a little girl."

It was the first time an American took the women's title since 1977 when Japanese-American Miki Gorman won her second consecutive NYC Marathon with a time of 2 hours, 43 minutes and 10 seconds. Gorman was 42 at the time. (The last American man to win the race was Meb Keflezighi, in 2009.)

The race was held amid heightened security after a terror attack that killed eight people on a popular bike path in Manhattan last week.

A Marblehead, Massachusetts, native who now calls Portland, Oregon, home, Flanagan will doubtless have to find room in her trophy cabinet for her latest honors.

She holds the American records for the 3,000-meter indoor and 5,000-meter indoor races. Flanagan also took bronze in the 10,000-meter contest at the 2008 Olympics, but in March, the International Association of Athletics Federations ruled that the silver medalist, Turkey's Elvan Abeylegesse, was being sanctioned for a positive doping case and was disqualified for a two-year period that included the Beijing Games, making Flanagan's the second-fastest time.

As a student at the University of North Carolina, Flanagan also snared the school's first individual cross-country title in 2002, a feat she repeated in 2003.

Flanagan made her debut at the NYC Marathon in 2010, finishing second with a time of 2 hours, 28 minutes and 40 seconds -- at the time, the best finish by an American woman in 20 years. Before this year, she hadn't competed in the race since 2010.

On the men's side, Kenyan Geoffrey Kamworor beat out countryman and 2014 winner Wilson Kipsang for his first major marathon victory, with a time of 2 hours, 10 minutes and 53 seconds.

In the wheelchair event, the Swiss dominated with Manuela Schar tops among women and Marcel Hug finishing first among the men.