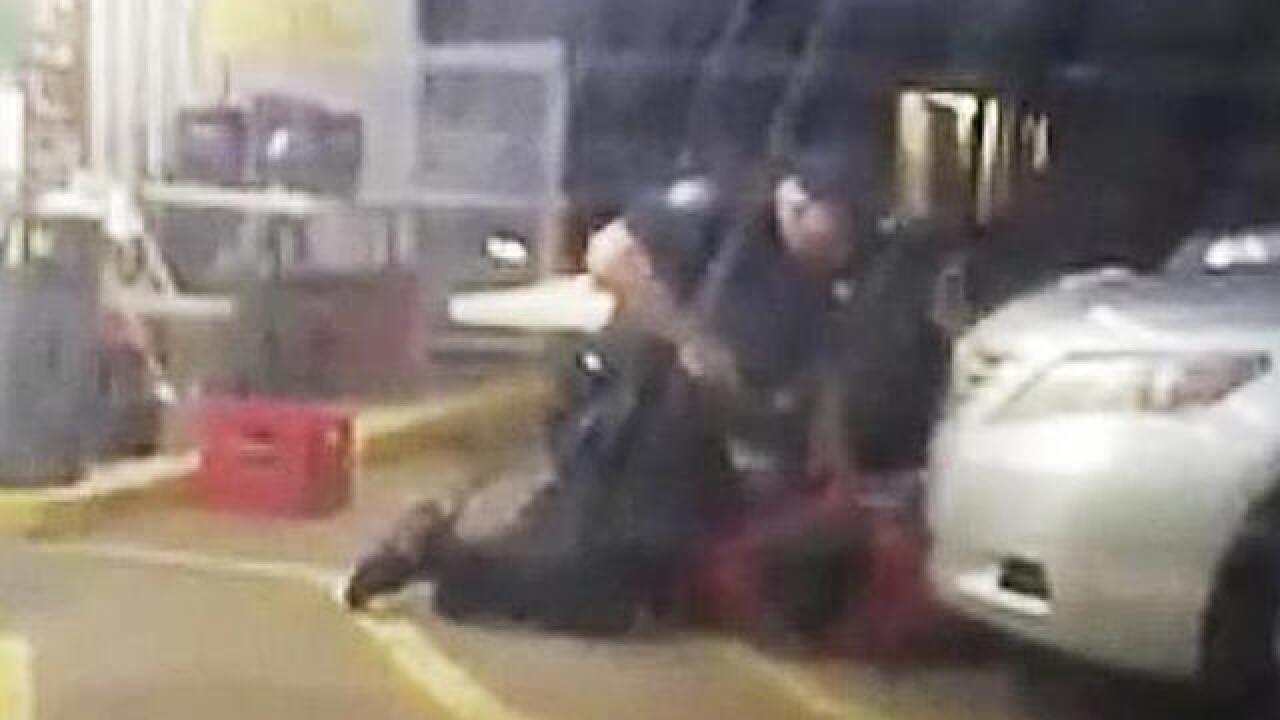 <p><span style="color: rgb(51, 51, 51); font-family: Verdana, Helvetica, Arial, sans-serif, Geneva; font-size: 11px; line-height: 15px;">In this Tuesday, July 5, 2016 photo made from video, Alton Sterling is held by two Baton Rouge police officers, with one holding a hand gun, outside a convenience store in Baton Rouge, La. Moments later, one of the officers shot and killed Sterling, a black man who had been selling CDs outside the store, while he was on the ground. (Arthur Reed via AP)</span></p>

Tuesday’s police shooting of Alton Sterling in Baton Rogue, Louisiana has once again heightened tensions among African-Americans and law enforcement officials across the country. Sterling’s shooting, which was caught on video by eye-witnesses, is just the latest in a series of deaths of young African-Americans at the hands of police that have garnered the attention of the country.

Celebrities took to social media on Wednesday and Thursday to share their opinions, thoughts and prayers after Sterling’s death.

Warning: Some of the posts embedded below contain strong language and disturbing images.

Perhaps the strongest words came from 49ers quarterback Colin Kaepernick, who shared an Instagram video of the Sterling shooting and compared it to a modern-day lynching.

This is what lynchings look like in 2016! Another murder in the streets because the color of a man's skin, at the hands of the people who they say will protect us. When will they be held accountable? or did he fear for his life as he executed this man?

A video posted by colin kaepernick (@kaepernick7) on

A number of prominent rappers and other members of the hip hop community also took to social media sites to voice their outrage.

All we gone do is repost it & type "SMH" over & over again huh ?? Then we gone put #JusticeForAltonSterling & #BlackLivesMatter hashtags on Instagram & pretend that's us taking action huh ??? What happened to the generation of people who stood together, held hands & took to the streets peacefully or violently if it had to come to that & wouldn't move or be detoured from that stance until real results were handed over to us ?!?!? Huh ??? WTF is wrong with us these days that we will sit here & watch a video of yet another innocent man shot & killed in cold blood by police officers in this country ?!?!? WTF is wrong with ME, YOU & everyone else who will watch the video & read this caption & DO NOTHING until it happens again... Then what we gone do ?? The same shit we been doing... Hashtag #JUSTICEFOR[insert name here__________] & #BLACKLIVESMATTER when it really seems that they don't at all... & if #BLACKLIVES don't even matter to #BLACKPEOPLE why the fuck would they matter to anyone else ?!?!?!? What on earth is wrong with US ?!?!?!? But lemme stop so we can get back to turning up, dab'n & hittin "them folks" while this man lay dead in a county morgue for selling some fucking CD's & asking what he was being detained for ?!!?!?!?!? NAW, fuck this....... WE AINT HAVIN THIS SHIT NO MORE !!!!!!!!!!! #THETIMETOFIGHTBACKISNOW !!!!! #MartinLutherKing got shot on a fuckin balcony because he wasn't scared to stand up for our parents, grandparents & US.... The reason our black asses can even do 1/2 the shit we do is because that man sacrificed his life along with many others so we could..... & we ain't even got enough heart to stand together as a RACE & pay them back !!!! #IMNOTSCARED #FAKECARINGASSGENERATION #WHOELSEOUTTHEREGONEFAKECARE ??? #WEAINTGONEDOSHITBUTREPOSTANDHASHTAG #SCARYASSRACE #AMERICAREMOVED

A video posted by The Game (@losangelesconfidential) on

It saddens me that 5 kids are growing up without their father. 2 white Police Officers killed Alton Sterling while he was standing outside a store selling CD's. These officers got a call that a man was outside the store with a gun but for some reason the officers were wearing Body Cam's that weren't connected & recording. Wrestled him down to the ground with no warrant to do so & shot him in the chest & back!! When is America & the judicial system that's suppose to protect us, gonna make these officers who are killing black men take responsibility for what's going on. This is literally getting away with MURDER & it continues to happen #RipAltonSterling

A photo posted by Fabolous (@myfabolouslife) on

Executed this man about selling bootleg DVDs! Smh it's only gone get worst! They don't care about us!

A video posted by Meek Mill (@meekmill) on

Celebrities of all races and genders also showed their support for Sterling and his family.

So much Brutality in the world. We don't have all the info but looks like a cold blooded killing. UNACCEPTABLE!!!! https://t.co/G8QRDbti48

He had a right to sell CDs, and a right to due process, but he he was shot for being a black man. Don't rationalize murder. #AltonSterling

How many more times must this happen for us to matter? How many more must we lose?
BLACK. LIVES. MATTER. #AltonSterling