5 things to watch at the Sally Yates hearing 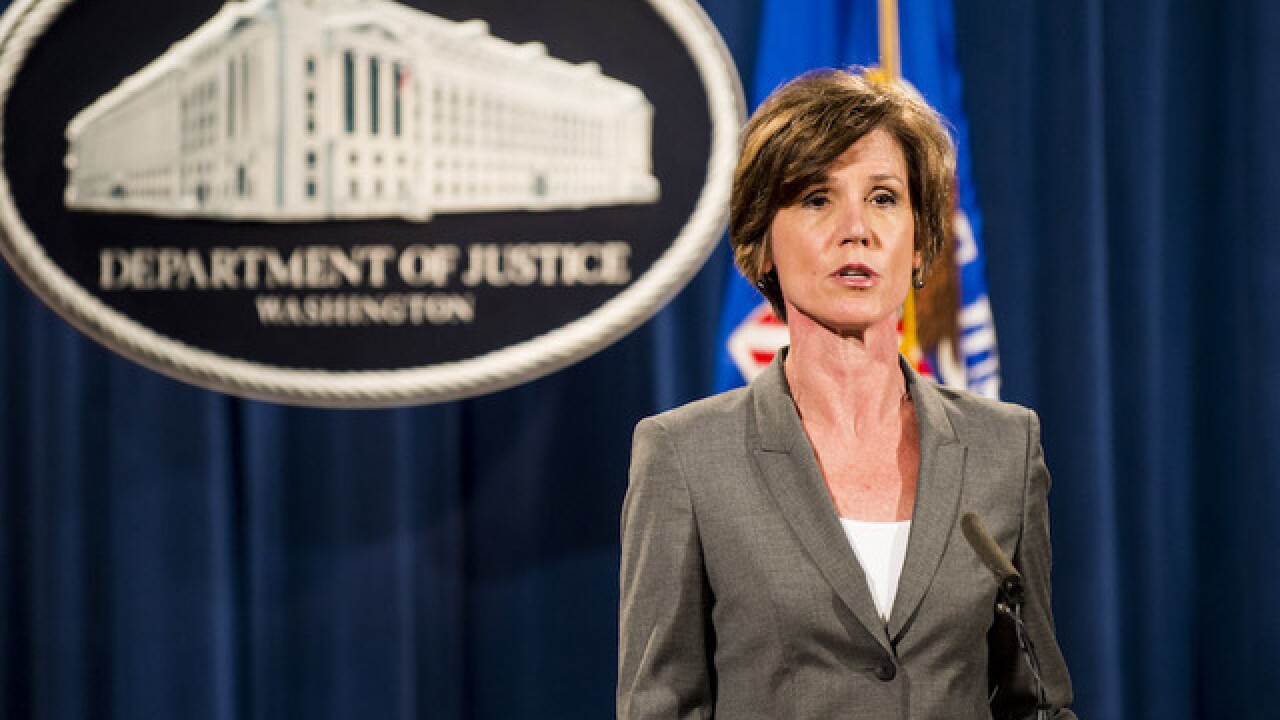 Copyright Getty Images
Pete Marovich
<p>WASHINGTON, DC - JUNE 28: Deputy Attorney General Sally Q. Yates speaks during a press conference at the Department of Justice on June 28, 2016 in Washington, DC. Volkswagen has agreed to nearly $15 billion in a settlement over emissions cheating on its diesel vehicles. (Photo by Pete Marovich/Getty Images)</p>

Yates was thrust into the national spotlight after she broke with President Donald Trump over the enforcement of his travel ban, an action which led to her firing in January. But since then, her profile has only risen following revelations that she said she forcefully warned the administration about former national security adviser Michael Flynn's communications with a Russian diplomat weeks before Flynn was fired.

Here are five things to watch in Yates' testimony before the Senate Judiciary Subcommittee on Crime and Terrorism, which is scheduled to start at 2:30 p.m. ET on Capitol Hill.

1. What was the extent of Yates' warning?

Yates told White House staff and other top officials that Flynn could be a security risk after he discussed Russia sanctions with Russian ambassador to the US Sergey Kislyak, CNN reported last week. That testimony is expected to contradict the White House's description of her warning, framed by press secretary Sean Spicer as "a 'heads-up' to us on some comments that may have seemed in conflict with what he (Flynn) had sent the vice president."

But did Yates discuss more with the Trump administration? Were other interactions uncovered? Did she find additional information on other top Trump aides at the center of the Russia probes?

Her testimony comes after weekend reports in The Washington Post and CNN that a former US official said Trump's transition team warned Flynn about the risks of communicating with Kislyak weeks before he did.

Flynn stepped down from his position as national security adviser after reports surfaced that the Justice Department warned the Trump administration that Flynn misled administration officials regarding his communications with the Russian ambassador and was potentially vulnerable to blackmail by the Russians.

2. How limited will Yates be?

Democrats have pinned a lot of hopes on Yates, privately promising blockbuster testimony from the former Obama administration official. But a key question is how much she will be limited in public, either through questions regarding classified material, promises of attorney-client privilege or claims of executive privilege from either Trump or former President Barack Obama.

Yates' first public hearing was scheduled for six weeks ago, but it was canceled at the last minute by Trump ally and House intelligence committee Chairman Devin Nunes. Reports later emerged that the White House blocked her testimony, which press secretary Spicer vehemently denied.

Monday's hearing comes a week after FBI Director James Comey spoke to the full Judiciary Committee as well as House investigators. Comey, too, was limited in what he could say, citing an active investigation. As senators tried to pry any bit of information out of him, Comey beat back questions about the continuing federal probe into Russian interference in the US elections, and he likewise revealed few new details to the House intelligence committee.

3. Did Yates' warning make it all the way to Trump?

We know now that Yates alerted White House counsel Don McGahn to Flynn's phone calls with Kislyak. Flynn's misleading comments, Yates said, made him potentially vulnerable to being compromised by Russia, according to sources familiar with her version of events. She expressed "serious concerns" to McGahn, making it clear -- without making a recommendation -- that Flynn could be fired.

What happened next isn't clear. After that meeting, the White House took three weeks to fire Flynn, which happened in February. But did McGahn ever tell Trump about Yates' warning?

4. Will there be anything left for House investigators?

The House intelligence committee was supposed to get the first crack at Yates in public, on March 28. But that hearing got swept up in the fiasco surrounding Nunes' clandestine White House trip and later led to him stepping aside from leading his panel's investigation.

It took a month for House investigators to even settle on inviting Yates back for a new hearing, but by that point Graham had already booked her for his investigation with the Senate Judiciary subcommittee. As of last Friday, House investigators still had not settled on a date for her new hearing or if there will be one at all.

5. It's not just Sally Yates testifying

Former Director of National Intelligence James Clapper is also set to testify. Look for questions about why his earlier assessment of Russian interference in the election contradicted the well-established version now, which is that not only was Russian interference omnipresent, but it was also designed specifically to help Trump.

Republican lawmakers have periodically brought this up over the last few months. Now will be their chance to hear directly from Clapper about whether his previous belief still stands.