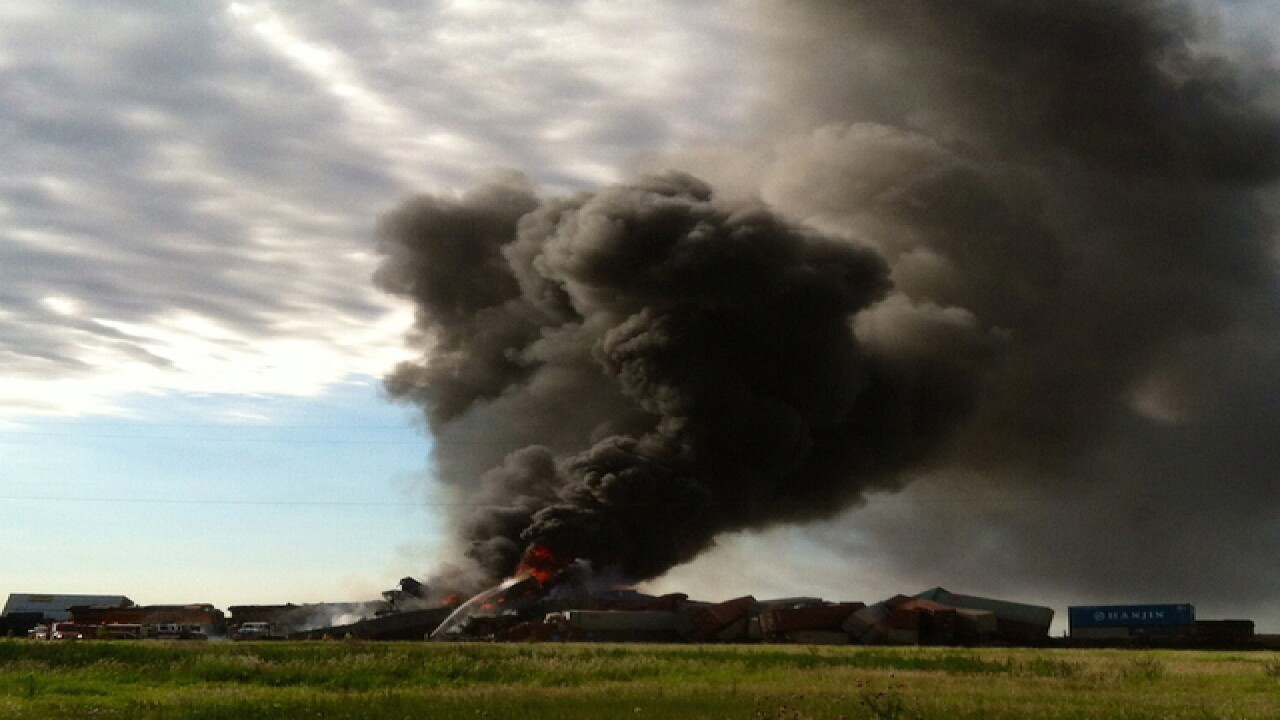 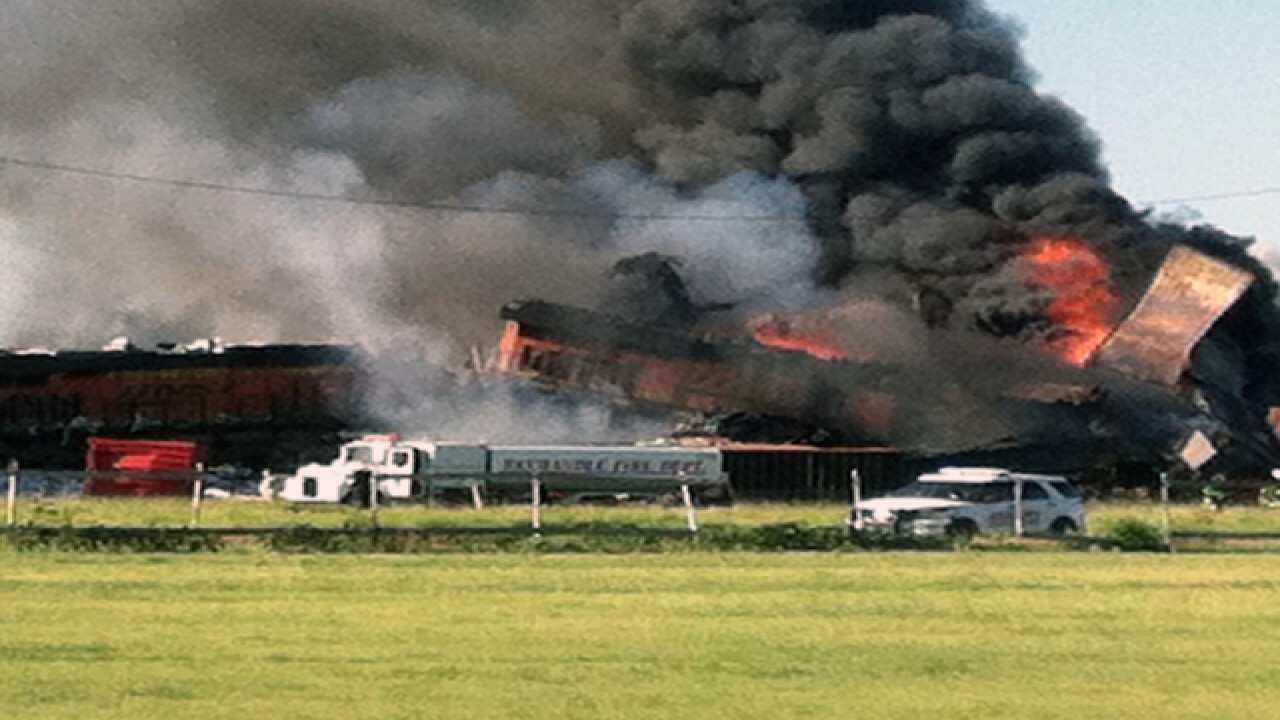 By: Associated Press
Posted at 8:20 AM, Jun 28, 2016
DALLAS (AP) — Three crew members were missing and one was hurt Tuesday after a head-on train collision in the Texas Panhandle that caused several box cars to erupt in flames and led authorities to evacuate residents in the area.
The two BNSF Railway freight trains were on the same track when they collided near the town of Panhandle, about 25 miles northeast of Amarillo. Each train carried two crew members; one man jumped before the collision, according to BNSF spokesman Joe Faust.
That man was in stable condition at an Amarillo hospital with injuries that were not life-threatening, said Sgt. Dan Buesing of the Texas Department of Public Safety. His identity wasn't available. Because the fire was still burning Tuesday night, crews had not been able to search the wreckage for the three missing crew members, Buesing said, adding that crews are still pouring water on the fire.
Freight cars and containers were derailed and strewn for about 400 yards from the collision site, Buesing said. As nightfall approached, floodlights were being brought in as efforts to quell the flames and search for the missing crew members was expected to continue well into the night, he said.
It's not clear how fast the trains were traveling when they collided, but the speed limit in that area is 70 mph, Faust said. It also wasn't clear why the trains were on the same track. The rail cars were holding a variety of consumer goods, Faust said.
"I don't know how anyone survived," said Billy Brown, a farmer in the area who saw a fireball after the collision. "It's terrible. I've seen a number of train wrecks but I've never seen one like this."
National Transportation Safety Board spokesman Keith Holloway said the NTSB has opened an investigation, and the Federal Railroad Administration said it has investigators on site.
BNSF has pledged to meet a 2018 federal deadline to adopt technology, called positive train control or PTC, that relies on GPS, wireless radio and computers to monitor train positions and automatically slow or stop trains that are in danger of colliding, derailing due to excessive speed or about to enter track where crews are working or that is otherwise off limits. At least three freight railroads have said they'll need an extension to 2020.
Faust said in a statement later Tuesday that the West Texas collision is the type of accident PTC can prevent and that BNSF is "aggressively" pursuing it "across our network."
"While sections of the track operated by the eastbound train involved in this accident have PTC installed and are being tested, the section of track where the incident occurred will be installed later this year," he said in the statement.
It's not unusual to have an accident in the Panhandle involving a truck that's struck by a freight train, Buesing said, but the magnitude of Tuesday's accident was startling.
Officials in Panhandle ordered an evacuation of some nearby areas out of concern the flames would cause a fast-moving grass fire, the Amarillo Globe-News reported, but Buesing said that residents later returned to their homes and were told to shelter in place and monitor wind conditions. Officials also asked residents to curtail water use because the water supply is being depleted by firefighters at the scene, according to KVII-TV in Amarillo.
Tuesday's accident is at least the second in recent years involving BNSF trains striking one another. In September 2013, three were involved in a wreck near Amarillo that injured five crew members, according to an NTSB report. The federal agency in that incident faulted the crew in one train for improperly proceeding past a signal and striking the rear of a stationary train, and cars that derailed were then struck by a train passing in the opposite direction.
Copyright 2016 The Associated Press. All rights reserved. This material may not be published, broadcast, rewritten or redistributed.