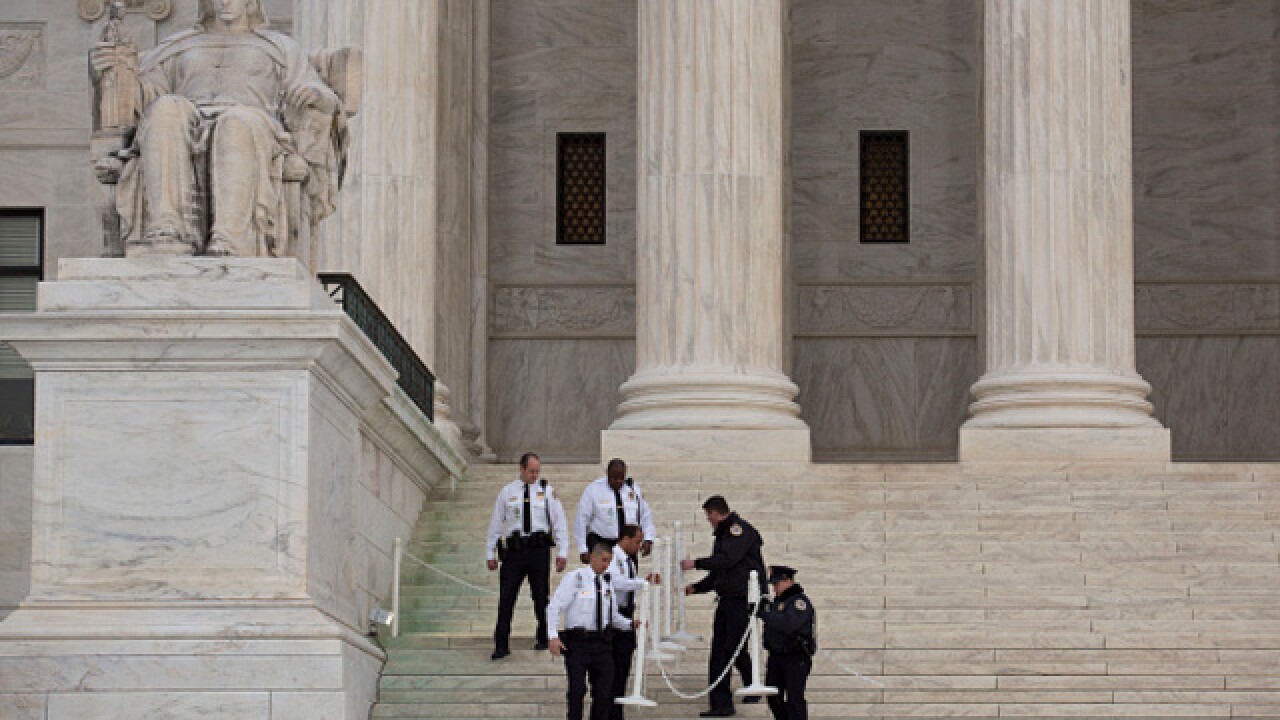 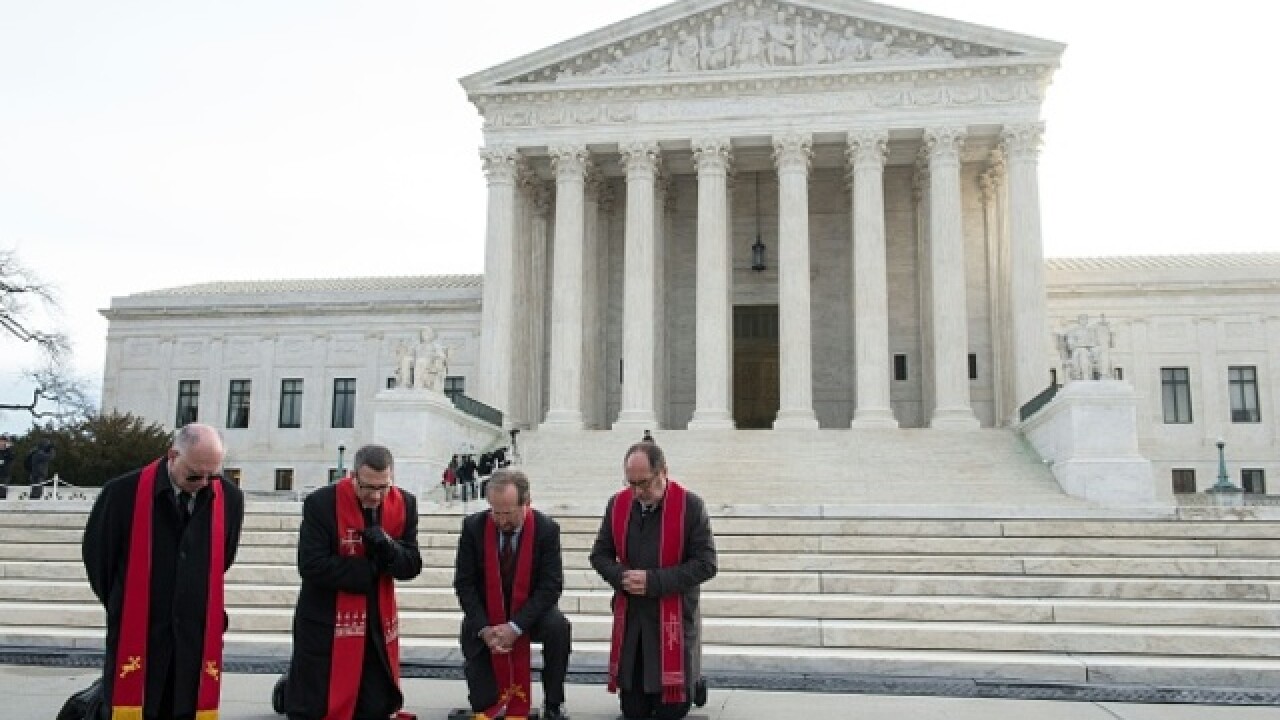 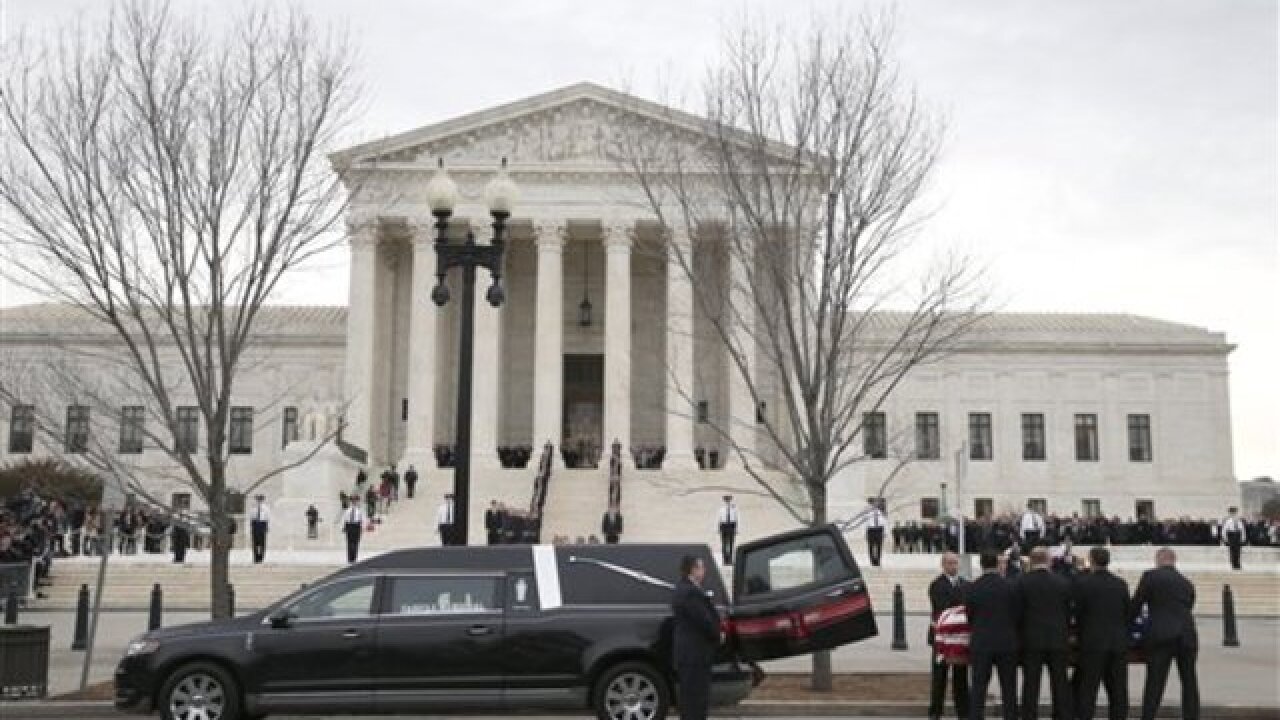 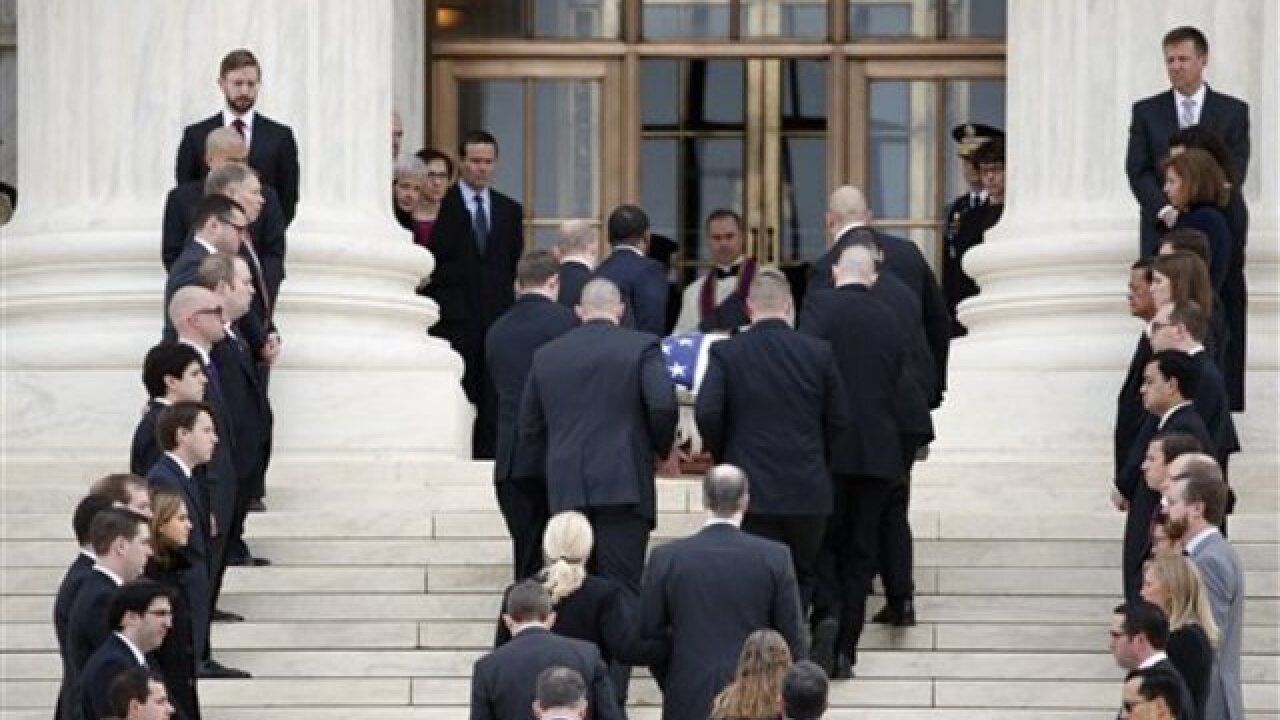 WASHINGTON -- Justice Antonin Scalia's flag-draped casket was carried up the marble steps of the Supreme Court Friday in a somber procession that began a day of ceremony and tribute to one of the court's most influential members.
Scalia's eight Supreme Court colleagues, his family and nearly 100 former law clerks watched solemnly as Supreme Court police placed the casket on a funeral bier first used after President Abraham Lincoln's assassination.
The Rev. Paul Scalia, the justice's son and a Catholic priest, said traditional prayers. "You have called your servant Antonin out of this world," he said. "May he rest in peace."
A 2007 portrait of Scalia by artist Nelson Shanks was displayed nearby. In it, the justice is shown surrounded by images representing important moments and influences in his life, including a framed wedding photograph of his wife, Maureen. She, their nine children and three dozen grandchildren were present.
Before Scalia's body arrived, his former clerks formed two lines down the court steps and across its marble plaza. A few wiped away tears after the casket arrived. The clerks will take turns standing vigil by their former boss throughout the day and night in a tradition most recently observed after the 2005 death of former Chief Justice William Rehnquist.
After a private ceremony for family, friends and justices, Scalia's casket was to be on public view from 10:30 a.m. until 8 p.m. Dozens of mourners had already lined up outside the court to pay their respects.
Hannah Moore and Emily Weatherspoon, both 17, were first in line just before 7 a.m. The high school seniors from Raleigh, North Carolina, were visiting Washington as part of an AP government class.
"You can sleep any day. Justice Scalia only dies once," Moore said.
The doors to the court chamber, where Scalia had served for nearly 30 years, were open at the east end of the hall. Black wool crepe hung over the entrance, and Scalia's courtroom chair was draped in black.
President Barack Obama and first lady Michelle Obama planned to pay respects later Friday, while Vice President Joe Biden and his wife Jill Biden were to attend Scalia's funeral Mass on Saturday.
The Mass open to family and friends will take place Saturday at 11 a.m. at the Basilica of the National Shrine of the Immaculate Conception in Washington. Burial plans have not been released.
Scalia's sudden death complicated an already tumultuous election year. His death gives Obama a chance to replace the conservative stalwart with a more liberal successor who could tilt the ideological balance of the court for decades to come.
Senate Majority Leader Mitch McConnell and other GOP leaders have said a replacement should not be named until the next president takes office. Obama has pledged to pick a replacement "in due time" and challenged Republicans to hold a vote on his nominee.
Scalia was found dead on Saturday in his room at a remote Texas hunting resort. The 79-year-old jurist was appointed to the court in 1986 by President Ronald Reagan.
___
Associated Press writers Mark Sherman and Jessica Gresko contributed to this report.
Associated Press 2016