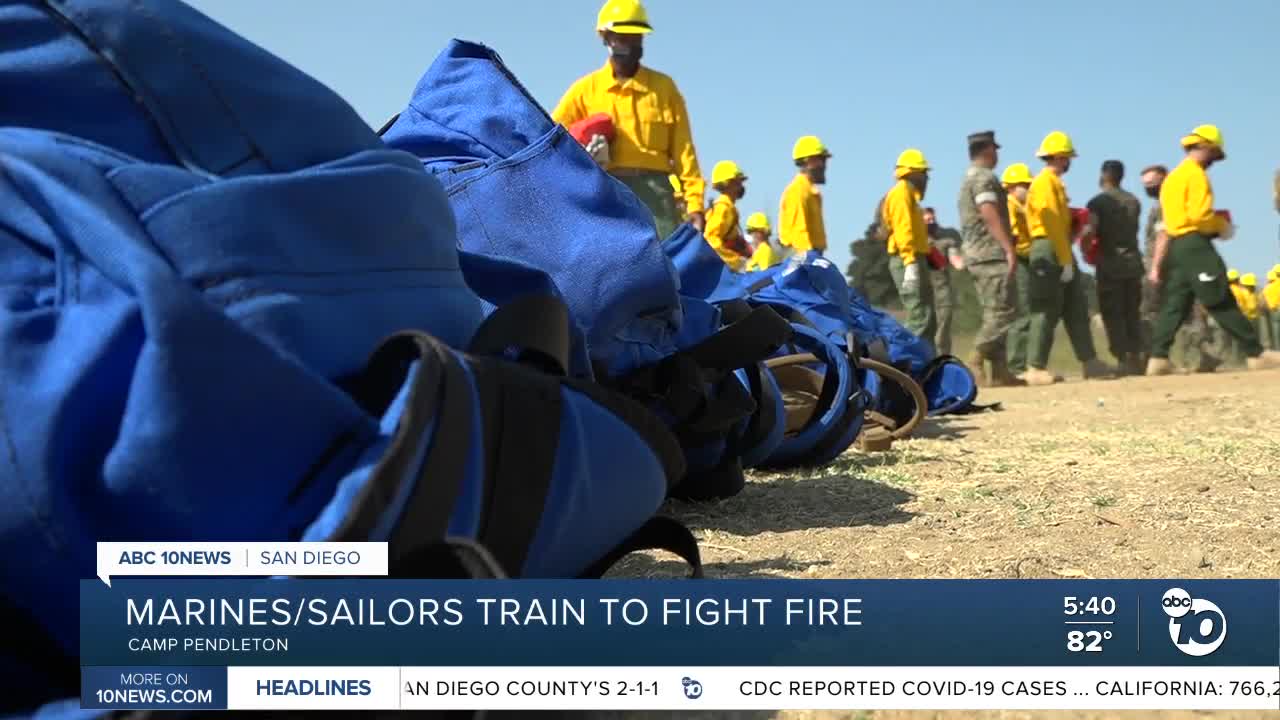 "They're the right people for the job because they're Marines and Sailors," Commanding Officer of the 7th Engineer Support Battalion, Lt. Col. Melina Mesta said. She described the traits Marines and Sailors hold as well as their training that covers responding to practically every kind of disaster.

Two hundred and fifty Marines and Sailors volunteered to train to help firefighters. They deploy Saturday to learn more in the Sierra National Forest. Lt. Col. Mesta said by next week they will be on the fire line.

On base, clumps of a couple dozen Marines in neon yellow shirts and forest green pants learned how to shelter in place if a fire overcomes them. They have a bag about the size of a loaf of bread containing what looks like a plastic tarp.

They shake the tarp and cocoon themselves on the ground, crucial training that could save their life if they're overcome by the blaze.

Military Liason with the U.S. Forest Service Frank Guzman explained why these crews are so vital, "our crews, who start in the southwest maybe, they're just tired and they've been doing this since April and we don't have anyone else to go to."

Guzman said they are already utilizing the National Guard and resources from Canada and Mexico. Marines and Sailors are their last resource.

"Marines haven't been deployed since 1994 but in four out of the last six years we've had the active military deployed, so it's getting more and more common," Guzman said.

More common, but never something San Diegan LCpl. Marissa Urias thought she would do.

"My original plan was to go to college after high school and study Kinesiology and Minor in Nutrition, and then my dad told me my great-grandpa was in the Marine Corps. My dad was also in for four, or five years so then I also had a sense of calling to also join, but I never really envisioned myself going to help out and assist with the fires," LCpl. Urias said.

She admitted she was a little anxious, but she's ready to protect her neighbors.

Lt. Col. Mesta said several of those being deployed have family in the area and they're honored to protect their families and neighbors.

LCpl. Urias is part of the first wave that will come out of Camp Pendleton. They are training another group so they can be ready for the future, whether that is far away or right here in San Diego.

"If the season continues like this there's always that possibility," Guzman said the lack of rain created these dire circumstances.

Currently, 106 large wildfires are burning across the Western U.S., according to the National Interagency Fire Center, and nearly 6.7 million acres burned this year. As of Friday, the Creek Fire had burned 248,256 acres since Sept. 4 and was 20% contained.