A grandmother of five tells 10News, when she moved here 30 years ago - linving in San Diego was "easy." In 2018...it's a different story. On average, 30% of San Diegans are not making enough money to make it here.

SAN DIEGO (KGTV) - California families are feeling the financial burden of living in the Golden State, according to a report issued Wednesday by the United Ways of California.

The report, Struggling to Stay Afloat: The Real Cost Measure in California 2018, weighs the costs of housing, food, healthcare, child care, and transportation to establish a poverty level which it says is not accurately accounted in the government’s official poverty measure.

In San Diego County, 30 percent of households, or 271,821, were below the adjusted poverty level. All but 3 percent of those households had a working adult.

Key findings of the study include:

A breakdown of which California counties are below the Real Cost Measure shows tough economic times for the San Diego region. The western portion of Chula Vista and National City had the highest number of families below the level, at 52 percent. The greater Otay and South Bay areas were at 49 percent. Del Mar, Carlsbad, Encinitas and Rancho Bernardo/Poway had the fewest families in poverty, with percentages in the teens. 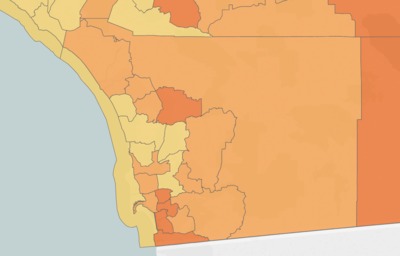 The United Way created solutions for families, including a household budget system. It allows users to select their county, enter the number of people in the household by age to determine the average costs of basic needs.