SAN DIEGO (KGTV) - You’ve heard of tiny houses, but what do you know about micro-apartments? There are significant efforts being made to build new micro-housing units in San Diego.

“It's a budding movement right now in San Diego. I'd say there's a number of developers who are interested,” says San Diego Real Estate Developer David Allen, President of Trestle Development. He and his team are nearly finished building a huge East Village housing project that is filled with very tiny homes.

“They’re about 240 square feet. We have a couple of units that are a little over 300 square feet,” Allen says of Nook East Village.

For comparison, a yoga mat is about 12 square feet and a parking spot is approximately 180 square feet. So, living in roughly 300 square feet might seem impossible, but renderings of the new development show how it works. 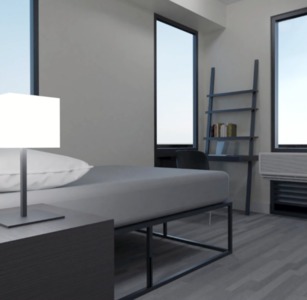 In addition to the main room, there’s a kitchenette, a bathroom with a standup shower and a storage area. It’s only about $1,200 a month. Many people believe that’s a low price to pay in a city that is inundated with sky-high rental prices. For some individuals, this is an option that beats having to live with roommates.

RELATED: How much money does it take to be 'wealthy' in San Diego?

There’s a catch. Nook East Village has 91 micro-units, but there are only eight parking spots and one of those spots is a dedicated car share for tenants. Allen tells us that people who are interested in micro-living to save money aren't bothered by the lack of parking. “Typically, those people are less likely to have cars,” he adds.

Parking has been the biggest roadblock in putting up micro-apartments in San Diego. The city municipal code requires that apartments have at least one space for every unit. Affordable housing developments are the exception to that rule. They don’t have parking space requirements. Allen’s East Village development falls into that category. It’s restricted to tenants who make no more than about $54,500 a year.

“Councilmember Gómez is working with the Planning Department and several SRO/Micro-Unit Developers to better define SRO/Micro-Units in the municipal code, look to expand the zoning where SROs are allowed, and ease the parking requirements. It is our hope to have something come to the Smart Growth & Land Use Committee by early 2019.”

Nook East Village plans to open by the end of October. It’s taking leasing applications next month. It also has eight units set aside for veterans who have been experiencing homelessness.