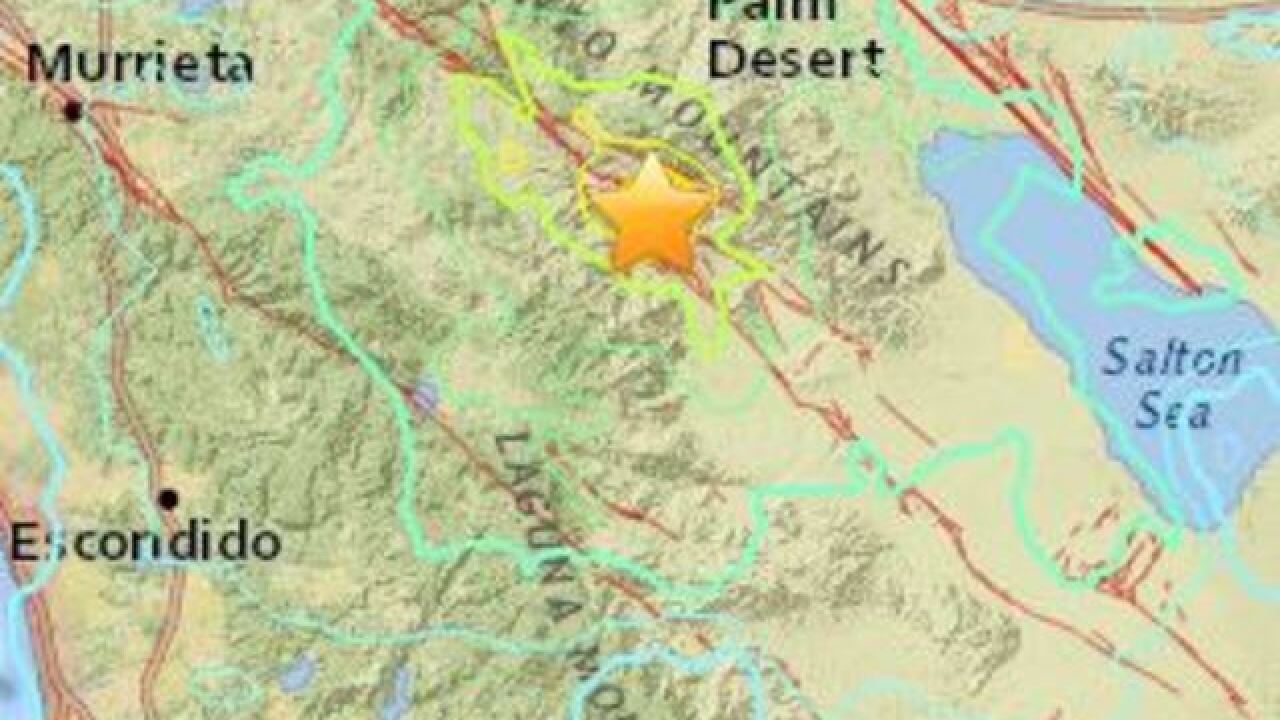 By: 10News Digital Team, City News Service
Posted at 2:26 AM, Jun 10, 2016
SAN DIEGO -- A strong and very shallow earthquake struck Friday morning in Anza Borrego Desert State Park in northern San Diego County, the U.S. Geological Survey reported.
The temblor struck at 1:04 a.m. at a depth of approximately 7.64 miles with a magnitude of 5.2, according to a computer-generated report from the USGS. A quake of such strength is capable of generating considerable damage.
There were at least eight aftershocks in the same general area within 3 hours and 10 minutes. The strongest were magnitude-3.5 shakers at 1:06 a.m., 1:33 a.m. and 4.14 a.m. -- all at a depth of slightly more than 6 miles.
The quakes did not raise the risk of a tsunami, according to the USGS. There were no reports of significant injuries or damage, San Diego Sheriff's Lt. Andrea Arreola said.

@NWSSanDiego little damage reported in LaQuinta this from a families house I talked with this morning. pic.twitter.com/MaA4FphJLq

5.2 earthquake that occurred near Borrego Springs was along the San Jacinto Fault, the most active in S. CA. @10news pic.twitter.com/0xn4KEZ6im

However, the earthquake did trigger a minor rock slide on Montezuma Valley Road, closing the road at mile marker 13-15 in the Palm Canyon area, a rural area about 14 miles southeast of Borrego Springs. California Highway Patrol and San Diego County crews had cleared the area and reopened the road before 5 a.m.

The quake's epicenter was 13 miles north-northwest of Borrego Springs in San Diego County and 16 miles south-southwest of La Quinta in Riverside County. It was strong enough to be felt in Los Angeles.
A waitress at a Denny’s in Palm Springs described the scene in her restaurant.
“The cook felt it, plates survived… I had one customer dive underneath a booth,” Bonnie said by phone.
A gas station attendant in in Alpine said he clearly felt the ground shake.
“I was standing outside, cleaning pumps,” Clifford told 10News by phone. “All of a sudden, everything started moving and shaking. It was a big one.”
The earthquake occurred along the San Jacinto Fault, historically the most active fault in Southern California, according to seismologist Lucy Jones. It was near a magnitude-6 earthquake in 1937 and a magnitude-5.3 earthquake in 1980, Jones reported.
"We have never seen a San Andreas earthquake triggered by a San Jacinto earthquake," Jones wrote on Twitter, referring to the state's most famous fault.
"These are very potent faults, there are faults that can easily do magnitude 7.5, 7.8 earthquakes,” earthquake expert Dr. Pat Abbott, a professor of geology at San Diego State University, told 10News in an interview Friday morning.
Abbott added there is roughly a 2 to 4 percent chance that this earthquake could trigger something larger.
"We don't look at an earthquake as an event. We look at it as a series of events that takes place over weeks or months. Is this 5.2 the big one in the event, or is this going to turn out to be a trigger for something even larger?
According to the USGS, 3,162 people reported feeling the earthquake in 509 different zip codes across Southern California, and as far north as Santa Barbara and even Fresno.
RELATED STORIES:
Graphic: California's recent earthquake history
Did you feel the quake? Social media reacts
Iconic North Park water tower needs earthquake proofing
Copyright 2016 Scripps Media, Inc. City News Service contributed to this report. All rights reserved. This material may not be published, broadcast, rewritten or redistributed.