What a divided government during Biden's presidency might mean 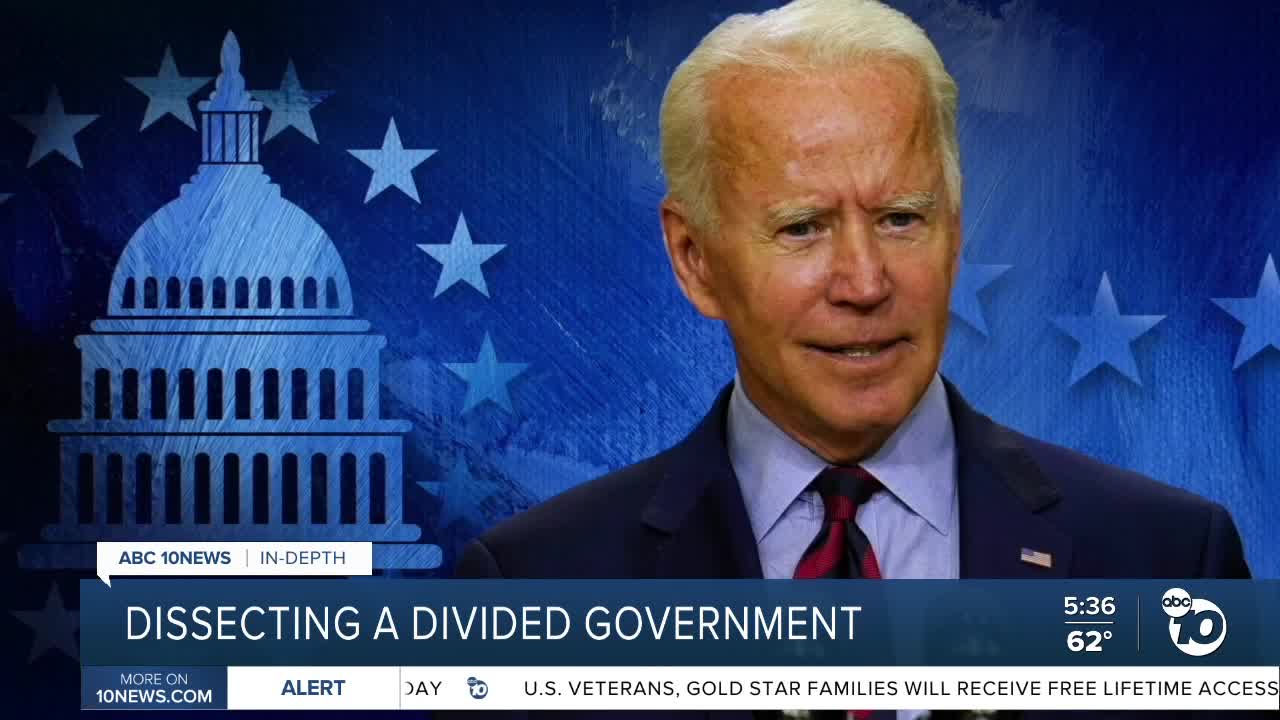 Two Senate runoff elections in Georgia will determine if President-elect Joe Biden and the Democrats have full control of Congress or a divided government.

SAN DIEGO (KGTV) — Two Senate runoff elections in Georgia will determine if President-elect Joe Biden and the Democrats have full control of Congress or a divided government.

Although there has been notable legislation passed in periods of divided government, two political science experts say they expect consensus on only “incremental” legislation in our hyper-partisan era.

Each of the last six commanders-in-chief presided over a period of divided government, where the opposing party controlled one or both chambers in Congress.

“We've seen less productivity come out of those sessions,” said Dr. Stephen Goggin, a political scientist at San Diego State University. “You have to do more of the bargaining type politics that we haven't necessarily seen in recent history.”

Compromise used to be more common. In the early 1980s, the Reagan Administration worked with Democrats in the House to pass tax cuts and banking deregulation along with funding for job training and highway infrastructure.

President George W. Bush, another Republican, worked with a Democratic-controlled Senate during his first two years to pass major bills like the first Bush tax cut, the Help America Vote Act, No Child Left Behind, and the Patriot Act. With the exception of the first tax cut, all of the legislation was passed in the aftermath of the attacks on 9/11.

Those past examples may not be the best predictors of what’s to come in our much more polarized political climate, said Goggin.

Rather than agree to compromise, the parties now tend to be focused on “doing whatever they can to make the other side look bad enough so that they can regain that [majority] electorally the next time around,” he said.

“It's not going to be the big bold platform that Democrats might have been hoping for, but certainly incremental policy change is probably on the table,” said University of San Diego political science professor Dr. Casey Dominguez.

“The decisions about that rest very much with the Republicans in the Senate,” she said.

A lot will hinge on Mitch McConnell if he remains Senate Majority Leader, she said.

“Anything that is going to come through Congress is going to have to be something that Mitch McConnell is willing to hold a vote on,” she said.

McConnell blocked 72 percent of President Barack Obama’s judicial appointments in the last two years of his presidency, leaving 105 spots on the bench vacant. As Senate Majority Leader, McConnell could choose to block most legislation Democrats offer.

However, “the possibility of bipartisanship still exists,” Dominguez said.

In a closely divided Senate, moderate Republicans willing to cross the aisle like Susan Collins of Maine, Lisa Murkowski of Alaska and Mitt Romney of Utah could play a significant role, she said.

Even though we’re still waiting on those two Georgia run-offs, the prospect of a Republican-controlled chamber is already causing President-elect Biden to rethink some of his cabinet picks.

According to Axios, Biden is now considering more centrist candidates and shying away from progressives like senators Elizabeth Warren and Bernie Sanders.