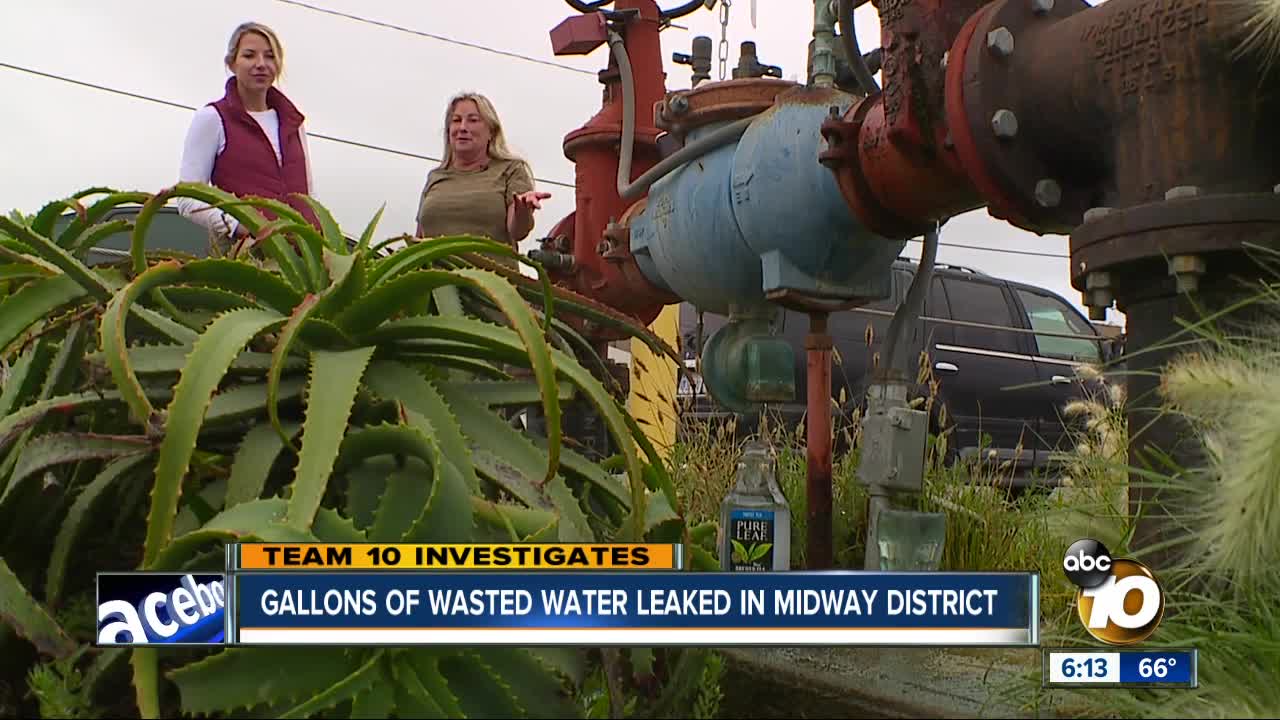 A water device in the Midway District may have leaked tens of thousands of gallons of wasted water. SAN DIEGO (KGTV) - A local woman says a water meter device in the Midway District has been leaking gallons of water for at least two years, but no one will fix it. She emailed Team 10 investigative reporter Jennifer Kastner after contacting multiple government agencies to report the wasted water.

The backflow device sits just off of Sports Arena Boulevard. When 10News visited it last week, it was dripping steady streams of water.

“It’s a problem,” says Diane Ang, who works nearby. She says there's so much leaking water, that the surrounding transient population uses the water to fills up their bottles. Containers of shampoo and soap wrappers are scattered around. Ang tells 10News that people bathe in the water. At one point, she says, people grew a garden next to the device because the ground was so saturated with water. “[They had] tomatoes and some other vegetables,” she adds.

There's no property tag on the device, so Ang called the City of San Diego at least three times but couldn’t get any help. She filled out multiple requests for assistance on the City’s "Get it Done” website, but there was no resolution. She was told the backflow device might belong to the Navy. She tells us that she made several attempts to get in touch with someone at the Navy. She says she spent at least two or three years trying to get the issue fixed.

10News wanted to know how much water was leaking, so we timed one of the flowing streams using a measuring bucket. What we discovered was that thousands of gallons of water may have been wasted in the last few years. We took our information to Mathnasium of Point Loma. The math tutoring company found that 21,000 gallons would have be lost in one year alone, assuming the water had been leaking at the same rate, continuously.

10News contacted the City of San Diego. A spokesperson directed us to the Navy.

A weeks ago, we reached out Naval Base Point Loma. This Tuesday, a media spokesperson for Naval Base Point Loma sent us an email which reads, “We appreciate everyone who took the time to bring this leak to our attention. Our Naval Base Point Loma Public Works team is taking action to fix the leak today. Conserving our natural resources is a high priority and is very important to all of us at Naval Base Point Loma. We encourage active participation by contacting us directly at nbpl_pao@navy.mil or use the “Get-It-Done San Diego” app for the City of San Diego. [It] is a quick way for anyone in the community to report service issues (street lights, traffic signals, trash recycling, sidewalks, street flooding, etc.)”

10News verified that the leak has been addressed. Ang says that she’s pleased, but doesn’t think it should have taken this long.