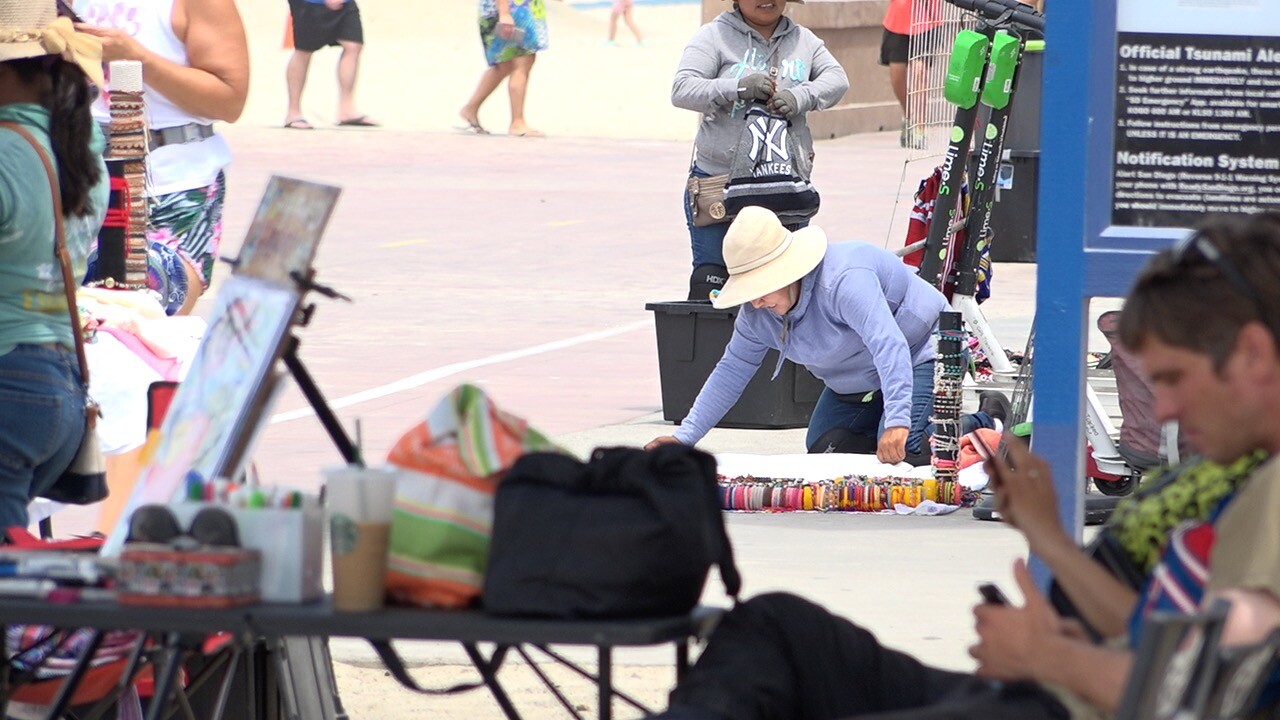 Copyright 2019 Scripps Media, Inc. All rights reserved. This material may not be published, broadcast, rewritten, or redistributed.
Jonathan Horn
A row of sidewalk vendors along the Mission Beach boardwalk Thursday, July 25, 2019

The sidewalk vendors who have set up shop along the Mission Beach boardwalk may soon have to a find a new place to sell their wares.

It's part of a series of regulations a City Council committee advanced at its meeting Thursday.

The vendors have come in waves after a new state law decriminalized the practice, reducing any fines to administrative. The city, as a result, is no longer enforcing its rules that conflict with the law.

As such, the vendors have set up shop along Mission Beach and other areas with heavy foot traffic. On Thursday, the boardwalk had vendors selling jewelry, sports team beach bags, and even tobacco pipes.

"I hope they don't take this area away from us, the tourists love us and we just love this area to set up and vend," said Tina Saito, who was selling the pipes and rock necklaces on the boardwalk.

The state law blocks the city from instituting restrictions based on economics, so it can't stop a vendor from opening outside an established business. The city can, however, enact regulations based on public safety.

As such, the city's proposed ordinance would require food vendors - like the ones that lined Balboa Park at Pride earlier this month - to have county health permits and a food handlers card. It would also restrict hours in parks, and place a summer moratorium on vending in Balboa Park.

The city would also block vendors from popular areas like Newport Avenue in Ocean Beach, Garnet Avenue in Pacific Beach, the Mission Beach boardwalk, the La Jolla Shores boardwalk, and the area around Petco Park on Padre game days.

Finally, it would disallow vendors from selling things like alcohol, drug and tobacco paraphernalia, and weapons.

The city economic development committee instructed staff to get more input on the rules from vendors before they go to the full council in September.